This is a big moment, even for a giant like Maruti Suzuki. The existing Dzire isn't just India's highest selling sub-4m sedan, it's the country's highest selling sedan period. It even managed this, albeit by a smaller than usual margin, in its final months of sale before the new Dzire reaches showrooms. This when the new model's impending arrival is a very known fact. Suffice to say, the new one had better be good! 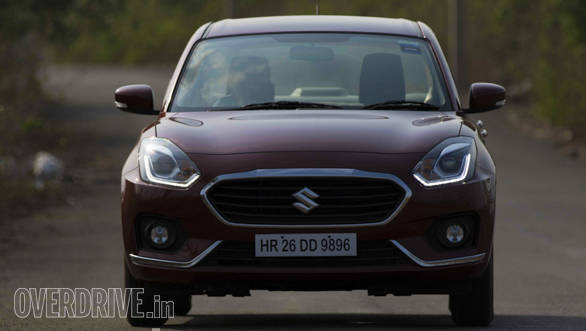 Let's start with the fact that the new Dzire looks more like a sedan than ever before. Despite still squeezing under the 4m mark, it looks more grown-up over the last model. The design is more curvaceous with a new clamshell bonnet and thick chrome garnishing around the grille and fog lamp housing. The tall front haunches spawn a line that drops as it intersects the door handles and rises once more towards the rear. This gives the side profile a sense of fluidity that reduces some of the unavoidable lack of grace that comes with squeezing a sedan within the 4m mark. 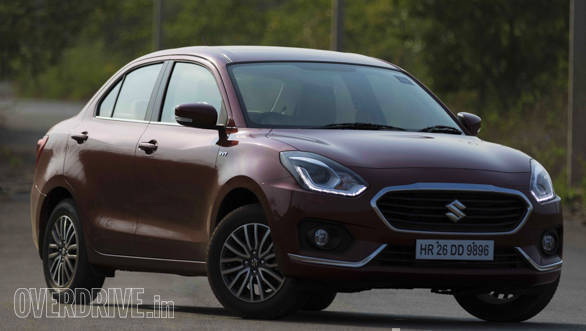 At the rear, a pair of handsome wrap-around tail lamps are connected by a fat lick of chrome. Look closely and you'll see smart circular LED detailing within the brake lights - a nice touch. The top ZXi+/ZDi+ models here comes with tasty 16-spoke, 15" 'precision cut alloys' that look the part. The lower ZDi/ZXi come with normal alloys with similar 185-section tyres while the VDi/VXi and LDi/LXi make do with smaller 14-inch steel wheels wrapped in narrower 165 section rubber. In all, the new Dzire uses a unique, curvaceous design theme with hints of similarity to the Baleno. I won't go so far to say it's the most handsome car in the segment, but it's a big step ahead. 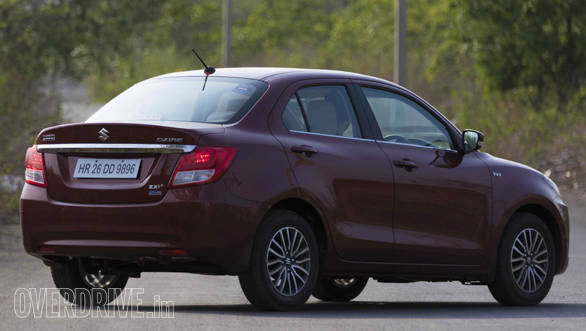 As with the outside, the cabin takes a leap forward. The immediate impression is that of much improved design and quality. The beige and black dashboard gets a more premium and grown up theme to siblings like the Ignis. The faux wood trim across the dash, steering bottom and door panels has a nice satin like sheen. You won't be fooled into thinking it's real wood, but it doesn't come across as tacky either. The ZXi+ and ZDi+ models get a large touch screen display with GPS navigation, Android Auto and Apple CarPlay. This crisp display uses a similar system to the Baleno and Ignis and is friendly to operate. The instrument cluster features simple, but smart, grey on black dials that flank a black-and white multi-info display. The display offers the typical trip and efficiency data but has some unused space, especially in the manuals where there is no gear position indicator. Makes you miss the lovely colour display from the Baleno. 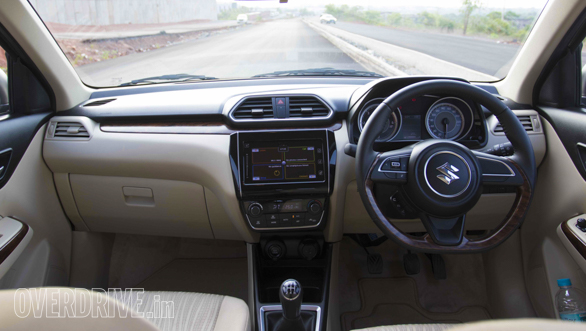 Towards the rear, Maruti has addressed our two primary complaints with the previous Dzire - rear kneeroom and boot space. Thanks partly to a 20mm hike in wheelbase and different packaging offered by the Heartect platform, the Dzire now offers plenty of knee-room, even with the front seat adjusted for a 6 foot tall driver. Headroom is a little lower than before, but our in-house, 6'1" tall driver found his head free of contact with the roof, but only just. We can't confirm if it is the segment best just yet, but rear space is certainly no longer a bone of contention. 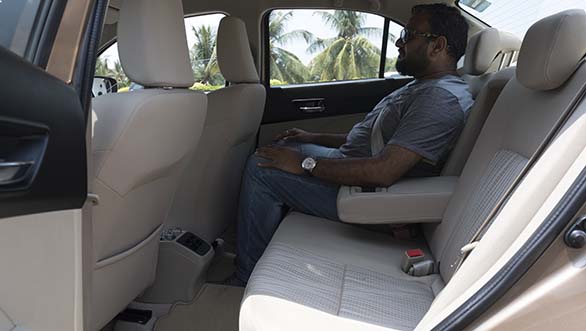 All models upwards of the base spec get a split rear ac vent, a 12v power socket as well as a central armrest with two cup holders. Stowage space is generous with two cupholders upfront, a space for your wallet or keys under the handbrake and full-size water bottle holders in the doors. In typical Maruti fashion, ergonomics are spot on, but we do miss reach adjust in the steering wheel, something the cheaper Baleno gets. The cupholder ahead of the front left aircon vent from the old car is gone too, pity that. Finally, the boot is up from a paltry 316-litres to 378-litres. It's not the segment best, but it's finally at a realistic level of usability. Overall fit and finish is at the pleasing levels we've come to expect from the the premium new Marutis. 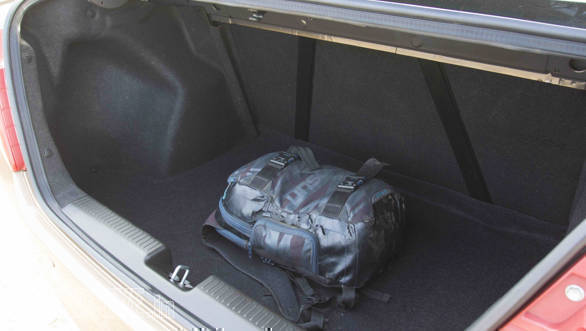 The Dzire springs no surprises in this department with two incredibly well-known engines on offer. The zesty 1,197cc petrol produces 83PS/113Nm while the workhorse 1,248cc diesel is good for the same 75PS/190Nm. Maruti has worked on calibration for both with a focus on improved efficiency. Thanks to this, as well as a lower drag coefficient and new, low-rolling resistance Bridgestone Ecopia tyres, the diesel Dzire claims a industry leading 28.4kmpl for the diesel and the petrol a very high 22kmpl. 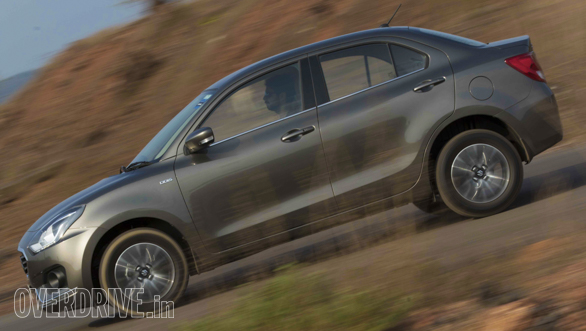 The drive experience on both is highly familiar with the petrol offering excellent smoothness down low and a zingy, rev happy top end. The diesel exhibits the same strong shove of power after an initial bit of lag and diesel clatter remains on the high side. Automated manual transmissions are available on both models and they offer a decent driving experience. Upshifts are a bit slower than we'd like, but downshifts are quick and well timed. Still, this is an option to consider solely for the sake of convenience - the manuals are still where the fun's at. AMTs are not for the driving enthusiast, but help in converting staunch, manual-only customers to the conveniences of two-pedal driving. They seem to be working well in that respect, with Maruti claiming up to 40 percent of sales going to AMTs in some models. 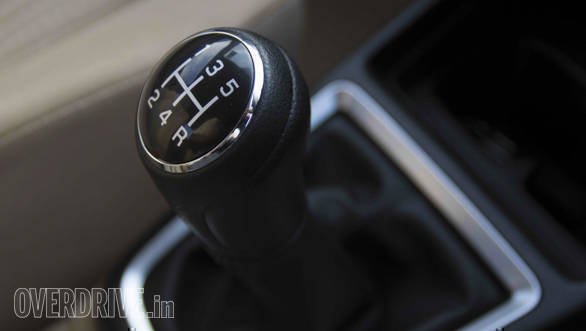 That said, the new Dzire sees a big improvement in NVH thanks to the new architecture that allows better noise reduction characteristics as well as a new, pendulum-style engine mounting that allows a tiny bit of motion, which in-turn, helps improve NVH levels. While engine and road noise are well controlled, we did notice quite a bit of wind noise at higher speeds. 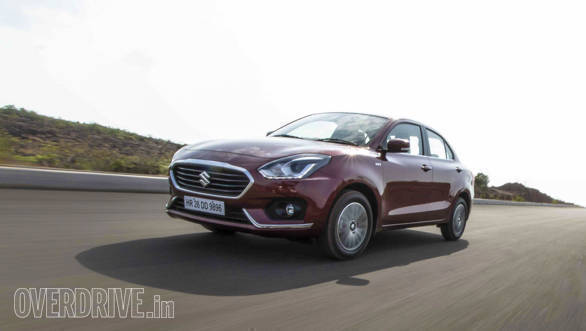 This is where the new Dzire really shines. This car has better ride comfort than any of the recently launched Maruti products, Baleno, Vitara Brezza and Ignis included. There's a new level of suppleness and bump absorbing capability to the suspension that was unanimously appreciated by everyone who drove the car. Handling too is well sorted with an eager willingness that shines through the chassis' tendency to roll when pushed hard. The roads around Goa didn't offer the opportunity for high speeds, but as with the Baleno, we expect planted highway manners.

Steering weight is well judged and consistent while braking performance is up to the job. We did find that the AMT-equipped cars offered better braking feel. Standard ABS is a feature that we're thrilled to see, one that hopefully will negate the need for deployment of the standard dual airbags. With the Dzire nailing its role of being the comfy, yet fun family car, we can't wait to see what's in store with the upcoming Swift, a car that should be on the naughtier side of things! 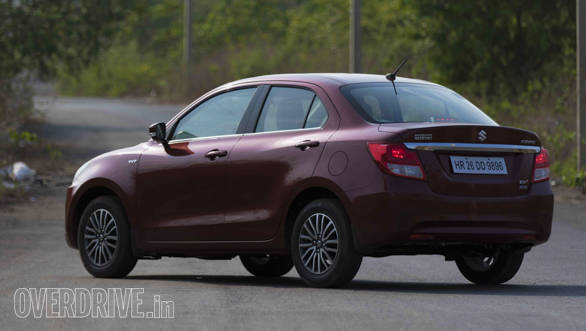 To sum up, Maruti have taken what was a tremendously successful car and turned into a machine that now fully deserves it. The new one is an improvement in nearly every area. It now commands a more premium feeling with vastly improved levels of comfort and features. Starting at Rs 6.5 lakh (all prices on-road Mumbai) for the LXi, the base variants are priced well and are on-par or slightly cheaper than most rivals. However, some may find the Rs 11.3 lakh top end ZDi+ AMT with its auto projector LED headlamps (standard halogens on the rest), reverse camera and clever touchscreen a little too expensive. 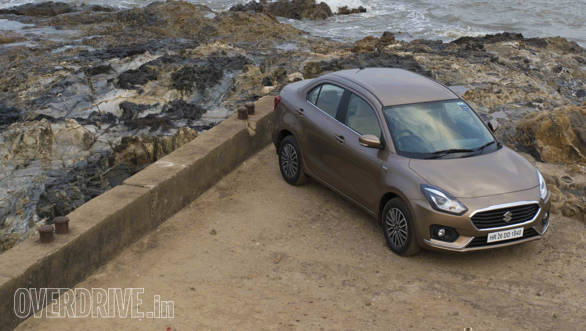 Positioning wise, the Dzire is roughly Rs 20-60 thousand more expensive than the equivalent Baleno variant. This means, the Baleno, Ignis, Dzire and even Ciaz are all priced fairly close to each other, with the new Swift due to enter the fray as well. I like the fact that Maruti has not purposefully downgraded one over the other simply to have a staggered price range. This is the era of choice and Maruti/Nexa is ensuring you have plenty of it within their own showroom walls.

Back to the Dzire, careful studying of the features list would suggest that ZXi/ZDi (Rs 8.34 lakh and 9.68 lakh respectively) models seem like the smart choice. They're well positioned against their rivals while costing a significant Rs 1.1 lakh less than the corresponding + models. In the past, the Dzire may have been the sales leader but it wasn't our pick of the segment. That may be about to change. Stay tuned for the full comparison!