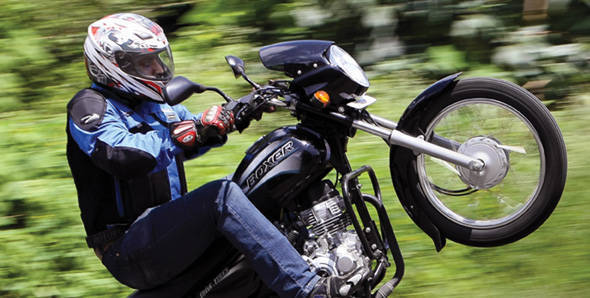 Bajaj Auto seems to be following in Hero Motocorp's footsteps, but with a twist. While Hero has famously created motorcycles at different price points in similar segments using the same engine with different cosmetic packages, Bajaj is trying to offer motorcycles in different segments using the same engine displacement. Say hello to the third 150cc motorcycle from Bajaj Auto, the Bajaj Boxer BM150 in India. The Boxer in this case uses a further stripped down version of the Discover 150's engine, and has only one spark plug. While the Discover 150 is targeted at the urban commuter who heads to office daily with a briefcase, the Boxer 150 is targeted at the semi-urban/rural customer who it appears will head to the marketplace with produce. Let's get to know it a little better.

Remember the 100cc Boxer that was sold years ago? It was a big hit for Bajaj, and was immensely popular  more so for its value for money proposition and efficiency rather than elements like styling and design. The target market for that bike was the entry-level motorcycle segment, where functionality prevails over form. It's styling was basic, with a round headlamp surrounded by a shroud at the front and a nothing but a steel grab rail at the rear. Bajaj Auto has given the Bajaj Boxer BM150 in India a styling package that is all-new but strongly reminiscent of the old Boxer in a bid to capitalize on its success. Hence, what you see on the Boxer 150 is a round headlamp upfront, with a small shroud, looking similar to the old Boxer's.

The instrument cluster is a basic two-pod unit and gets only a speedometer and fuel gauge. The tank is a simple unit and has minimal graphics with Boxer written on both sides in a large font. At the back of the Boxer's wide seat is a robust looking steel grab rail reminiscent of the old Boxer's and is replete with places to anchor loads. Below this sits the tail light, which is identical to the old Boxer's. Overall build quality is decent, but the quality of plastics is not even close to that.

The Bajaj Boxer BM150 in India uses the Discover 150's 144.8cc single-cylinder DTS-i unit, but sans one spark plug. The engine makes 12PS of power at 7500rpm and 12.26Nm of torque at 5000rpm, which is roughly 1PS and 0.5Nm less than the Discover 150. The engine is now mated to a 4-speed gearbox with short-ratios, instead of the Discover 150's 5-speed unit. Given its market positioning, the Boxer 150 has been tuned for a strong initial grunt and punchy mid range.  This was obvious as I rode the bike in traffic. Shorter ratios eliminate the need to change gears frequently, and the Boxer 150 is happy pottering in town at speeds as low as 25kmph even in fourth, and starts accelerating as soon as the throttle is opened. In terms of numbers, the Boxer managed to attain 60kmph from standstill in 6.9 seconds, before running out of steam at 94.6kmph. These figures without doubt are way ahead of every 100 and 125cc commuter motorcycle in the country, making the Boxer 150 the quickest entry-level motorcycle in the country. The engine has been tuned to do sane speeds, and once you cross 60kmph it starts feeling harsh. Cross 80kmph, and the engine feels seriously stressed  but it can safely be said that not many Boxer 150s will attain these speeds in their entire life cycle.

Quality of gearshifts is decent and shifts have a clunky feel. But the biggest let down in this department is the all-down shift pattern, something which most of us have forgotten over the years. Being a budget bike, the Boxer 150 has to make do with 130mm drum brakes at both ends. In the brake test, the Boxer 150 managed to stop from 60kmph in 2.98 seconds, and covered 22.69 metres. Coming to the big question, the Boxer 150's biggest strength is its 150cc engine, and hence fuel efficiency is not really this torquey commuter's forte. In the city run, the Boxer managed to cover 48.6km on a litre of fuel, the number going upto 58.1km on the highway. This translates to an overall efficiency of 50.9kmpl.

With the Boxer 150, Bajaj is targeting that segment of motorcyclists who are more interested in getting from point A to point B than going corner carving. The Boxer as a result does not exactly delight you in case you decide to explore the motorcycle's dynamic limits but does not fare badly either. The front end feels light, giving the bike a nimble feel in the city but tyres tend to rob you of confidence, especially in the wet. The Boxer 150 comes shod with a 3.00 inch tyre upfront and a 100/90 section at the rear. The tyre sizes match those of performance oriented 150s like the Pulsar 150 and the like, but remember this is an inexpensive motorcycle, and hence, Bajaj has been cost conscious in several places. As a result, the Boxer gets 'Mahagrip' tyres, a brand unheard of, instead of the usual MRF Nylogrip or Eurogrip rubber. Dry grip is adequate. In the wet, the 100 section rear tyre feels okay, but the straight ribbed front tyre tends to start losing grip.

Around corners the Boxer does not egg you on to push harder but is able to hold its line without much trouble, with the rectangular section swingarm aiding handling. The Boxer 150 has been designed to endure bad roads and harsh terrain, and this is one thing the bike does well. Its suspension works well in sync with the front forks and single-downtube chassis to soak up bumps, undulations and back breaking potholes, its strengthened components adding to the bike's unmistakable solid feel. I rode the Boxer on Pune's broken roads continually, giving its suspension an extensive workout, and over the four days of testing not once did the bike have any trouble facing the challenge, even with a pillion onboard.

Bajaj is very clear that Boxer 150 is a no frills motorcycle targeted at the rural and semi-urban markets, and has designed the bike to take a battering day in and day out. But in the process of getting the job done, the bike loses focus on several other important aspects. Styling is bare basic, equipment levels are spartan and quality of plastic components leaves you in no doubt that this is an inexpensive bike. But the Bajaj BM Boxer150 price in India of Rs42,000 ex-showroom, Pune is almost a shock. This in fact is less than a whole bunch of 100cc commuters sold in the country today. If you are looking for a rugged motorcycle that can take the beating of harsh conditions regularly and aren't really bothered about anything else, the Bajaj Boxer BM150 makes sense for you.