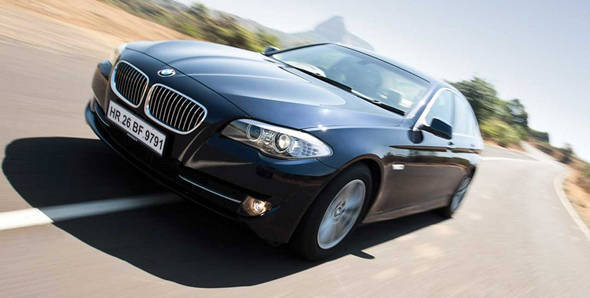 The previous generation E60 BMW 5 Series was the biggest selling car in its segment and most of the sales were contributed by the 520d powered by the smaller 2.0-litre 4-cylinder diesel engine. Offering both luxury and efficiency, the car was an instant hit. However, when the all-new F10 5-series was launched in 2010, the company introduced four engine variants which included the 525d and 530d diesels, both being 6-cylinder engines. However, the only variant missing was a four-cylinder diesel, until now. BMW has introduced the fifth engine variant in the form of the new 520d. This variant is now the entry level variant of the F10 5 Series and is powered by a revised version of the BMW 2.0-litre diesel engine. Is the 520d the most sensible 5 Series to buy today? Let's find out.

The 520d is powered by the same turbo-charged, four-cylinder 1995cc diesel engine found under the hood of the previous 520d. But it has now been revised and develops 184PS of maximum power, 8PS more than its predecessor. Maximum torque has increased by 30Nm to a healthy 380Nm that comes from as low as 1750-2500rpm. The engine is responsive and the throttle response is instantaneous. In fact while driving, it feels like a bigger engine is under its hood.  The car can cruise comfortably on the highway and driving in the city is effortless due to the engine being mated to an 8-speed automatic gearbox similar to the one found in other 5 Series variants. The ratios are well matched and extract the most from the engine. The engine is audible at idle but excellent damping means there's no cause for complaint inside. The overall weight of the car is also reduced because of the 4-cylinder engine. BMW claims that frictional losses have been reduced by around 3.5 per cent compared to the previous engine and fuel efficiency as well as power has increased. The engine may not be as refined and powerful as the 530d's 3.0-litre engine or even the 525d but it does its job well.

The 520d is heavier than the 320d. With both the cars sharing the same engine; we expected the 520d to be sluggish. But the 380Nm of torque combined with an 8-speed gearbox enables the car to reach 0-100kmph in just 8.58 seconds. It is surprisingly quick compared to the 320d which hits the ton mark in 8.4 seconds. The quarter mile is covered in a respectable 16.44s. Acceleration is strong throughout the rev range and the quick shifting gearbox helps in shaving off those extra seconds. The top speed we achieved was 209kmph. While cruising the power delivery is linear and pushed hard the gearbox downshifts quickly and stays in the powerband.  In kickdown mode 40-100kmph comes up in a quick 7.92 seconds.

The 520d returned impressive fuel efficiency of 14.7kmpl on the highway. We were unable to test the city fuel efficiency but ARAI figures state it to be 18.4kmpl which makes the car the most fuel efficient in its segment and that is commendable. The ARAI figure is achieved in combined cycle testing. This should comfortably ensure its success and make it the highest selling 5 Series variant in India.

BMW should have introduced the 520d earlier. The power is sufficient and the fuel consumption is excellent, making it an economical car to run. The ride quality of the car is good thanks to the soft suspension but there is slight roll and it doesn't feel very enthusiastic to drive. The 520d however is fitted with 17-inch wheels similar to other 5 Series variants. Ride quality could have been better if BMW offered 16-inch wheels with higher profile tyres. Though the 520d is the entry level 5 Series, it is in no way a corporate edition variant, it sports the same interiors and features as in the more expensive 525d.
Also available are two interior trims and ten body colours to choose from. The upholstery is also similar to the other variants offering five different combinations. It features a single disc player with auxiliary and USB input instead of the 6-disc changer. iDrive is standard and the 7-inch on-board monitor is similar to the 523i and 525d. The BMW 520d is competitively priced at Rs 36.90 lakh (ex-showroom, Mumbai), only Rs 5.40 lakh more than a 320d Highline. It makes sense to extend the budget and go in for the 520d. But if you want more power, the 525d or the 530d make more sense. As regards everything else, the 520d won't disappoint. BMW has a definite winner on its hands.
BMW 5 Series 2014 Full Spec
Price (Ex-Delhi)
Starts Rs 55.4 Lakhs
Displacement
1995cc
Transmission
Automatic
Max Power(ps)
252
Max Torque(Nm)
400
Mileage
18.12 Kmpl
Tags: diesel  |  luxury sedan  |  bmw 520d