This one's for the ages. The cars here are two of three entrants in a luxury car battle that has raged on for decades. The Mercedes-Benz E-Class and Audi A6, with the BMW 5 Series have each been cornerstones in how we perceive their respective brands. 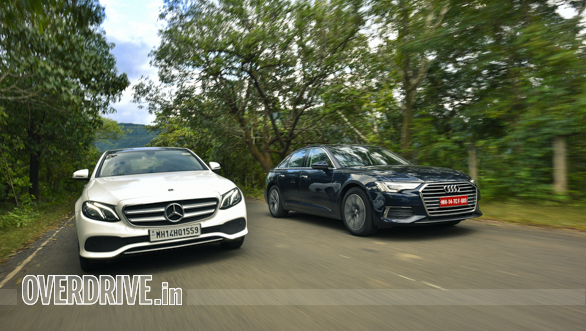 This competitiveness doesn't seem to have subsided even in the current state of the auto industry. SUVs and EVs might be the headline grabbers now but the luxury sedan still has quite some life left in it. The Mercedes-Benz E-Class LWB is proof of this. It's the largest selling luxury car in India now. So there is no better test than this for the completely new Audi A6, seen here in its 45 TFSI petrol guise. Audi has decided its future in India rests on petrol and electrified vehicles, hence our decision to pit the petrol E 200 against its newest offering. 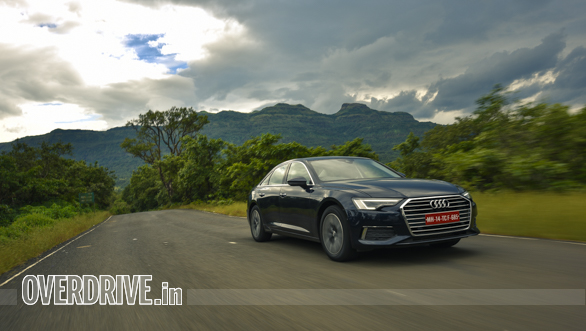 Both the E-Class and A6 have an understated look to them but still manage to convey a sense of sophistication. The A6 is now 7mm longer, 2mm taller and 12mm wider than before. This helps it interpret the classic cab-rearward sedan look in a new way. There is more aggressiveness overall thanks to this but in true Audi fashion, this is never brash. The few lines on the bodywork accentuate this sense while the sharp head and tail lamps serve as a further reminder of this car's new-age technical vibe. 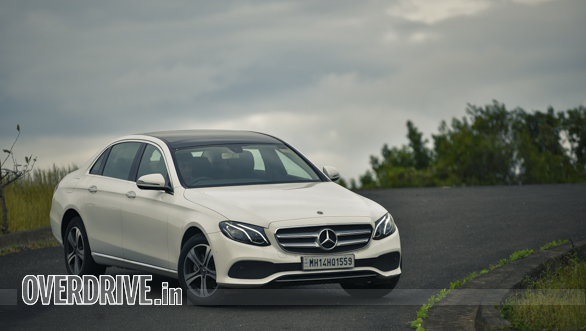 The E-Class is more old-school and gives off a more stately, limo-like feel. This is mainly thanks to its noticeably extended rear section. In this, it's very good at replicating what the S-Class does. Its bodywork is more shapely, which helps with this sense even more. The E-Class is also very restrained in how it uses chrome, there's just enough to brighten things up. There's more of it in the Audi but the treatment is very smart, especially on the grille and in the rear section. Ultimately, as a reflection of the money you've spent to own these, both do a good job. 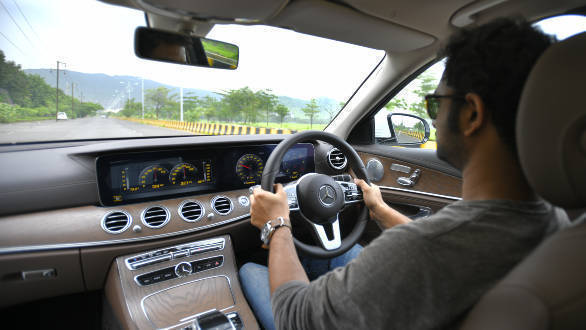 If you had any doubts that the E 200 could convince buyers it was a mini S-Class, one look inside dispels that thought. The sweeping dash design, the widescreen cockpit, the buttons and the layout, all seem like they come from the Mercedes flagship. Mercedes manages to use the same basic elements to create a unique ambience in each of its models, the E-Class is no different. Much of this distinction comes from how well-finished everything is. The A6 and E-Class are equally well built but the materials and finish in the E-Class is noticeably plusher. There seem to be no hard plastics anywhere in the vicinity, unlike the ones you find in the A6's door handles and footwells. 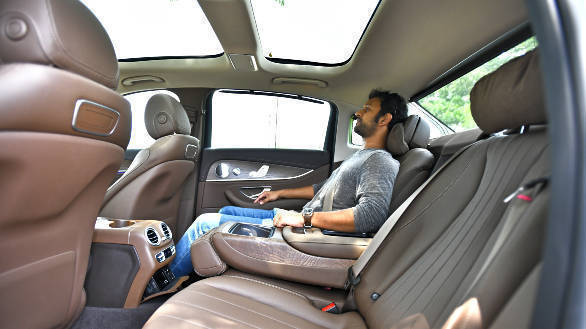 All of the extra 140mm of the LWB E-Class' 3,079mm wheelbase has gone into the rear passenger section and Mercedes has used this to create an impressively luxurious space. The seats themselves are softer, larger and more supportive than the Audi, especially at the back. Adding to this, these can also be reclined, which means passengers can be driven around very comfortably. It also trumps the new Audi in terms of features for the rear passengers. You get a dual-pane sunroof, a rear-touch control panel, and each passenger has individual controls for all the sun-blinds at the back. The memory function and control of the front passenger seat are other small but special touches. There's wireless charging for both, but in the Mercedes, it's placed at the back. The Audi only gets a single-pane sunroof but adds power steering column and four-zone climate control. 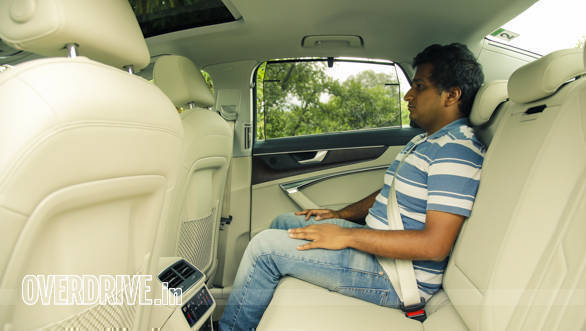 Improvements have been made to the A6's rear seating too. The rear passenger section is longer by 12mm. This is quite evident in how much legroom there is but this space still can't match the E-Class' lavishness. This is because the seats themselves could have done with a bit more under-thigh support, a recline function is also a big miss. 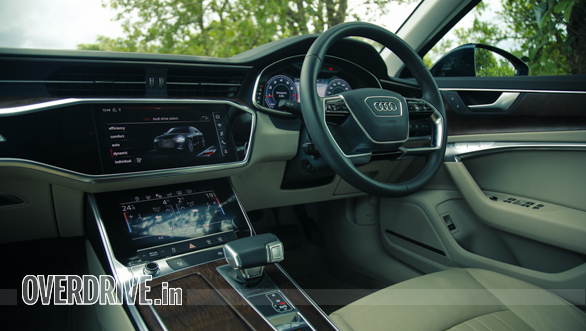 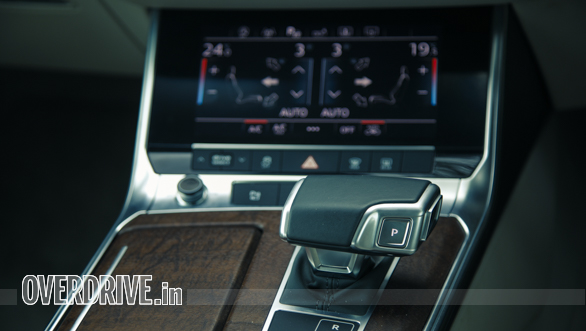 That's not to say that the A6 feels basic. It's still a striking place to spend time in, highlighted by the new stacked dual haptic-feedback screens. The new theme uses flat surfaces, which then seem to layer on to create a clean, techy vibe on the inside. Most physical controls have been done away with apart from the ones for the drive select program, volume control and some other functions. The 10.1-inch infotainment screen controls most functions and has less of a learning curve than Mercedes' system. There are fewer sub-menus and most functions are presented on the home screen. The lower 8.4-inch unit controls the climate settings and some functions like the parking sensors and lane departure warning systems. The Virtual Cockpit instrument cluster continues to be crisp and easy to use, seemingly packing in even more legible information than before. On the move, the Mercedes' functions seem easier to control given the many physical redundancies. The haptic-feedback buttons in the Audi seem to require more attention to register an input. 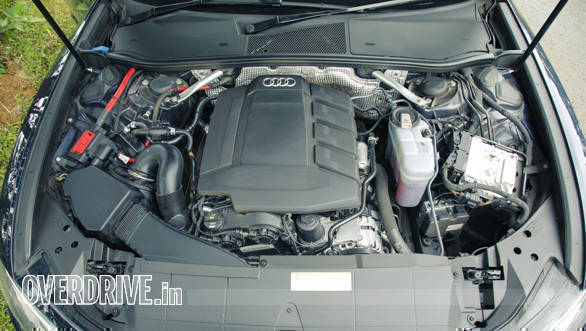 With the A6, Audi is currently offering a single BSVI compliant 2.0-litre petrol motor with 245PS and 370Nm. This makes for a brisk 0 to 100kmph time of 6.9s. But what isn't seen in these numbers is how refined this motor is. It's easily the class leader, with no engine noise seeping into the cabin even around 3,500rpm. The Audi A6 is also superior at controlling wind and tyre noise. There are no stray vibrations felt through the steering wheel or the footwell, which the E 200 is sometimes guilty of. The Mercedes' engine is also quite audible over the 2,000rpm mark.

The E 200 also gets a 2.0-litre petrol but makes 197PS and 300Nm, getting from 0 to 100kmph in 8.4s. But don't discount it just yet. In slow-speed, stop-go traffic, the E-Class is as adept as the A6 in metering out power and keeping the engine on the boil. The engine's full reserve of torque is available in most low-speed situations in both cars. The A6 just makes this more evident given the wider powerband. The E-Class conversely has a measured response that builds the further you rev it. 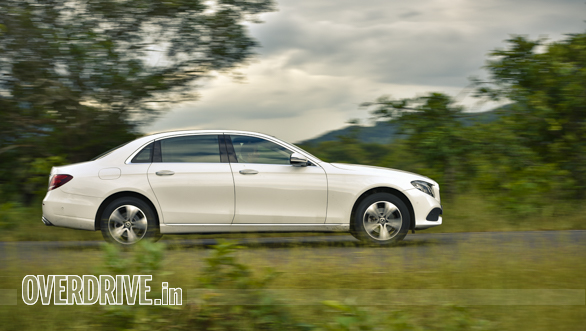 The cogs in the E-Class' 9-speed torque converter are more attuned to city driving, helping it match the A6's in-gear acceleration times. The Audi gets a 7-speed dual-clutch. In urban conditions, both units work silently and without any intrusions, the Audi a bit more seamlessly.

Out on the highway, in general operation, Audi's larger outputs put it at an advantage again. At triple-digit speeds, there's more eagerness in the Audi and fast overtakes are easily dealt with. The Audi DCT's inherent construction means that it takes a touch more time to drop down to the optimum gear for an overtake. The E-Class' auto is slightly more responsive during passes but the engine's lower outputs mean building speeds around the three-digit mark takes more effort. 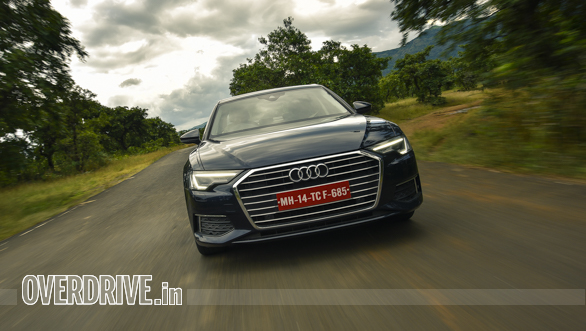 Comfort is the name of the game for the E-Class. It's exceptionally pliant over our inconsistent surfaces. At low speeds, it'll soak up everything from small scars to bigger craters without much of it filtering in the cabin. You might hear some of the bigger bumps, but there's no reaction in terms of body movement. This only improves as speeds build, with the Mercedes wafting along over everything. Some of the bigger cuts might jolt the suspension at speed but the cabin stays mostly undisturbed.

For the A6, the keyword is balance. It does almost everything that the E-Class does equally well. It's just that a bit more of it is perceptible to occupants. Over an extended bad patch, the suspension seems to rebound a bit quickly, causing a bouncy sensation. It's not uncomfortable but that heightened sense of isolation, especially at the rear, is missing. This is a commendable effort by both cars given that they don't get air-suspension in these versions. We found these systems better than some of the air-springs these carmakers put in their higher-end products. 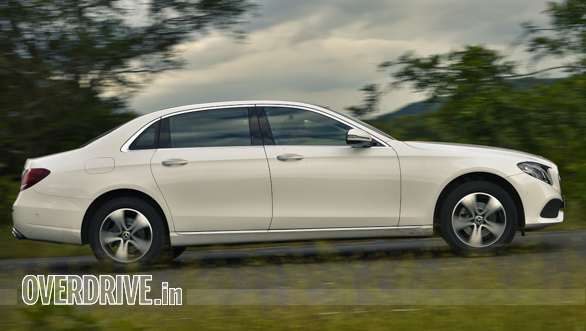 The Audi has a distinct edge when driven hard. It feels light and agile, turning in briskly and holding its line without any drama. It also stays flat over high-speed sweeping curves, with no unexpected body movements. Here the E's larger dimensions and comfort-bias are most visible. In a straight line or less aggressive manoeuvres, these factors are not as evident. But quick inputs bring some lean, and a sense that the rear-section is following the line of the front wheels, rather than being one with it. Having said that, this is not disconcerting, and the Mercedes sticks to its line unless strongly provoked. 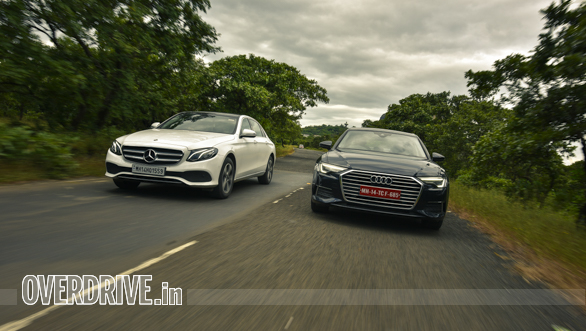 The E 200's steering set-up balances this softness to some extent. There is a nice heft to it which brings more precision to proceedings. The Audi's steering is light and easy at city speeds but adds weight as speeds build. We would have liked this effect to be a bit more, there is an underlying lightness at high-speed that robs it of a sense bit of precision. Both get drive modes that alter steering feel, shift points for the gearbox and throttle maps. We liked the Auto setting in the Audi Drive Select. It changes settings on the move naturally to match driving inputs.

You're pretty safe in both, the E 200 gets seven airbags while the A6 gets eight. The Mercedes also gets a brake assist system that preps the brakes for full pressure in anticipation of an obstacle. Further, the E 200 also gets soft-close doors. Conversely, the A6 gives you lane departure warning as standard. This seemed like one of the more intuitive systems around, quite good at picking out our erratic lane markings. 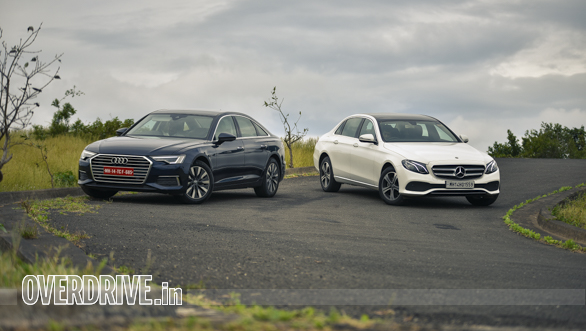 The E 200 costs `71.94 lakh in its top Exclusive trim seen here, a `1.63 lakh premium over the Audi A6 45 TFSI Technology's 70.31 lakh. This seems justified given the E-Class' larger footprint and added conveniences. You can get lesser variants of both, starting at `67.28 lakh for the E 200 and `64.42 lakh for the A6, but they miss the extra luxury quotient of these cars. The extra cost of the top-spec cars is also something that you can recover with some smart financing. Both also come with numerous maintenance packages and buy-back options, so living with them will likely be hassle-free. 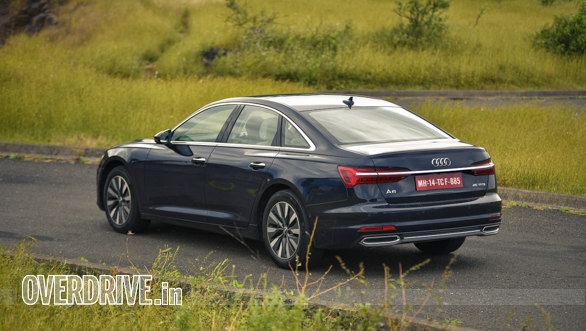 As for which one is better, it depends on what you expect from your premium sedan. If you get driven around a lot and want a cosseting, rejuvenating place to spend time in while on the move, the E-Class is the one for you. No questions asked. Very few cars, if any, under the Rs 1 crore mark match its rear-seat experience. The A6 brings more parity to the mix. It might not be as indulgent outright but seems to provide for both the driver and passenger in an equal vein. It's got a quieter, more accomplished drivetrain than the Mercedes and comes with a dynamic set-up that can be both comfortable and enticing when needed. It gives you the luxury to choose, and will happily switch from a calm luxury car to a fun sedan that likes being driven hard whenever you want it to. This duality makes it feel more complete and just helps edge out the E 200 here. 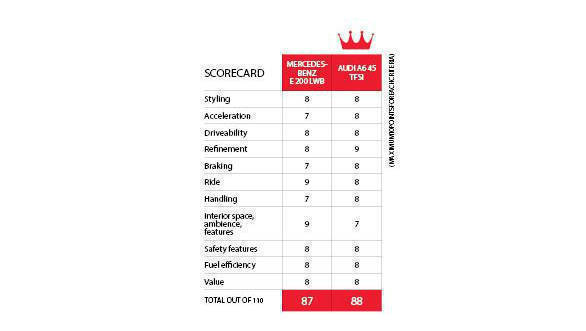