If retro motorcycles are your thing, 2019 was action-packed, given the number of retro-classics launched across segments and price points. I particularly liked the Honda CB300R for what it is  a compact, light, retro-styled quarter-litre naked streetbike that impresses on various fronts. The only chink in the armour though is its high sticker price, as Honda only assembles it here currently and is yet to start manufacturing the motorcycle locally. But now Benelli has entered the exact same niche, taking the exact same route. The Benelli Leoncino 250 effectively has several similarities to the Honda CB300R like the retro-styling, similarity of intent and price point too! So if in the market for a quarter-litre naked that's fun to ride and retro-looking, which one of these should you be looking at? A head to head comparison test helped us decide. 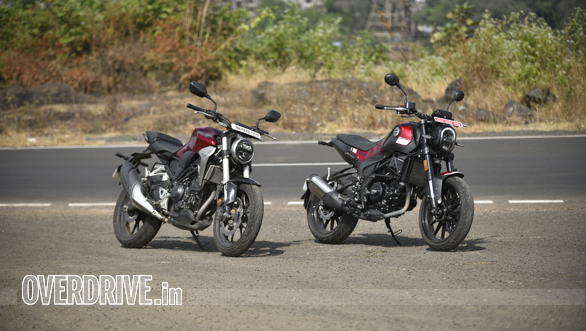 The Honda CB300R and Benelli Leoncino 250 are two of the newest quarter-litre naked streetbikes and both sit very close to each other in the segment, as far as positioning goes

The Leoncino 250 follows the same design ideology as the Leoncino 500, though the 250's face looks better thanks to the more appealing looking headlight and rectangular TFT display instrument cluster. The rest of the body style is scrambler-esque and similar to the Leoncino 500's, be it the tall handlebar and resultant upright seating position or the fuel tank design. The 250 also gets the little lion on the front fender like the 500, though in this case it is finished in black and not steel grey like the 500's. Design details are interesting and fit-finish levels are better than the 500 and in isolation, the Leoncino 250 feels premium, as you would expect a 3 lakh rupee motorcycle to. 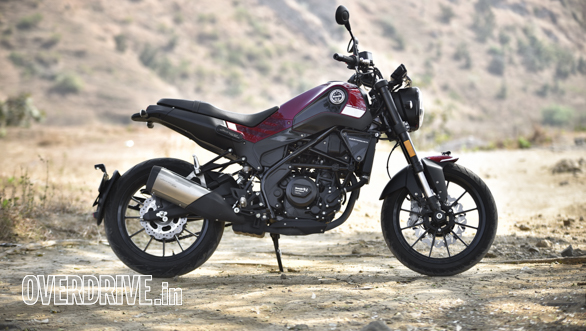 The Benelli Leoncino 250 follows a lot of its design from its elder sibling, the Leoncino 500 and has been styled look like a scrambler

But park it next to the CB300R and things change. The CB300R looks better from every angle courtesy its sharper lines and also has more road presence. It looks a lot like the CB1000R which makes it look as if it belongs to a segment above, instantly. I also like the CB300R's headlamp design better  it just looks classier. Its fuel tank also looks more appealing than the Benelli's, as does the stepped seat. The CB300R's display is a bit disappointing though and I wish it was bigger and easier to read on the go. The Leoncino's display has the better layout, but is let down by its low resolution. 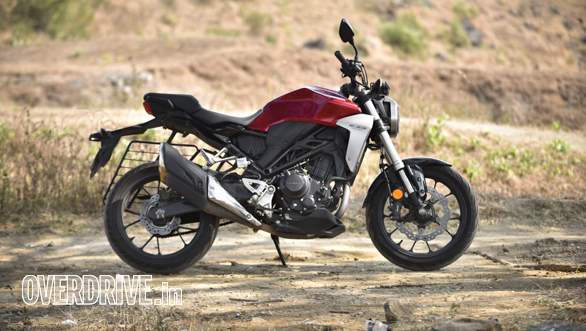 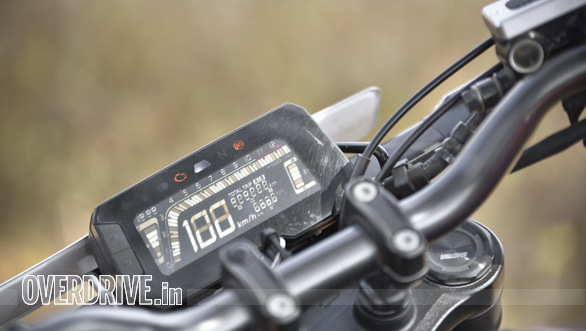 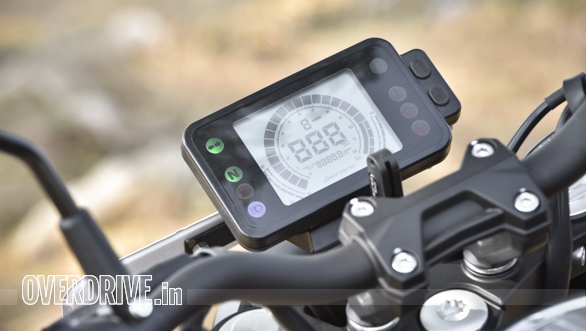 Both motorcycles sport upside-down front forks that add to their muscular stance, but the CB300R's front end looks more premium courtesy its silver finished forks. The CB300R's switchgear also feels more premium as the quality of plastics is simply better, though the positioning of the switch for the horn above the turn indicator toggle is quirky. On the whole, the CB300R is more appealing looking and in fact, its design language may be retro, but there's a hint of modern-ness to the styling which helps it appeal to a wider audience. Not to mention the fact that being a Honda the CB300R boasts a superior build quality and fit-finish levels, which gives it an edge over the Leoncino 250.

The Leoncino 250 uses a 249cc, liquid-cooled single cylinder engine that puts out 25.8PS and 21Nm. In comparison the CB300R uses a 286cc, liquid-cooled single cylinder engine that offers 30.4PS and 27.4Nm. So the Honda has an instant advantage over the Benelli, not to mention the fact that the CB300R's peak power and torque are produced at lower revs than the Leoncino. Effectively the Honda engine stresses itself lesser than the Benelli engine, at the same revs. The Honda mill also feels slightly smoother, while the Leoncino's engine seems to have some bit of vibration inherently. 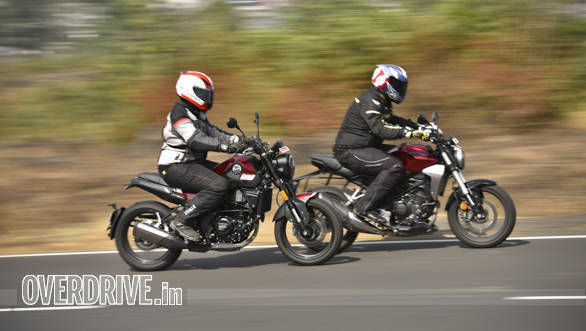 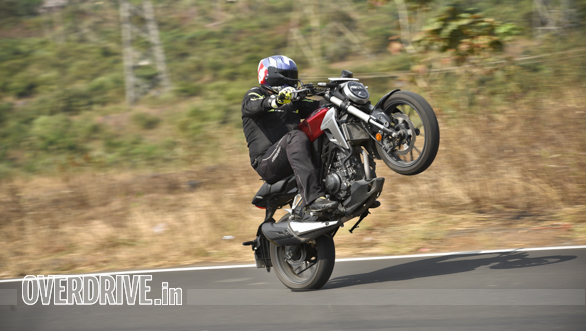 Of course, the higher outputs mean the Honda is the quicker motorcycle of the two, as confirmed by our acceleration tests. Another advantage for the Honda is its significantly lower kerb weight of 147kg as compared to the Leoncino 250's 164kg, which translates to a far better power to weight ratio. The CB300R managed the 0-100kmph feat in 7.1 seconds, which is way quicker than the 11.04 seconds taken by the Leoncino 250. The CB300R is also quicker when it comes to in-gear acceleration, which gives it an advantage when riding in traffic. That said both motorcycles offer good grunt at low revs and equally fun to ride in traffic making either of them well-suited to commuting, but the Honda just feels quicker, courtesy its higher torque output. 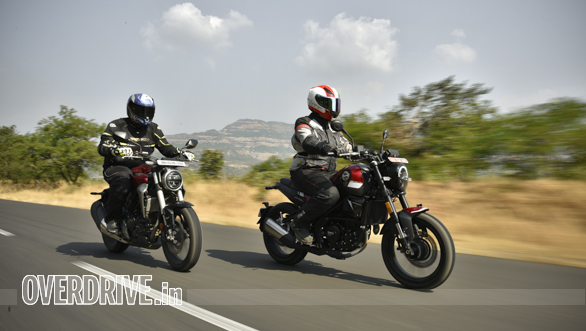 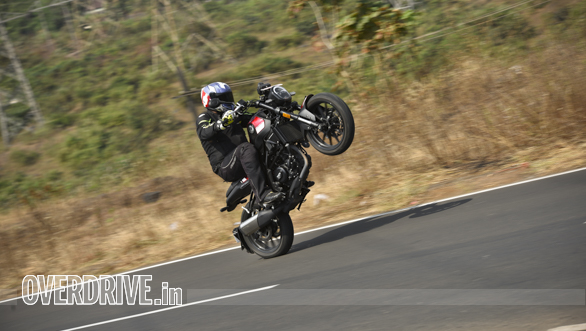 The Benelli Leoncino 250 is not far off the Honda CB300R when it comes to rearing its head, just that it calls for some more effort given its lower outputs and higher kerb weight

Both engines are mated to six-speed gearboxes and ratios on both are well-spaced, which allows both motorcycles to hit speeds in excess of 140kmph rather easily. Coming to fuel efficiency, the CB300R managed 34.10kmpl in city and 39.80kmpl on the highway in our tests, which is again slightly higher than the Leoncino's 31.27kmpl in city and 37.24kmpl on the highway, despite the Honda's higher power and torque outputs. Overall, the CB300R's powertrain makes for a big advantage for it, be it in terms of performance, refinement or fuel efficiency.

In terms of equipment there isn't much differentiating the two motorcycles, as hardware on both is pretty similar. Both use upside down front forks and monoshocks are the rear. Interestingly, the Leoncino offers a better ride than the Honda, soaking up bumps and undulations better and feeling plusher on broken or bad roads. The CB300R's front forks are stiffer in particular which results in a bit of a jolt if you go fast over bumps and potholes, though the rear monoshock is relatively softer and does a better job on the same undulations. 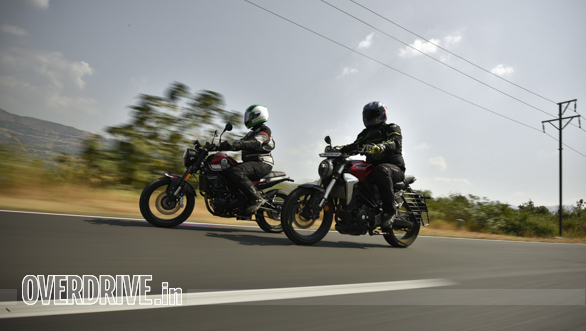 However, the firmer front end on the Honda results in a sharper handling package, expectedly. The CB300R is more confident making directional changes quickly in traffic, while also feeling more surefooted. That said, the Leoncino 250 is shod with Metzeler M5 Sportec tyres that are grippier than the CB300R's Michelin Pilot Street tyres which help it claim some ground and close in on the Honda, be it in traffic or when riding fast around corners. The Honda's lighter kerb weight also helps it through corners, but at the same time, the Leoncino 250 is able enough to stay in the Honda's rear view mirrors at all times. 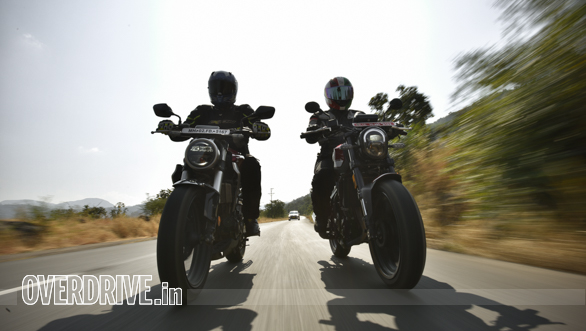 The Honda CB300R is shod with Michelin Pilot Street tyres which offer good grip but in comparison, the Benelli Leoncino 250's Metzeler Sportec M5 are better in terms of outright grip

That said the Honda's chassis helps it feel more planted when leaned over into corners despite its shorter wheelbase of 1,344mm as compared to the Leoncino's 1,380mm wheelbase. The seating position on both motorcycles is different from each other, as the Leoncino 250, positioned as a scrambler, has the wider handlebar that also offers more leverage and is more suited to riding distances. In comparison the CB300R's handlebar-seat-footpeg triangle is more compact, akin to a streetfighter, making it feel more suited to city riding. Both motorcycles are equally comfortable on open roads though.

The Leoncino 250 is yet another example of how Benelli has upped its game  be it in terms of performance, handling or refinement and build quality. The Leoncino 250 is certainly a commendable job on its own and impresses as a compact, fun to ride everyday motorcycle. However, the Honda CB300R feels better on almost every front by varying margins. The Honda's biggest advantage is its powertrain though and there's no denying that the engine and gearbox are probably the most important aspects of a performance machine. 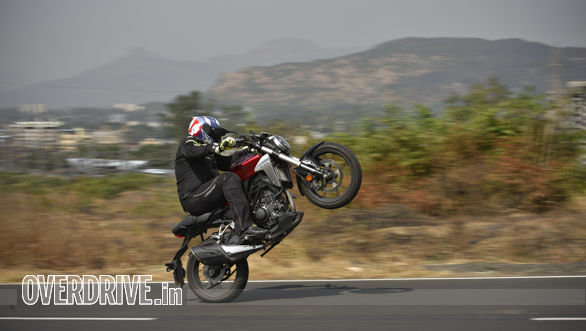 The Honda CB300R is a better packaged motorcycle as compared to the Benelli Leoncino 250 overall, with its lighter kerb weight, higher outputs, better build quality and a more universally appealing design, not to forget, all at a slightly lower price, which help it win this comparison test

The CB300R also has a more universal appeal as far as the design is concerned, while also boasting a better build quality, as you would expect from a manufacturer of Honda's repute. The CB300R retails at Rs 2.41 lakh ex-showroom, which is a shade lower than the Leoncino 250's ex-showroom price of Rs 2.50 lakh. Effectively, the CB300R offers more motorcycle, at a lower price which adds further to its more impressive ways, thereby helping it score better to win this comparison test.