Hyundai has brought in the facelifted Elantra with the 'connected car' tech it debuted on the Venue, right at a time when new manufacturers in the country have two new SUVs in a lower price bracket. SUVs that have caused quite the stir, mind you. So apart from those to pick from, your choice of a roughly Rs 20 lakh car extends to another fairly recent launch, the Honda Civic, itself a segment-reviver of sorts, and the classic Skoda Octavia. Pitting the top variant petrol automatics against each other shows a huge price difference between the Skoda and the others  but can the Elantra hold its own against the timeless Octavia and the current best-seller, the Civic? 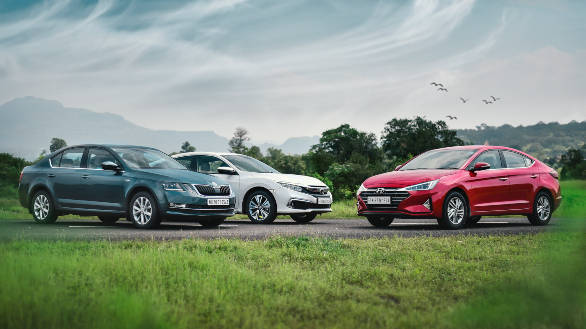 It'd likely be a very particular type of buyer that would choose a sedan over an SUV at this price, and we reckon the looks play an important part here, perhaps even the most important. With the facelift, the Elantra gets the sharper 'cascading grille' that's making its way to newer Hyundais. And as design chief for Hyundai Group, Luc Donckerwolke wants Hyundais to be more sexy and sporty, and this grille and the strong lines on the hood are the first steps on the way to it, with the all-new Sonata (coming to international markets) giving us a good idea what the next-gen of Elantra will look like. 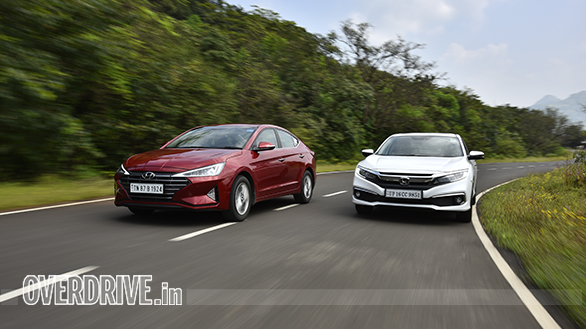 Back to the present though, the Elantra's headlights are unique, with impressive detailing in the individual LED projector beams, while the brake lights do their part to sharpen up the rear, and look great at night. The swooping roofline and stubby boot carry forward and while it does help the Elantra stand out, the Civic does so much better with the same ingredients. In fact, with the exception of the chrome bar grille, there's nothing we would change to the Civic's equally sharp appearance, and that's saying a lot! The combination of the low nose and high tail certainly make it the most stand-out design here, and even someone who doesn't quite like its looks will agree that it the Civic can hold its own with any SUV when it comes to road presence. It's even got the largest wheels here, riding on 17-inchers compared to the 16s on the other two. 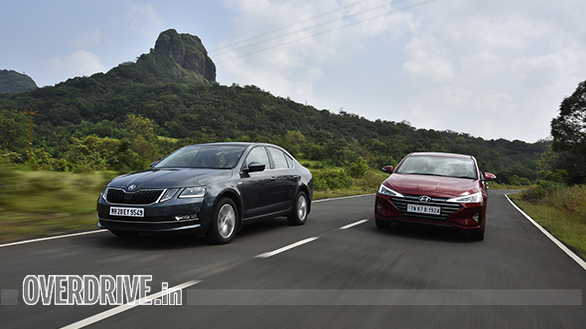 The Octavia looks a little old-fashioned when parked next to the Civic, but at the end of the day, it's a timeless, chiselled design and is probably the only one here that comes close to the kind of elegant aura that can sway buyers from a segment above. There's exquisite detailing in the LED headlights on this L&K variant too and if we had to choose, it'd be between the Civic and Octavia just going by the looks.

If rear seat comfort is your priority, the Civic has the most comfortable rear bench with scalloped seats that you sink into, with a laidback angle of recline. Unfortunately, it's also the trickiest to get into and out of, thanks to its low height. A smidge less space for your feet compared to the others also evens it out. The Octavia's rear bench feels a little high-set but is supportive and kneeroom and foot room is impressive, while the Elantra suffers a little from a lack of underthigh support and a slightly knees-up position, but is otherwise as spacious. With that out of the way, let's get into the specifics of the cabins. 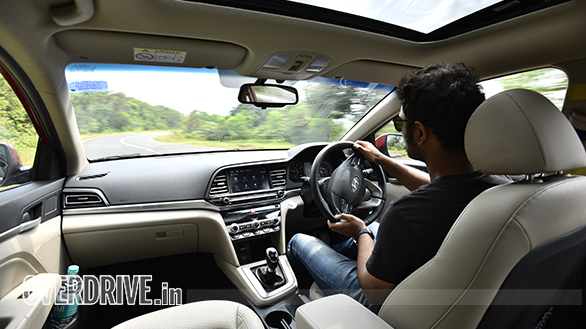 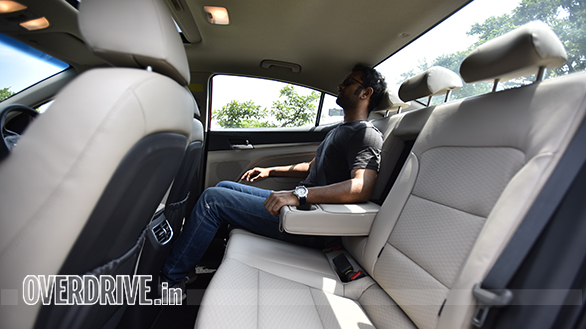 The most noticeable change in the refreshed Elantra would be the new steering wheel, with minor changes to the climate controls otherwise getting lost. The dual-tone cabin feels spacious, even if it's not particularly special-feeling, in its design or materials used. The Elantra also gets Hyundai's Blue Link connected car technology which allows you to run the air-conditioning before you arrive at your car, and along with its ventilated front seats, the Elantra is the best car to ride out a hot summer in comfort. It's also the only car here to offer wireless charging support. 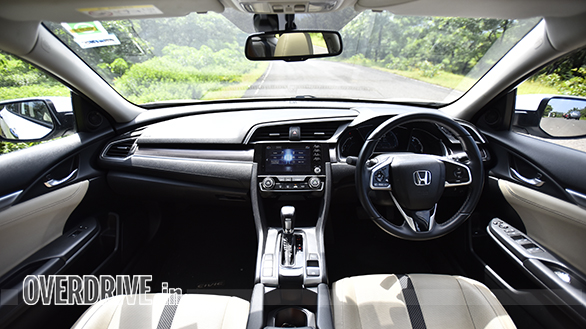 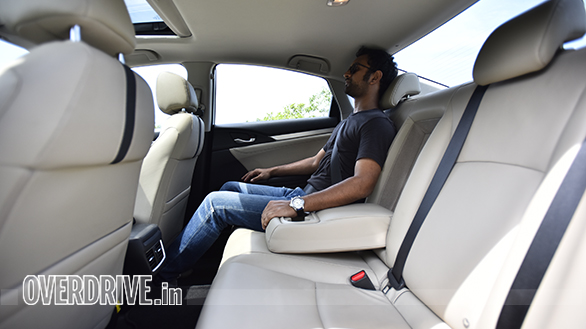 The Civic's cabin doesn't feel as futuristic as the previous generation's did, nor does it feel as special as that car, let alone compared to these two. Like in the Elantra, the quality of plastics (on the doors, the stalks) could make you question its price tag. But, and this is a big one, if you like a low-set, sporty driving position, the Civic's the car for you. Despite that, visibility is great all around, and the Civic is the only car to offer a blind spot monitoring camera, and remote engine start to run the AC. 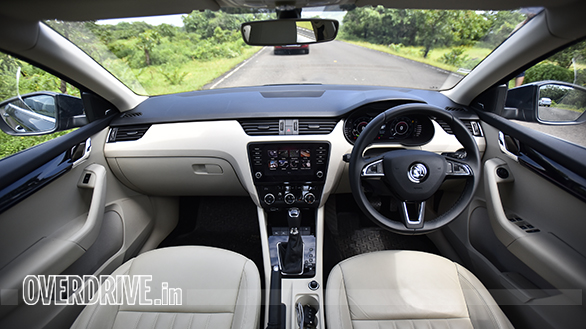 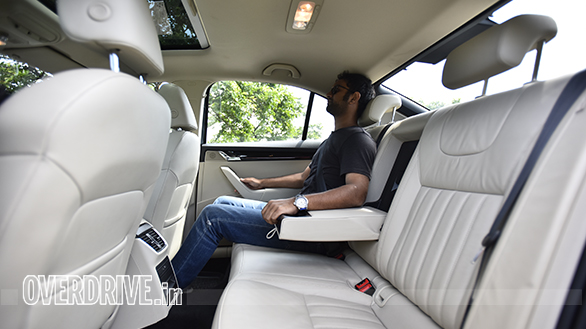 Easily though, the Octavia's cabin feels worth the extra money, with a 9-speaker Canton sound system, soft touch plastics and great detailing, even down to the door handles and stalks. This is an attribute carried over to the lower variants in the range, so even if you pick a more affordable one, you'll get the same great cabin, and doors that shut with a solid thunk, minus a few of the standouts. While the other cars have easy to read, and informative, instrumentation dials, the Octavia L&K with its digital instrumentation panel goes several steps further. The infotainment screen in the Octavia is the slickest to use, with crisp, modern graphics outclassing that in the Elantra, while the Civic's infotainment just feels too basic and outdated. Also, the Octavia is the only car here to offer a panoramic sunroof, likely a huge plus point over the other's regular-sized sunroofs.

With eight airbags on offer in this range-topping L&K, the Octavia scores the highest in safety equipment, compared to the six airbags on offer in the other two. It also adds in TPMS, as does the Elantra, while the Civic loses out on that feature. The Civic does sort of make up ground by being the only car here to offer a blind spot monitoring camera system, but the system has limited use in the real world, owing to its low resolution.

If you think there's no replacement for displacement, wait till you get behind the wheel of the turbocharged 1.8-litre in the Octavia. The only turbo here, it outshines the (only BSVI-compliant) 2-litre in the Elantra, and the familiar 1.8 in the Civic. The Octavia's 180PS/250Nm is miles ahead of the Elantra's 150PS/192Nm and the Civic's 141PS/174Nm, in outright outputs and in refinement. 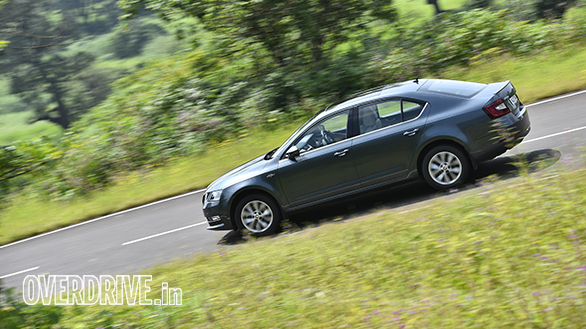 There's also a full range of choice of automatic transmissions with these three, with the Octavia's seven-speed DSG (dual clutch) offering snappy shifts, with intuitive programming keeping revs exactly where you'd want them, whatever the mood you find yourself in. Turbo lag is only evident if driven in manual control (no paddles though) and in a deliberately higher gear, and the motor comes on strong past 2,000rpm, staying healthy all the way till redline, allowing one to use third and fourth up a set of twisties. 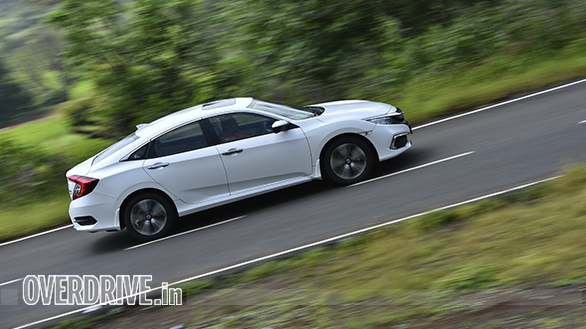 The Elantra's six-speed torque converter is a lot more unhurried in comparison, and works fine for regular driving but obviously doesn't feel as in tune with your right foot as the Octavia does. And while the Elantra's outputs aren't class-leading, it boasts a healthy low end typical of a big(ish) engine, with relaxed, fluid throttle reactions and pace. 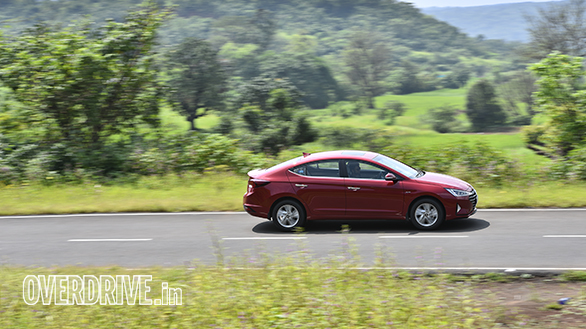 The less said about the Civic's CVT, the better. Again, it's not that it's not a smooth shifting gearbox, or perfectly adequate for leisurely driving. It's that it can be frustrating to have to learn to drive around its shortcomings. Though the Civic isn't exactly a slouch, it isn't an exciting-feeling drivetrain, and the rubberbanding at more than half throttle applications makes you not want to explore the upper reaches the rev range.

The difference in the powertrains is quite evident in our test data. The Octavia's the quickest to 100kmph from standstill, needing 8.6s, while the Elantra takes 9.9s and the Civic comes in last with an 11.2s time. In our roll-on acceleration figures, the Octavia is about half a second quicker than the Elantra, and a second quicker than the Civic. It's also the most efficient, with a healthy 12.5kmpl in the city and 16.7kmpl at a steady 100kmph on the highway. The Elantra is next with 11.3kmpl and 16.1kmpl, the Civic third with 10.7kmpl and 15.9kmpl; city and highway respectively. 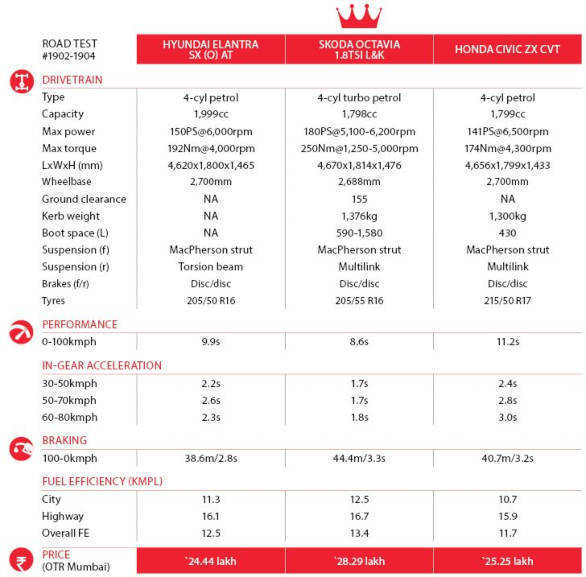 Driving all three back-to-back up our favourite shoot location, with its mix of slow speed corners, flowing turns and, of course, our favourite part, the mid-corner bumps and broken sections of road, shows the amazing abilities of a multilink rear suspension setup to deal with anything you throw at it. The Octavia and Civic, namely, have an edge in the ride and handling department, while the Elantra's torsion beam setup gets caught out by quick direction changes. 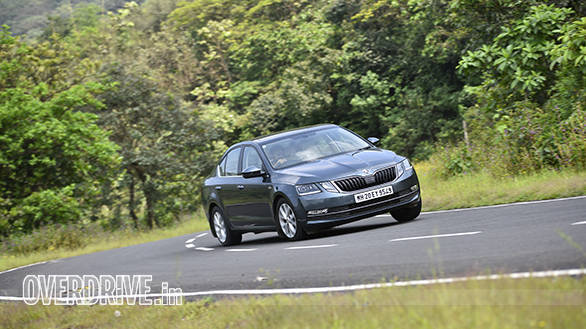 The Elantra is definitely sprung the softest here, and displays the most body roll, with the Civic also pitching into corners but not getting quite so upset by it. The Civic displays a tendency to handle low speed bumps well enough, but is noisy over larger bumps at speed. In contrast, the Octavia feels a little stiff but will only thud over sharper bumps, and because it stays level, feels comfortable all things considered. 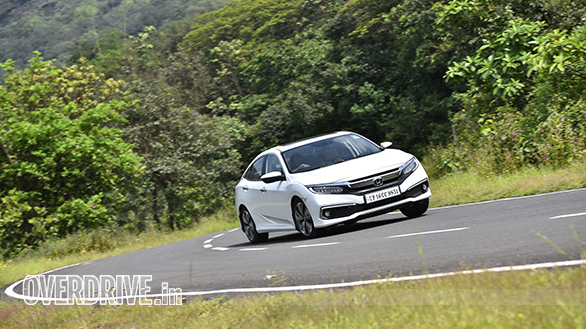 The best driver's car here would be a toss-up between the Octavia and the Civic, purely in terms of feel from the chassis and steering. The Civic feels agile and eager to turn in, with great feel from the steering compared to the Octavia's slightly dead-feeling wheel. Unfortunately for the Civic, the engine and gearbox can't keep up with that enthusiasm and fail to deliver the drive you'd want out of corners, despite the sheer amount of grip the Civic generates. The Elantra can be hustled but doesn't feel happy doing it, displaying more body movements than I'm comfortable with, and overall, the Octavia feels the most naturally inclined to a quick turn of pace. 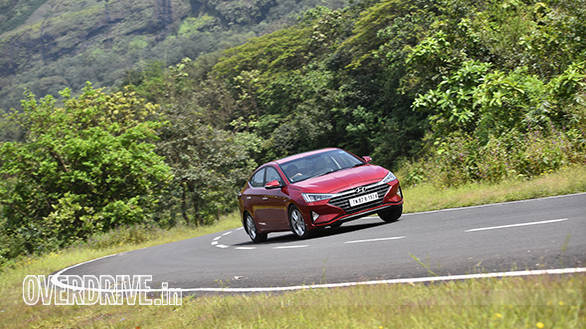 Despite the high asking price for the Octavia, it's the car that comes closest to feeling like you're getting value out of every single rupee you pay for it. Sure, it's a lot more expensive than it used to be, but consider that the other two have also kept up with inflation, real or otherwise. A lesser variant of the Octavia would be closer matched, and you'll probably be as happy. 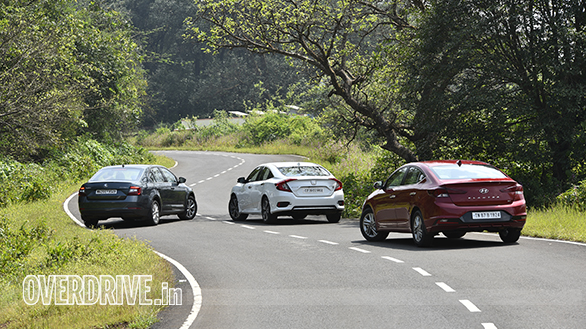 Surprisingly, it's the Civic, with its killer looks that seems to have reignited the segment, something we have trouble seeing the refreshed Elantra doing. Perhaps the Civic captured hearts with its looks, or the cachet of its nametag, but we hope Honda introduces a more modern powertrain at some point. With a new generation of Octavia on the horizon, it's your move, Honda. 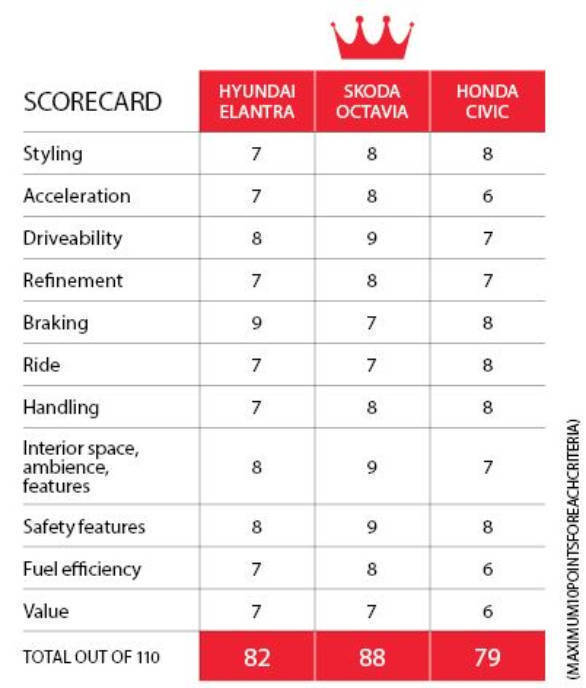