There's always been a dearth of pure driver's cars in India  it is a rare breed of buyer, after all, that prioritises dynamics over do-it-all. And if you thought the pickings were slim in the budget end of the market, throwing money at it doesn't really help. And fast/fun SUVs are still SUVs at the end of the day. Lucky then, the executive "sports" sedan class has seen a revival of sorts, with the BMW 3 Series getting a new generation and a return to sharp driving dynamics, further proving it with the higher-powered 330i's M Sport package. Meanwhile Jaguar's just gone and refreshed the XE to make it a more relevant choice in 2020, adding swank new interiors and an upgraded feature pack. Both these turbocharged petrol sedans should convince you to fire the chauffeur, and get behind the wheel. Which one does it more emphatically? 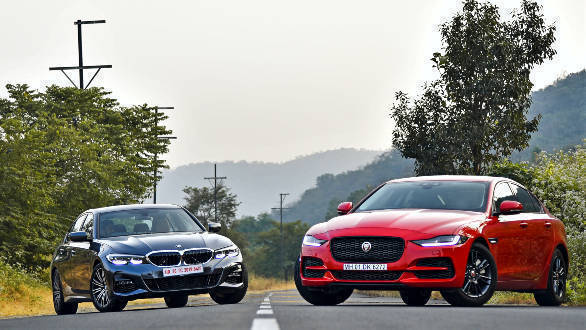 The first time I saw the new XE, parked up on the side of the highway, I thought Jaguar sent us the F-Type by mistake. In this shade of red, it really cuts a fine figure. The slimmer, sharper headlights, wider grille and C-shaped air dams that the refresh brought with it don't seem like much compared to the outgoing car, but damn, view both side-by-side and it looks like the XE's lost serious weight. 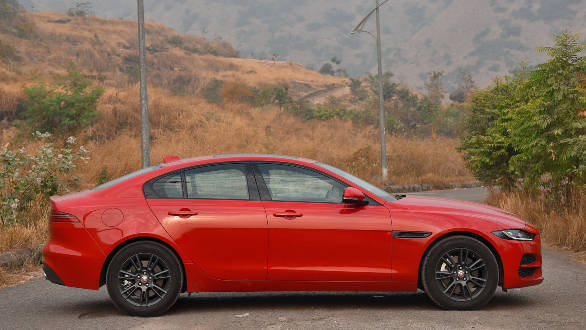 The kinked tail lights freshen the rear, and the twin tailpipe exits are real, and look like they mean business (even though they really don't  we'll explain later). While the international car got new wheel designs, 17-inchers are what you'll get here, though the black trim on this SE variant does a fine job of upping its implied sportiness. 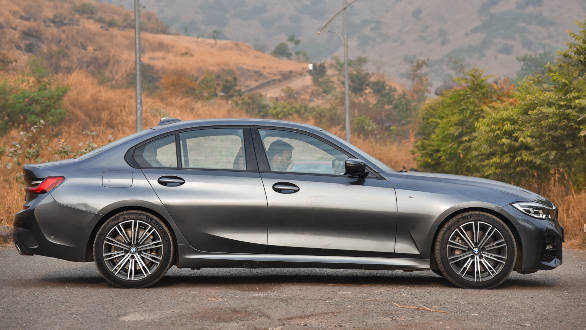 The 3 Series can't compare with the timelessness of the XE, with a far busier design at either end of the car, which I personally have opinions on that vary with the time of day. The BMW also has far more expensive looking 18-inch wheels, that catch light in amazing ways, while the M Sport pack adds its own sprinkling of gloss black trim. But then the long, low lines of the BMW make it look like it was shaped in a wind tunnel, while the Jag looks like it was chipped off from a block of granite. Trust that you'll stand out with either, but for me, it's the BMW (in this spec) that excites more.

Forget everything you thought you knew about Jaguar interiors. The refreshed XE has a cabin you'll immediately fall in love with, with a feature set that'll make sure the love stays. Starting with the steering wheel, which looks and feels like an art installation, the leather-wrapped dashboard that wraps around the front, the inset 10-inch touchscreen running the new Touch Pro interface. 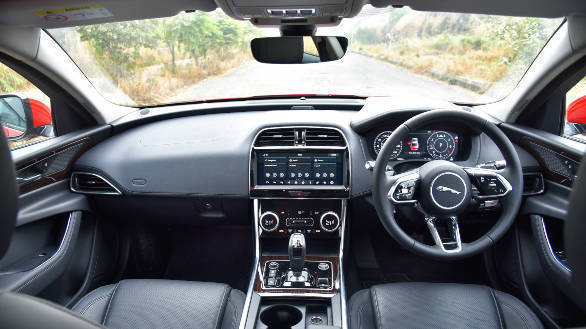 The climate controls have been updated too, though I miss the drama of the rotary gear knob that would rise from the centre stack. In its place is the stick from the F-Type, which can be used to nudge through ratios, though I would much rather use the fine (and supersized) aluminium paddle-shifters behind the wheel. Even the control stalks are detailed with metal finishes. 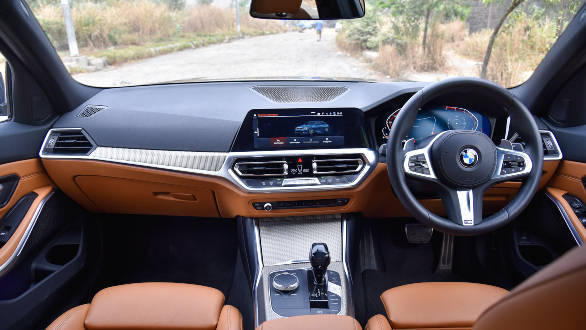 The BMW's cabin feels well put together as well, but not as special. Just like previous BMWs, then. What you get instead of the Jag's wireless charging and Android/Apple integration is gesture controls. Is it worth it? We don't think so. But you also get front seats with far superior under-thigh support, that hold you in place far better when driving enthusiastically. Seat comfort at the rear is a point better as well, with more headroom, legroom and knee room. 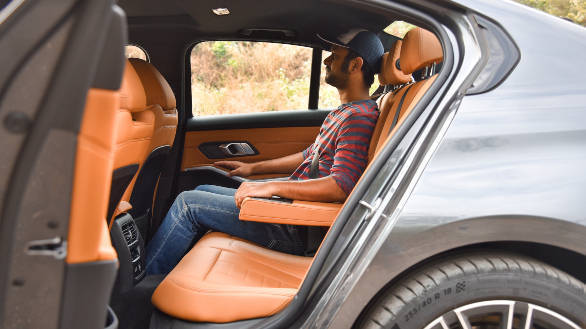 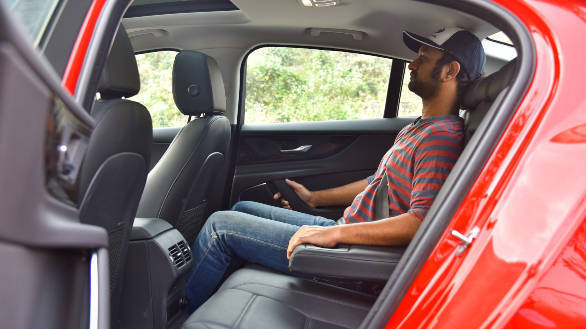 Both cars have high central tunnels, making things uncomfortable for a middle passenger, but at least the BMW's slicker-looking rear AC controls will be better to stare at if someone does get stuck there. The one thing to note, visibility-wise, the thick A-pillar in the Jag could have you moving around a little more to get a better view around a corner, compared to the BMW. The BMW definitely seems better geared to be a driver's car, with a seating position that feels the closest to a sports car we've seen yet in a sedan  low seating, feet stretched out, wheel close to you.

Both cars get a similar list of features in the safety department, with six airbags and only passive safety systems. Well, the Jag does also get a lane keep assist, which tightens up the steering to the point that it's almost unmovable, but we're not sure it's very usable in the real world. The BMW's reverse camera does have slightly better clarity, and both have the ability to park themselves when presented with a clean approach to a spot.

The BMW squeezes out 258PS and 400Nm torque, an extra 8PS of power and 35Nm torque from its two-litre turbo petrol, and importantly, weighs a bunch of kilos (nearly 200kg) less than the XE. You can make up the difference by travelling with three extra passengers in the 3 Series all the time, or enjoy the nearly second quicker acceleration to 100kmph from standstill, with the BMW posting 7.1s to the Jag's 7.9s. 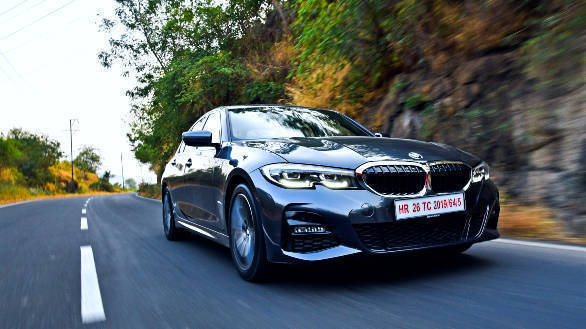 Both these rear-wheel drive cars need traction to be turned off, and manual control of their eight-speed automatics to be taken, since both feel a little pointless above 5,000rpm, and short-shifting does pay off. A crying shame really; the whole point of a petrol is its build towards the redline. And while both engines are creamy smooth, the BMW's feels alert and you can feel the swell as it enters the power, just short of 2,000 revs. 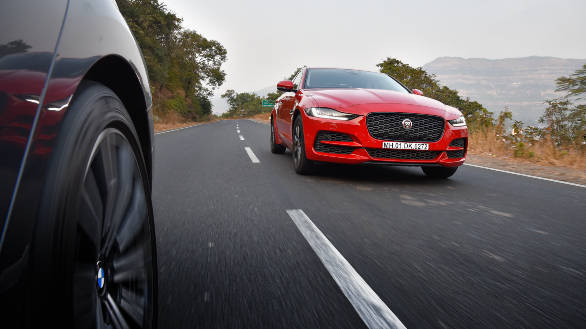 The XE, on the other hand, feels almost like a diesel in its linearity. Not to mention the lack of sound effects to go with it; the BMW, ironically, purrs under throttle and starts to let off soft crackles and pops on the overrev, once it's been warmed up. Both cars shift smoothly and quickly enough, but when you're really going for it, the BMW's transmission feels more responsive and eager. We had a couple of cases where the Jag downshifted mid-corner, under power, which took us by surprise, but we weren't able to replicate it, so make of that what you may. Both have drive modes, but we're told they only affect steering weight and shift points on the XE. As for what works best in either, we'd stick the XE in Comfort, and the 3 Series in Sports Individual, putting the drivetrain back into Comfort. It's just too sharp in Sport, and can have jerky on-off throttle transitions unless you have the finesse of a racecar driver. 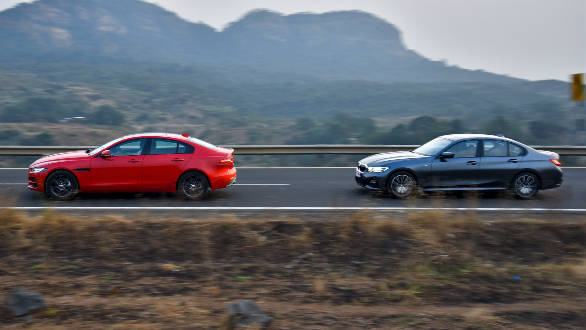 The BMW amazes if you can control your right foot and drive like a regular person, coasting to a nearly unbelievable 20kmpl in our highway testing in Eco Pro mode. The Jaguar is a fair bit behind, posting a near-15kmpl figure. The BMW ekes out another 2kmpl advantage, at 11kmpl. Looking at the way both car's fuel needles dropped when driven hard up our favourite set of twisties, we'd say gunning it will provide a substantially different experience at the fuel pump.

When the XE came out in 2015 (2016 in India), Jaguar engineers made a big deal of its F-Type derived front suspension and multi-link rear set-up. As such, the Jaguar has always been praised for its dynamic abilities, with a precise steering and buckets of feedback. We'd stay away from the Dynamic mode, the steering becomes tiresome and pointlessly heavy, but there's a very reassuring way to how the Jaguar tips into corners and holds its line without even a squeal from its Goodyear F1s. 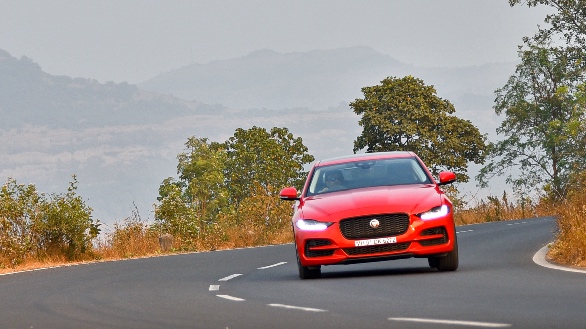 At a pace just about quicker than a cruise, the XE is amazing. Start to push harder, and the chassis starts to feel like it can't keep up. The roll which seemed to help corner entry, starts to feel like it's verging on wanting to make the rear come around, and its breakaway point seems like a razor's edge. And though the XE has the softer brake pedal feel, it stops shorter than the (lighter) 3 Series. 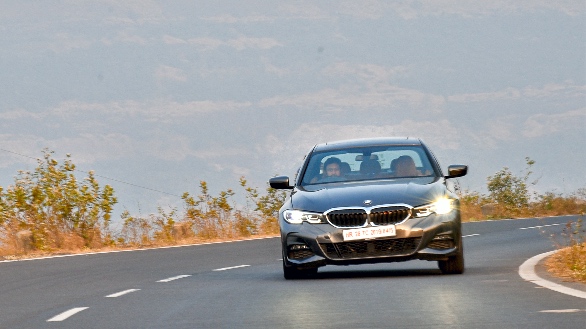 The new 3 Series feels like it's just that  new. With its lighter (more assisted, slightly game-y) steering, lighter kerb weight, and front suspension components largely made of aluminium, there's definitely a difference in agility. Turn in is sharper, bumps and crests can't separate the four-wheels from tarmac, and body roll is far better controlled. At the limit of what we'd push to on these roads, the 3 Series will start to give way with plenty of warning. There is the sensation that you're loading the outer front tyres more, and the Michelin Pilot Sport 4s will start to protest, but it's more of a warning. Despite the low profile tyres, there's a fluidity to the way it rides that amazes me. I'd say it's pretty damn close to the diesel 3 Series' ride, even though that car drives on smaller wheels, with higher profile tyres, just like the XE does. So for the 3 Series to have the edge in bump absorption over the XE is definitely something. Though, it must be said that any tyre under a 50-section sidewall is asking for trouble. But hey, if the trade-off is being more careful over bad roads, consider me warned. 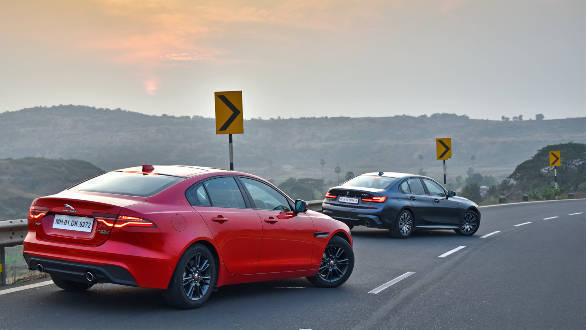 This one's really simple. If you're a quick driver, or consider yourself one, there's a more rewarding experience in the 3 Series from behind the wheel. It's agile, picks up better out of corners and will begin to feel sublime the more you smoothen your inputs. I still don't understand why BMW doesn't offer Android integration, and why the cabin feels so spartan. The Jaguar XE feels so much more modern, at least in the cabin, if that's your priority. And for the driver who's not likely to push as hard, it'll feel plenty sporty. 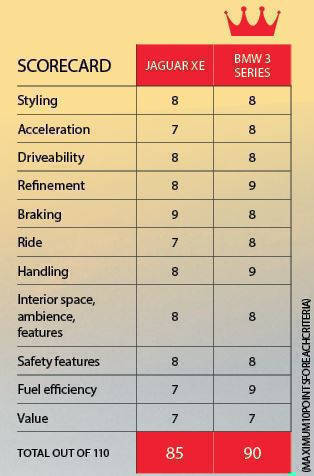