Dark dining, for the uninitiated, is a concept where people eat their food in complete darkness to heighten senses such as smell and taste, making the food all the more enjoyable. Presentation is half the meal, and if you take that away, you have what really matters  the food itself.

If you had to apply the same concept while picking out a comfortable D-segment sedan to be driven around in, you'd have to look no further than the Toyota Camry Hybrid. If you can look past the badge, it's one of the most comfortable luxury sedans in its segment. Some even believe it to be more comfortable than its comparatively expensive German counterparts. Additionally, it's been one of the only few full-fledged hybrid cars you can buy in India at a reasonable price. 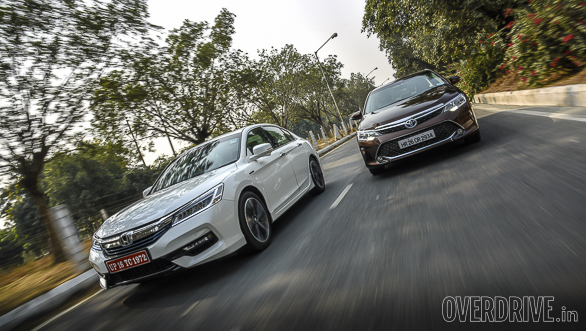 But now, there's a new player in town  the Honda Accord Hybrid. Like the Camry, it's a thoroughbred hybrid, and the previous-generation car was as highly regarded as the Camry in terms of luxury and comfort. But while the Camry stayed put these past few years in India, growing its customer base, Honda was busy freshening up the Accord in every way. But has it done enough to draw attention away from the Camry?

In terms of design, it certainly has. The Honda Accord looks strikingly different, yet familiar to the previous-generation Accord. It retains the general shape of the old car, but has a lot of modern elements that make it stand out. The design is very well thought out, with no loose ends  every line leads into another design element, highlighting it. The bulge on the bonnet, for instance, immaculately leads to the bulge in the grille, which happens to flow into the headlights. The line for the lower crease on the side actually starts right from the front bumper and intersects another line on the rear bumper.

Elements like the striking LED headlights with the blue DRLs, the black and silver wheels, and the blue elements in the tail lights give the Accord Hybrid a futuristic touch. It hints at the direction in which automobiles are going  electric. 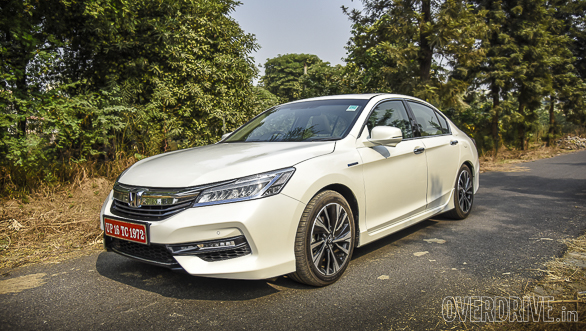 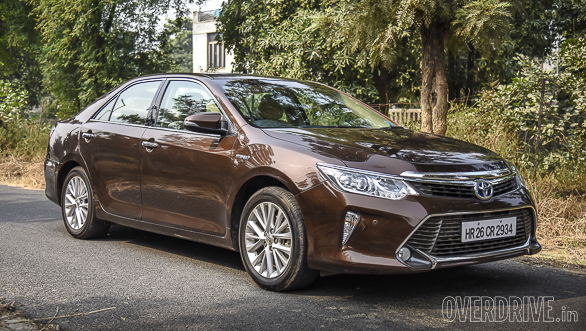 In comparison, the Camry looks dated, despite receiving a facelift just last year. It's not bad, just a bit too incognito. The front end of the car is the most interesting part, with its large air dam, quirky indicators and sharp nose. The rest of the car, in comparison, is quite bland with hardly any character lines. It's the same case with the interior. The dash layout, although ergonomic, is quite dated and the plastics are high quality but not with a simple design. That said, the rest of the cabin, with its beige interior and wood trims, feels plush. 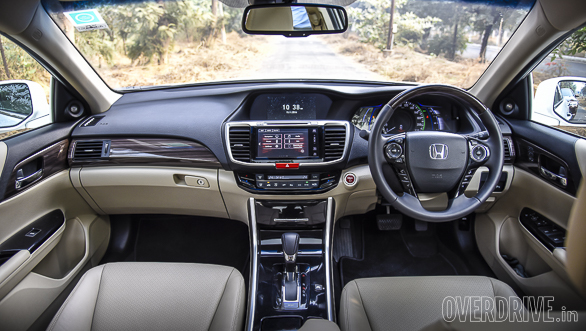 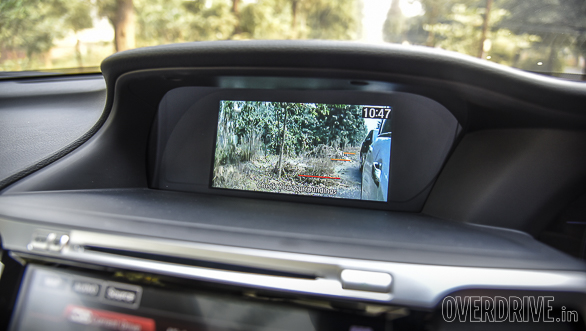 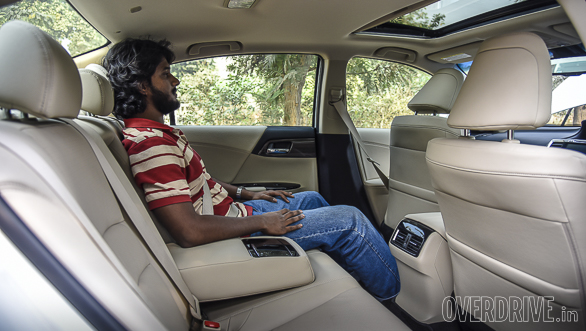 The Accord's interior, on the other hand, looks like a generation ahead. It certainly feels more modern and premium in terms of design with its piano black trim, twin display units and judicial use of wood trim. The part-digital instrument cluster looks very cool with the cleverly designed floating needle. It's not actually floating though  the needle just curves neatly behind the cluster making room for the digital display. The Accord also has a very good active noise cancellation system which results in a quieter cabin than the Camry's. This despite the fact that the Camry's engine is quieter and that it runs low-noise Yokohama dB decibel tyres unlike the Accord's performance-oriented Michelin Pilot Sport 3s. A nifty feature in the Accord is the blind-spot camera located on the left ORVM. As soon as you hit the left indicator switch, the upper display unit, which otherwise shows navigation and other information, connects to the wide-angle camera and shows if any erratic drivers are approaching. It can also be switched on using a button on the headlight stalk. 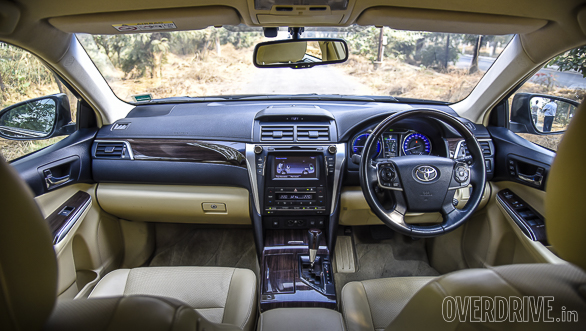 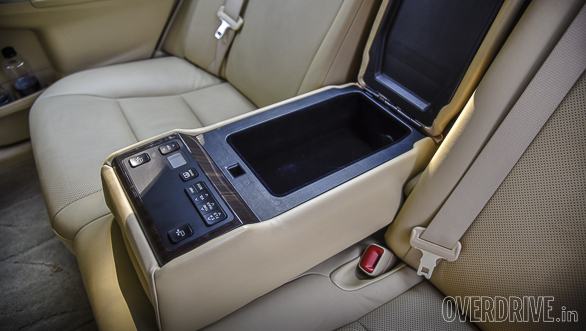 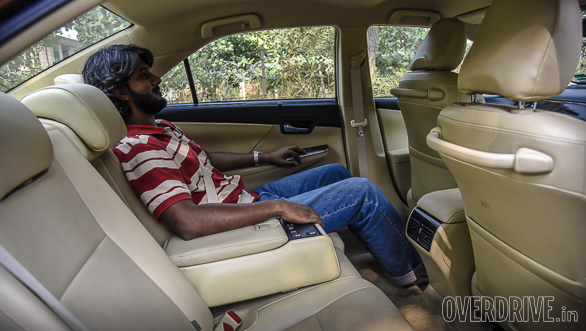 However, what the Camry lacks in design, it makes up for with creature comforts. Unlike the Accord, the Camry Hybrid comes with quite a few luxury features that make travelling in the car a real pleasure  reclining seats (up to eight degrees), three-zone climate control, individual controls for audio and air conditioning on the rear centre armrest, ventilated front seats and electrically adjustable steering. It's also a little more practical with a marginally larger boot. However, it's neck and neck with the Accord in terms of rear leg and kneeroom  both being very generous.

The Accord Hybrid runs a series-parallel hybrid system which uses a newly developed 2.0-litre petrol engine and a 1.3kWh lithium-ion battery. The engine by itself makes 145PS at 6,200rpm and 175Nm at 4,000rpm while the electric motor puts out 184PS from 5,000-6,000rpm and 315Nm from 0-2,000rpm. This gives it a combined peak output of 215PS. In most situations you won't be able to tell which powertrain is driving the wheels. But if you step on it, the engine comes to life and revs all the way to the redline as you wait for the e-CVT's (electronically controlled CVT) rubber band effect to wear off. However, there is a noticeably strong push from the electric motor the first moment you pin the accelerator. The drivetrain's power delivery is deceptively linear though, even in Sport mode! The Accord Hybrid does 0-100kmph in an impressive 8.3 seconds, but it just doesn't feel that quick from behind wheel because of the linear and drama-free performance. Of course, considering that this is a chauffeur-driven car, this is great for the passengers. 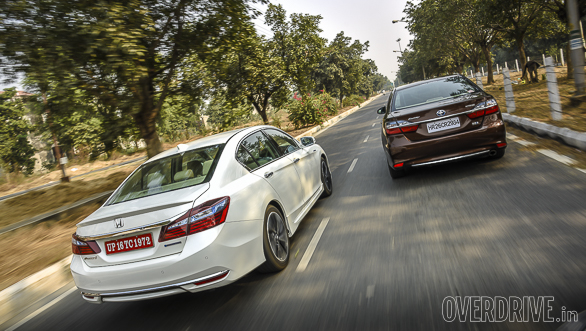 The Camry Hybrid, on the other hand, feels a bit more aggressive under hard acceleration. However, it's a bit slower to 100kmph at 8.5 seconds. The Camry also runs a series-parallel hybrid system which uses a 160PS/233Nm 2.5-litre petrol engine and a 143PS/270Nm electric motor. So while the petrol engine in the Camry is the more powerful of the two, the electric motor isn't, giving it a combined maximum output of 205PS. However, the engine is certainly quieter than the Accord's in all conditions, with the engine note being audible only at mid to high revs. The e-CVT'S rubber band effect isn't as pronounced as in the Accord, and it feels a bit more responsive too.

But having a larger engine does have its downside. The Camry returned an efficiency figure of 21.05kmpl in the city and 31.78kmpl on the highway. While that is massively impressive, the Accord Hybrid managed to outdo it, returning an astounding 27.36kmpl in the city and 35.05kmpl on the highway. The Accord's hybrid system seems to work a lot more efficiently than the Camry's. On the highway, for instance, the Accord would run for as long as it could just on battery power alone, even at 100kmph. Once the charge got low, the engine would come to life and power the wheels through the propulsion motor and simultaneously charge the battery. When the battery was charged again, it would repeat the process. The Camry, however, spent less time in EV mode on the highway, thereby running the engine more frequently.

The Camry certainly has the edge over the Accord in terms of a very important factor in this segment  ride quality. The Camry's suspension set-up absorbs small holes and undulations very well, barely transferring any of the impact into the cabin. Even the larger ruts were absorbed without too much complaint, while the undulations on the highway were hardly a bother even at high speeds.

But that's not to say that the Accord's ride quality is bad. Like in the Camry, the Accord's suspension doesn't thud over potholes or throw you around on broken roads and feels very stable on the highway just like the German saloons. But it does feel a bit firmer than the Camry. But that could also be because the Accord is running slightly lower profile tyres than the Camry. If it ran 17-inch wheels like the Camry, instead of the 18 inchers it comes with, the difference would have been smaller. 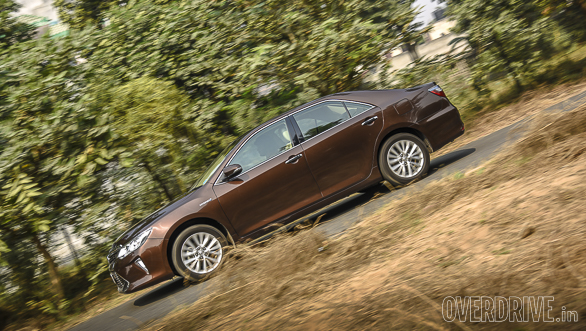 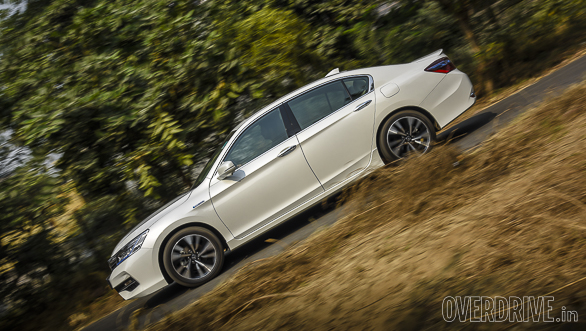 But the firmer ride makes the Accord a better handling car. While we didn't get the chance to thoroughly test its capabilities because of the long straight roads in Greater Noida, the Accord felt better planted during quick direction changes. Additionally, the Accord's steering is a lot more responsive and precise and doesn't feel as artificial the as Camry's. While there isn't a lot of roll in the Camry either, you just don't feel as confident as you do in the Accord. Truth be told, neither are as involving to drive as an equivalently priced European car, but both are significantly more comfortable. 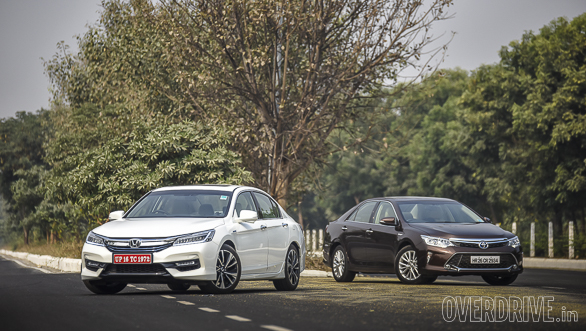 Picking a winner between the two cars here is especially hard because each one beats the other in equally important aspects. For instance, the Honda Accord looks a lot more modern and feels a bit more upmarket while the Camry offers a lot more creature comforts; the Accord is more efficient and better on performance, while the Camry offers better ride quality.
However, the most important factor of all is the price. The Toyota Camry Hybrid will cost you `35.60 lakh, on-road Delhi, while the Accord Hybrid is priced at `42.76 lakh. For the additional `7.16 lakh, you get a car which is a more modern in almost every way. But as a super comfy, chauffeur-driven car, which is what both are primarily meant to be, it doesn't offer the same level of comfort, luxury and value for money as the Camry Hybrid. If appearances are not your first priority, the Camry Hybrid is still the best car for you.