You don't have to be an economic mastermind to know that the Indian motorcycle segment is growing. You just have to have been around a few years ago. Around 10 years ago, performance motorcycles sat somewhere around the 150cc mark - a trend that was kick-started by Hero Honda's CBZ. We've come a long way since then and in that time, the CBZ went away, made a comeback and then went away again. Also in that timeframe was another 150cc motorcycle from the same manufacturer. It was called the Achiever, and now Hero has resurrected that name with a new 150cc motorcycle, the Achiever 150. 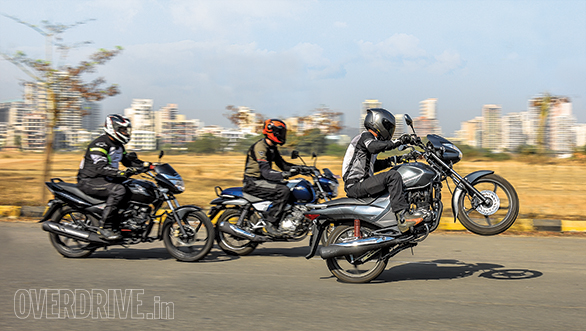 Naturally, a comparison was in order. But unlike the time when the Achiever first came around, the 150cc segment was no longer a mash-up of a few 150s battling. The segment has since divided itself into several sub-segments. Some of them still hold on to their performance DNA like the Extreme Sports, Bajaj Pulsar 150 and the new Honda CB Hornet. Meanwhile, the section of the segment consists of evolved commuter machines that aim at giving the user a great mix of performance, comfort and fuel economy. And it is into this second sub-section that Hero has thrown the Achiever into. A segment in which, we feel, its biggest competition will come from the Honda CB Unicorn and the Bajaj V15.

One of these things is not like the others. You don't have to be a muppet to know what I'm talking about. The V15 is the motorcycle that stands out here. It breaks away from the mould that all the 150s are made in. I used to think that it isn't very aesthetically pleasing, but the more I've seen of it, the more I appreciate the fact that it doesn't look like the others. The Hero and the Honda have a serious disadvantage here. To an untrained eye, one could easily be confused for the other. But the V15? There is just no way anybody can confuse the V15 for anything other than the new V12. 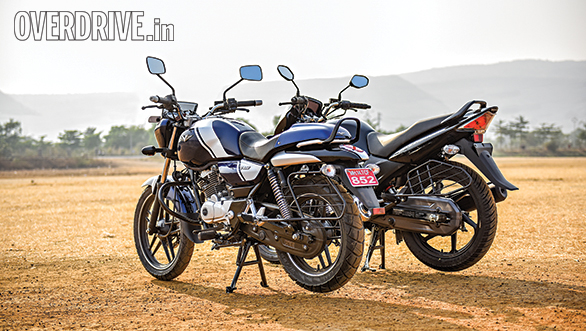 Build quality, ergonomics and features wise all three motorcycles are pretty evenly matched. Quality is top-notch on all three, and they all have the marks of experienced manufacturers making excellent motorcycles. Paint quality is great; all the panels are properly aligned, and there aren't any bits and bobs that fall off. Oh wait. Actually, the Bajaj did have a footpeg that kept losing its rubber. And this is a problem that we have encountered on other test bikes as well. But then it's nothing that a bit of Fevi kwik can't fix.

Features wise, all three are quite basic. The Hero and Honda use an all analogue instrument cluster with a speedo, tacho, odo, fuel gauge and telltale lights (with the Hero getting a side-stand indicator as well). The V15, on the other hand, only gets an analogue speedo and trip meter with a digital fuel gauge and telltale lights. However, the Achiever does have a trump card up its sleeve. It gets the i3s system. Whether or not it translates to more efficiency, it is still new tech and its presence will give the Hero an edge.

There are similarities and differences among all three in terms of chassis spec. The Unicorn and Achiever both use a diamond-type frame and conventional forks up front, but the Hero uses a twin-shock set-up at the rear while the Honda uses the trademark monoshock. The V15, on the other hand, uses a twin shock set-up at the rear and a conventional fork up front while the chassis is a double-cradle frame. All of them use a 240mm disc up front with 130mm drums at the rear. The Honda is the longest of the three with a wheelbase of 1340mm, and at 135.5kg the V15 is the lightest. All three of them run 18-inch front and rear wheels except the V15 which uses a 16-inch wheel at the rear. The sum of all the similarities and differences is that the three motorcycles feel very different to ride. 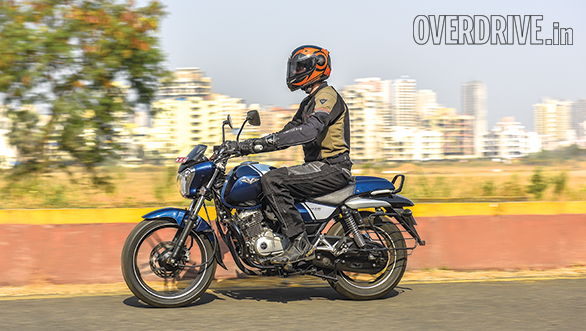 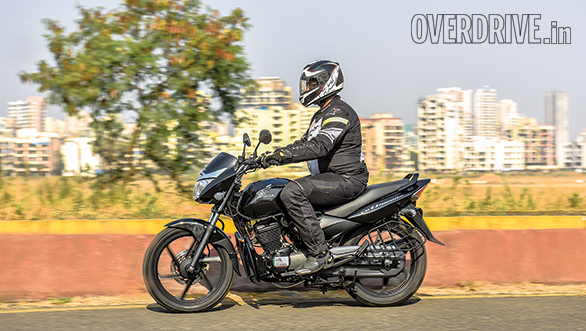 All three use 240mm discs up front, but the bite and feel vary. The different tyres they each use also means braking performance is vastly different among the three

Of the three, I like the Achiever the best when it comes to handling. The turn in is quick but unlike the V15, it never seems over eager. The suspension components give it lots of composure in corners. It feels nice when ridden and cornered hard. The V15, on the other hand, feels super eager to go into corner but lacks the poise of the Achiever. The softer set-up suspension seems to be the culprit here. The Unicorn has the longest wheelbase here, and the combination of this and a spring set-up that is somewhere between the Achiever and the V15 makes it a little bland. It handles reasonably well, and even rides reasonably well. But it doesn't stand out for anything. 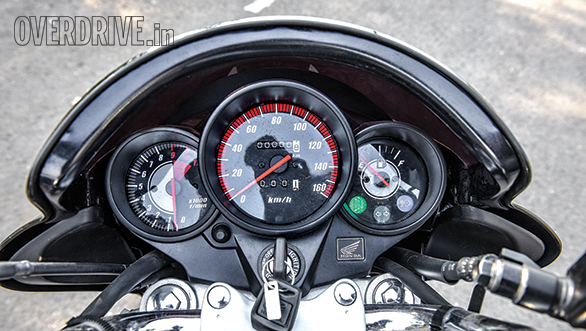 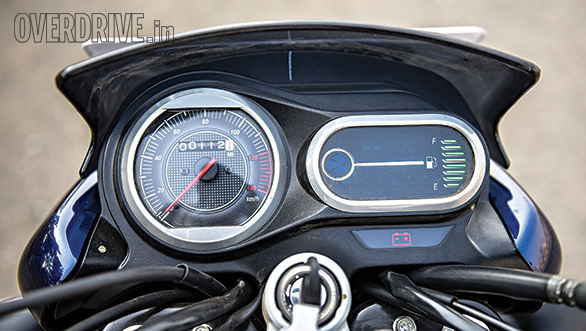 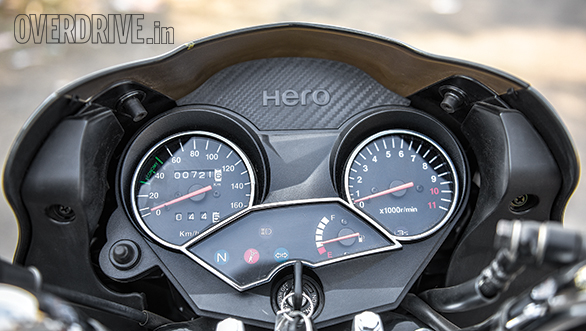 Despite their differences, all three handle reasonably. The ride quality, however, is very different. The Hero feels the most stiffly sprung with the Honda coming a close second. The V15 feels softer in comparison and this helps it over really bad stretches of road. However, when the speeds rise, you realise that the edge in ride quality comes at the cost of high-speed stability. The V15 feels a little unsettled at high speeds, and while this isn't too much of a bother that you really need to complain, the confidence of the other two motorcycles does highlight this. The Unicorn and the Achiever feel at peace even at highway speeds, and this will help if you plan the odd highway trip over your weekend. Having said this, none of these motorcycles is uncomfortable to ride. While the V15 is the clear winner in terms of ride, the Achiever and the Unicorn too soak up bumps and bad roads pretty well. Just not as well as the Bajaj.

All three motorcycles here use a 240mm disc up front with a 130mm drum at the rear. But like their ride qualities, braking performance too is very different. A lot of this comes down to the kind of rubber each of them is running. The Achiever is using Ceat Secura Zooms while the Unicorn uses MRF Nylogrip Zappers (FS up front and Y at the back). The V15 on the other hand uses Ceat Gripp Cruzs. In our braking test, the performance difference among the tyres and the brakes themselves stand out. The V15's brakes have the most feel here. The tyres, though, don't do it any favours, and thanks to that it takes the longest distance (17.39m) to come to a stop here. The other motorcycles lack the brake feel of the V15 but take under 17 metres to come to a stop, with the Achiever taking the least (16.17m).

Like the looks, mechanically too, the Achiever and Unicorn are very similar. In fact, both the engines are essentially the same. 149.1cc, air-cooled singles with a bore and stroke of 57.3mm x 57.8mm. They even have the same compression ratio (9.1:1). But the way these motorcycles deliver their power is very different. The Unicorn has always felt, and still feels  a bit restricted in the way it delivers power. It felt like the motorcycle wasn't breathing very well. The Achiever feels like all those restrictions have been thrown away. And in the process it has found a quarter horse more at 13.4PS (against the Unicorn's 13.14PS). Where the Unicorn takes 5.2 seconds to hit 60kmph, the Achiever takes just under five seconds (4.96s to be exact). And in the 100kmph sprint, the difference increases to just under three seconds. The Hero takes 17.89s while the Honda takes 20.39s. The V15 on the other hand is the slowest in acceleration. The 149.5cc motor makes 13PS and 12Nm. This propels the motorcycle to 60kmph and 100kmph in 5.43s and 24.88s respectively. 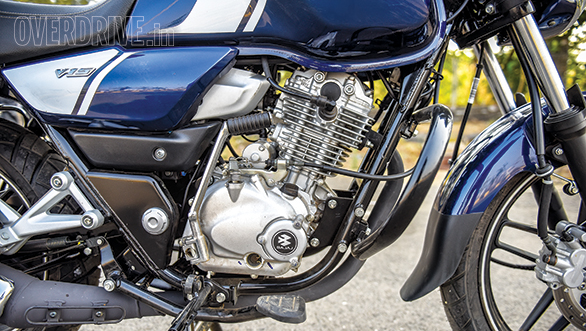 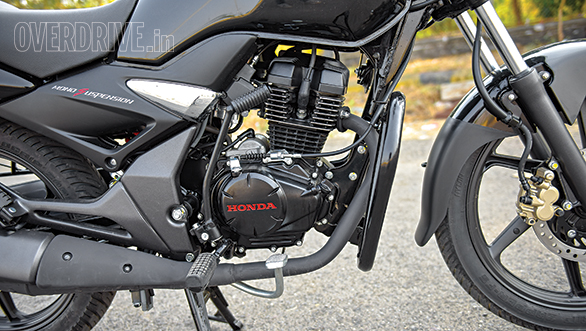 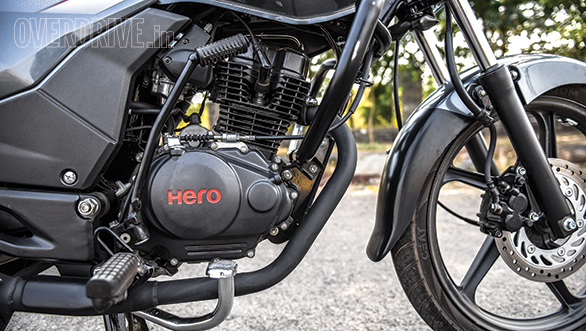 The Hero and Honda engines are essentially the same motor. The difference is that where the Honda feels a bit stifled, the Hero extracts all the performance it can front the 150cc motor. The V15 on the other hands plays the low-end torque game to its advantage

But while outright performance might be against the V15, it does score heavily when it comes to urban usability. At slower speeds in higher gears, the V15 accelerates better. It is perfectly happy puttering around in higher gears in a way that the other two cannot match. Mind you, they aren't bad at this, but the V15 is vastly better. The difference points to a meatier low- and mid-range torque spread in comparison to the Achiever and the Unicorn. But out on the highway, the V15 struggles. Both the others feel comfortable at sustained higher speeds. A steady 80-90kmph doesn't make you feel like the engine is running out of breath with the Honda and Hero.

Even when it comes to efficiency, the V15 loses out. The Unicorn is the clear winner here with a combined efficiency of 59kmpl. The Achiever isn't too far behind with its 57kmpl. But with just 51kmpl overall, the V15 is far behind its competition. Something that holds true when it comes to engine refinement as well. The Achiever feels the most refined of the three here. The engine doesn't feel stressed even at high speeds and there are no vibrations felt. The Honda too is refined but not to the level of the Hero. The V15 on the other hand feels a bit out of its element here. It feels like it's working very hard to deliver that wonderful chug-around-ability.

The reason the Unicorn came back into the market after being discontinued is because there was strong demand for it. And if you are in the market for a Honda Unicorn, you won't even look at either of the other two motorcycles here, you'll just go ahead and buy yourself a Honda CB Unicorn 150. But if you're in the market for a good 150cc commuter, then the Honda feels a bit old and overpriced. It is close to Rs 7,000 more expensive than the Achiever and V15, both of which are within Rs 1,000 of each other. So, if you think about it, the real competition is between the Achiever and the V15.

Both the Achiever and the V15 are excellent motorcycles. The Achiever goes with the traditional, tried-and-tested look of the 150cc motorcycle, whereas the V15 brings some funky good looks to the table. But as a package, the Achiever feels more complete. If your usage is strictly urban, the V15 makes perfect sense. But the moment you decide to hit the highways, it feels completely out of its element. The Achiever, on the other hand, feels good in the city and also holds its own out on the highways. In short, the Achiever does well in both the situations a rider is likely to use this kind of motorcycle in and that holds more value to me here, despite the slightly higher price. 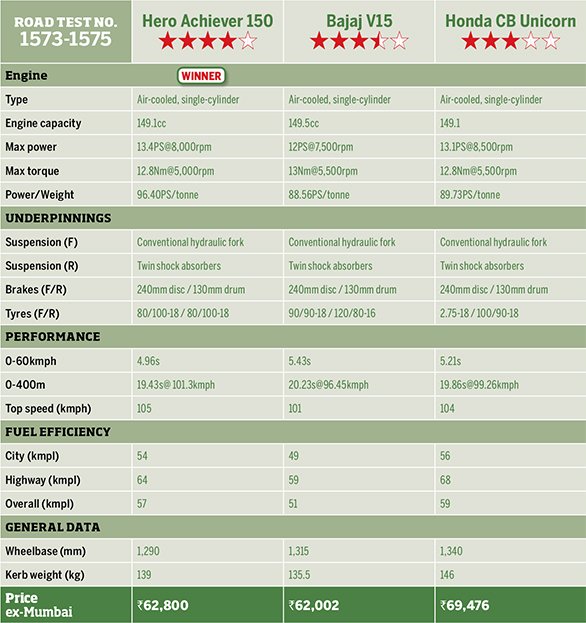