The Crysta is the all-new successor to the Innova after the previous one ruled the market for over a decade. In fact, it was under development for almost five years and benefits from Toyota's new modular platform which gives it a better chassis, opens up new engine options and gives it a bigger cabin. It also subscribes to Toyota's new design philosophy, which gives it a familial look that is in-line with new Corolla or Camry. Be the aggressively sculpted face, or the large imposing grille or the tiny aerodynamic fins around the mirrors and the tail lights (which are said to aid fuel economy and high-speed stability), the Crysta looks every bit a new-generation Toyota. It is also looks quite smart for an MPV, thanks to its SUV-inspired styling cues like the broad shoulders, the flared wheel arches and befitting 17-inch alloys. The Lodgy though has a classic breadbox form fit for an MPV. Save for the quirky taillights, the chunky rub rails, the pointy fins on the front bumper and the subtle character lines originating from the headlamps and tail lights, there is hardly any flair to the design. Customizable kits like the Stepway do add some respite, but it still looks like a typical people carrier. It is still quite handsome for an MPV, but not a premium looker anymore with the Innova Crysta standing by its side.

Step inside the Innova Crysta and you will be in for a surprise. While the earlier Innova was showing its age despite the facelift and most equipment in it looked like an afterthought (which it was), the Crysta's cabin justifies its long development time. From the flow of the dashboard to the integration of equipment and trim elements, everything seems well thought of. Even the choice of colours for the upholstery is thought of carefully - black for the lower trims to avoid getting soiled easily, because they are likely to be used in the cab segment. While a classy brown, which looks premium and needs more care, is reserved for the family-focused top-spec trim. 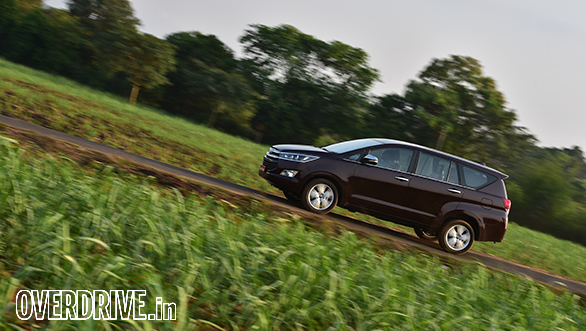 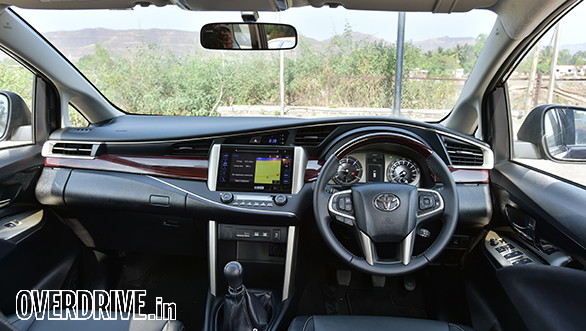 Details like the backlit elements, fonts and feel of the switches are typically ASEAN. Fit and finish is hard to falter Cabin is roomier and seats wider

The Crysta needs you to climb into the cabin, thanks to the taller floor. All the seats are wider now and cushioned firmer for better long-distance comfort. The driver's seat gets electrical adjustments, while the second row gets seat trays and an easy slide function to adjust the front passenger seat from the rear. Access to the third row is now easier too, thanks to a single-step tumble for the second-row seats.

It throws in plenty of new equipment too - automatic temperature control for the first and second rows, a touchscreen infotainment system with video playback and satellite navigation, voice recognition for phone and audio functions, keyless entry and go, cruise control, ambient lighting, auto-down for all four windows and an anti-pinch function. It also has plenty of storage spaces and cooled bottle-holders. The HVAC controls fall easily at hand with their angled panel atop the tunnel console. The UI for the infotainment needs getting used to though and isn't as intuitive to use as the simpler Media-NAV unit in the Lodgy.

Like the Crysta, even the Lodgy comes with seven- and eight-seater options. Its seats aren't as wide nor does the cabin wow you with its design. But long-distance comfort isn't compromised, and ingress and egress is easier on this one, since it is lower. In terms of features, it doesn't come close to the Crysta at all but ticks all the basics you will need on a people carrier and then some. Reclining second-row seats, flight trays, driver seat height adjustment, AC vents and charging sockets for all three rows, parking sensors and camera, touchscreen infotainment, satellite navigation and even cruise control. It doesn't have 20 bottle holders like the Innova Crysta, but the storage spaces in the dash and tunnel console are large enough to swallow quite a bit of knick knacks. Like the Crysta, the touchscreen infotainment system is only available on the top-spec trim. But mind you, its top RxZ variant is priced lower than the Innova Crysta's starting price. 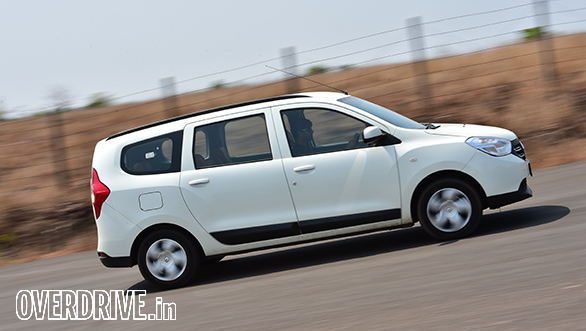 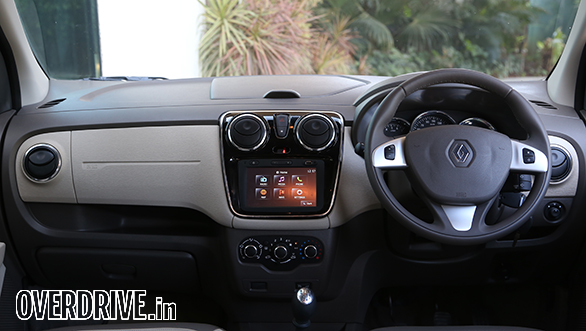 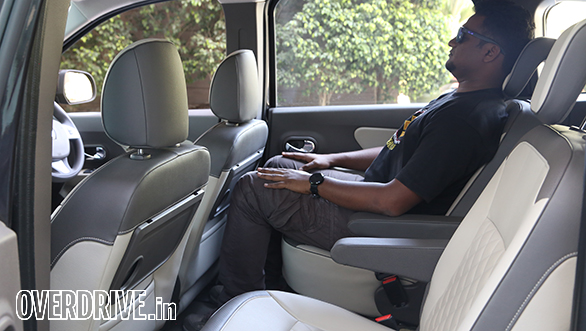 Lodgy's cabin feels quite basic compared to Crysta but room is generous. Third-row space (not shown) on par with Crysta, but the latter is comfier

To justify its price tag, the Innova Crysta packs in quite a bit of safety tech though. The front passenger, driver and driver knee airbags are standard across the range. On the range-topping trims, the Crysta gets up to seven airbags. There are other bits like ISOFIX points for child seats too. More importantly, however, the body structure is designed to comply with or surpass a five-star ASEAN NCAP rating.

The Lodgy on the other hand only manages a three-star Euro NCAP rating due to the heavy deformation that the roof and the A-pillar go through in a frontal or a side impact collision. Furthermore, that rating comes for the Lodgy equipped with curtain airbags. The model sold to us only gets the front airbags. We urge Renault India to upgrade the safety features on the Lodgy to the international spec, at least now that the price wars with the Innova are over.

Toyota believes that the Innova still needs to use a ladder-frame for all the beating it is expected to undergo through its lifetime. The underpinnings come from the proven genes of the Hilux pickup and that makes the Crysta quite a taut car to drive. The car does get unsettled over sharp bumps and potholes and that can be a tad unnerving. But it recovers quickly and hardly sends any jolts to your backside. In fact, its bump absorption is now unmatched by any MPV around it. There is a bit of initial roll when initiating a turn, beyond which the body feels rigid. On a series of switchbacks though, the vehicle does make its long length and ladder-frame construction evident. The 17-inch tyres of the Crysta will cost about Rs 10,000 more for a set change compared to the Lodgy or the previous Innova's 15-inchers, but the grip from the larger tires is expectedly better around corners and under braking. The brakes too feel more predictive and progressive than the Lodgy.

The Lodgy's brakes are progressive when new, but tend to get grabby with age as we found out on our long-term tester. But despite its length, it doesn't lose its composure when coming to a halt all of a sudden. Its lower seating also means that it feels less unnerving in such an event. The lower ride height is courtesy of the monocoque chassis that it is built on. It also makes the Lodgy more car-like to drive than the Crysta. So take your pick accordingly. The Lodgy's body roll is relatively low for an MPV, and the suspension takes on potholes rather well. Our long-termer had even outclassed some of the more expensive SUVs on a trip to the treacherous regions of Ladakh. After all, it is a Duster underneath (and that's the nth time I have said it).

The Innova Crysta presents itself with two diesel drivetrain options - a 150PS/343Nm 2.4l with a 5-speed manual and a 174PS/360Nm 2.8l with a 6-speed automatic. They are a big step forward over the outgoing 2.5l mill, and both the new oil-burners don't feel very different from each in terms of refinement or real-world performance. The 2.8's trump card is the convenience of the automatic transmission. Toyota says that the auto box is tuned for our conditions  -  both in terms of performance and endurance. Time will tell. The manual gearbox has rubbery shifts, but the clutch is light. Both engines have a very meaty mid- and top-end grunt that is well-suited for the kind of chores the MPV is expected to execute. The engines take hardly 2,200rpm to cruise at 100kmph, but their larger displacement and the Innova's heavier body (1,855-1,870kg) mean that they both return a lower fuel economy than the Lodgy. During our tests, both the engines returned an overall economy in the range of 10.3kmpl (manual) and 8.7kmpl (automatic). 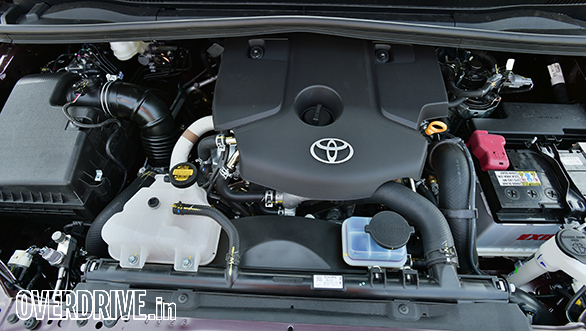 New engines are a big improvement over outgoing mill 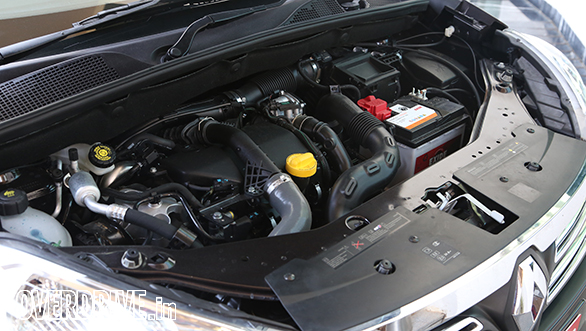 The 1.5l motor is surprisingly potent for an MPV

The Lodgy on the other hand retuned us a consistent 14+kmpl (overall) during our long-term tests. It is an advantage that is largely attributed to its well-tuned smaller engine and the significantly lighter body (~1,368kg). While it doesn't offer two engine options, it does offer two states of tune from the 1.5l dCi motor - an 85PS version that better suited for city use and a 110PS variant (tested here) that is better suited for people-carrying duties and highway touring. It has its little niggles too - like the clutch being quite heavy, or the lack of enough sound insulation to filter out the diesel clatter. But the engine is a potent operator that had trampled the previous Innova on outright performance and fuel economy. The new engines from Toyota are impossible to beat on performance figures, but the 1.5l dCi comes close in terms of drivability and that is how this underdog truly shines.

But unlike the glory stories, this underdog is far from being the people's champion. The sheer brand value, service network and reliability quotient put the Innova Crysta on a higher pedestal. These are the very attributes that also allowed the Innova to claim a higher premium all this while, but now the Crysta also has the kit to justify the price tag. 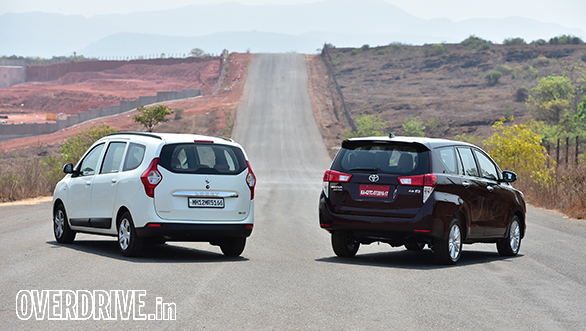 But in doing that, the Innova has moved up a segment, where it has virtually no competition. Not just in terms of price but also as an overall package. That also means that instead making life more difficult for the Lodgy, it actually creates a big void in the Rs 10-15 lakh segment, which the Lodgy can happily fill. What Renault can do of this opportunity though remains to be seen. 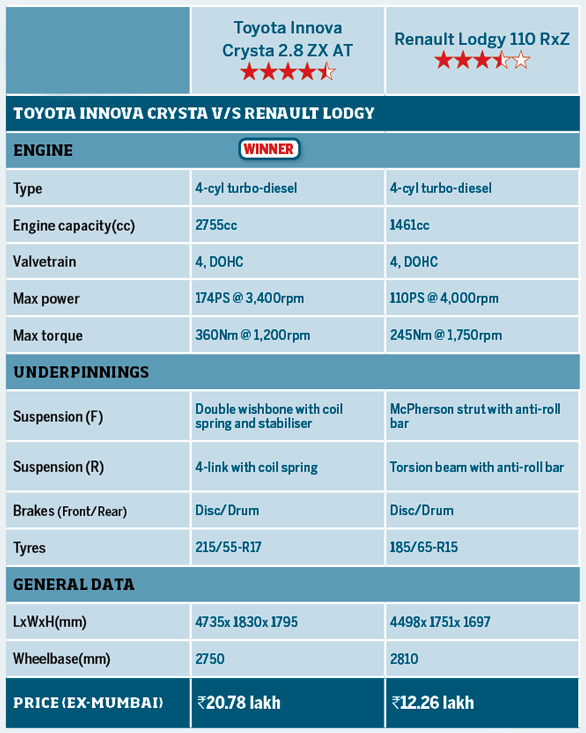