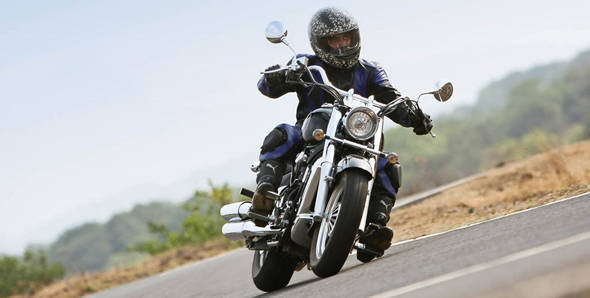 Purists may argue that this is not a thoroughbred cruiser. The original cruisers versus posers duel has raged for decades and now it has reached Indian shores. The Americans have always laid claim to having invented cruisers, quite deservingly, but the Japanese haven't been far behind and at times have beaten the Yanks at their own game. However, the motorcycle in the spotlight here is neither American, nor Japanese but the new kid on the block Korean which makes this motorcycle a very interesting proposition, and will help me understand the Korean take on the whole cruiser building business.
It's been raining imports for the past couple of years and the trend is set to continue. Since 2008 a slew of big motorcycles has entered our market beginning with the Japanese and the Italians and then American cult brand Harley-Davidson with its whole product portfolio.
In spite of all these imports, the Indian enthusiast has no access to affordable motorcycles. Harley-Davidson is the only manufacturer to have gone the CKD route for its 883SL and 883 Iron models and has priced them very attractively of late. The latest entrant, Korea's Hyosung has now joined battle along with Garware Motors and fired its first salvo with its GT650R and ST7. Shumi's taking on the GT650, while my task is to assess the ST7.

Chrome, chrome and more chrome and a bit of colour is what greets me at first sight. The ST7 seems to be inspired by the Harley-Davidson Fat Boy models with their heavy, chrome laden front ends, the wide 120mm front tyre, chunky profile and well proportioned rear. It's Hyosung's take on the classic cruiser (the Hyosung GV650 being more of a modern cruiser) and looks like it has got it spot-on.
The seating position is perfect for Indian of average height but could prove to be a pain in the lower back for six-foot plus users. The footpegs could have been better, like the flat footboards on the Yamaha Enticer. A heel and toe pedal could have also enhanced the comfort levels both on the highway and in the city. The wide handlebar position is a bit uncomfortable in the cut and thrust of city traffic but it's very comfortable on the highway. The tank mounted instrumentation cluster provides all the necessary information - speed, time and includes two trip meters, digital fuel gauge and warning and indicator lights and has a white backlight that looks upmarket.
Hyosung has lavished large amounts of chrome on the engine too which bumps up the ST7's visual appeal. Twin slash cut exhaust pipes look macho but are so close to the rear right footpeg that a pillion rider is prone to step on them. The ST7 certainly plays the role of a classic cruiser very well in terms of visuals and leaves nothing to complain about on the styling front.
However, quality leaves a bit to be desired. The tank on our test bike vibrated excessively which could be due to a loose nut, the horn refused to work at times and the headlight bulb fused on the highway at night, which was a nightmare.

The ST7 is souncomfortably soft that it wallows big time while cornering at high speeds and the light front end doesn't inspire confidence either. The ST7's suspensions, which is a 41mm telescopic suspension up front and oil filled coil spring shock absorbers, bottom out over large bumps at high speeds even when I was riding solo. Sure, soft suspension is quintessentially a cruiser trait but the ST7 could be a bit stiffer without compromising its excellent ride quality. No, spirited riding is not its forte, rather it is a sofa on wheels for low and slow riding.
In a straight line it feels very well composed and that is because of its long wheelbase that is 11mm more than the Fat Boy and the overall length is a full 73.6mm longer than the Fat Boy. If you pitch it against its closest Harley-Davidson rival, price wise, the 883 Super Low, the ST7 is a whole 143mm longer in terms of wheelbase and a phenomenal 281mm longer in terms of overall length. The ST7, being a low motorcycle (seat height being a low 690mm) gives a reassuring feeling of a low centre of gravity which adds to its straight line stability and it also means that it is a good motorcycle to buy even if you are a short ride or a first time rider who might think that the ST7 might be too heavy to handle. It weighs in at 229kg dry and that isn't a lot considering it's a full-blown cruiser.
The braking, handled by the single 300mm disc and the four-piston caliper up front and the 270mm two-piston caliper at the rear, requires significant amount of effort to grind the ST7 to a halt from high speeds. The bite is not that effective and the feel is lacking, especially in the rear brake pedal. It holds its line under intense braking but takes some distance to come to a halt. 100-0kmph takes 4.04 seconds and 52.77 metres while 80-0kmph takes 32.18 metres and 3.22 seconds. Unlike its Japanese counterparts the ST7 doesn't have a brand name stamped on to the brakes. That's because they are local Korean built units and not that I have anything against them but at the price at which the ST7 is entering our market, better brakes would be appreciated.
The ST7 feels incredibly light in spite of its bulk. It has a double cradle frame with two thick downtubes and the radiator which is housed inside a chrome laden housing sits neatly between these downtubes. The wide handlebar enables pretty impressive lean angles and scraping the footpegs in long sweeping corners is child's play. Shinko supplies the rubber on the ST7 and at the front you have a 120/80 16-inch tyre and a beefy 170-80 15-inch tyre at the rear. The tyres perform decently and provide good amounts of grip while cornering but try not to lean too much into corners, just to keep the rubber side down.

The ST7 has a 680cc liquid cooled DOHC 8-valve 90-degree V-twin engine derived from the Suzuki SV650 and has an oversquare configuration, unlike most cruisers' under-square layout. Hyosung's engineers have increased the stroke on the 647cc engine from the GT650R to make it a 678cc enabling the ST7 to belt out its peak torque at a lower rpm than the GT650R. However, the ST7's engine is in a milder state of tune than the GT650R's and the peak torque comes at a rather high (for a cruiser) 6000rpm. However, in the real world the ST7 pulls vigorously the moment you twist the throttle. It also runs a high compression ratio of 11.5:1 which means it will perform better if you use high octane fuel but performance with normal unleaded petrol isn't bad either. The engine does feel responsive and the 62.5PS at 8000rpm is adequate but pushing it is a bit tedious as you feel the engine revving hard and the vibes tend to get the best of you. Also, a high revving engine on a cruiser doesn't make any sense to me. Things are calm enough till 100kmph in fifth gear but past that, the engine vibes and wind blastmakes the going uncomfortable. Gear shifts are smooth and precise and the ratios are well sorted for cruising. The addition of a belt drive adds certain smoothness to the ride but overall it has a bigger impact on making it look like a classic cruiser more than anything else.
But, I managed to get my hands on a CKD (the one we rode was a CBU) version at the Pune showroom after we returned our test motorcycle and for some reason the engine felt more responsive and powerful on the CKD. I'm convinced that the CKD version would yeild better times in terms of performance and we will update it in our forthcoming issues where we will pit the ST7 against its competitors.

The ST7's engine is derived from a high revving street motorcycle and that makes it quick. To elaborate, 0-60kmph comes up in 3.26 seconds and 0-100kmph comes up in 6.62 seconds. While highway cruising and overtaking are a breeze, it also needs fewer downshifts on crowded city riding conditions. I did not notice any lack on the performance front during my stint with the bike. The rear wheel is prone to spin on gravel, tarmac and concrete what with all the torque and power at your disposal. The ST7's ability to lean into corners and its impressive performance should bring smiles to the faces of other riders besides the cruiser fanatics. The exhaust note is a bit subdued and quite out of tune for a true blue cruiser. With two Royal Enfield 350 sized pistons hammering up and down, it has the potential to sound like a proper V-twin, Harley-style. The pipes could be a bit more free-flowing providing a loud, throaty chopper roar instead of a more street bike note that it currently plays.
Fuel efficiency is decent for a motorcycle this size. On the highway it returned 26.3kmpl when ridden at 80-100kmph in top gear and in the city it returned 17.4kmpl which translates into an overall fuel efficiency of 19.64kmpl.

As it is around the world, in India too the ST7 cannot take on the likes of Harley-Davidson head-on. It falls a bit short on quality and the Hyosung brand image hasn't caught the Indian consumer's fancy. In fact, there is no mention of Hyosung on the ST7 at all. Whatever the reason, the ST7 suffers from a mild identity crisis on the streets. It sure has the Harley-Davidson Fat Boy rivalling looks but doesn't sound nor goes or even feels like one. But then it costs less than half of what a Harley-Davidson Fat Boy does. Also, Harley-Davidson's 883 Super Low is priced at a very competitive Rs 5.5 lakh ex-showroom, which is very close to the ST7's Rs 5.4 lakh ex-showroom and that really compounds Hyosung's problem. The 883 Super Low may not have the classic Harley look, but with its more powerful engine and more importantly the Harley brand value, the ST7 is up against a heavyweight and Garware Motors knows that, hence the launch in the tier two cities first. Hyosung's return to India has filled in a very crucial spot in our motorcycle market that was unoccupied for the longest time. However, selling motorcycles is somewhat easy, providing after sales support is not. I'm keeping my fingers crossed for Garware this time and more importantly, for Hyosung.
Harley-Davidson Fat Boy 2020 Full Spec
Price (Ex-Delhi)
Starts Rs 18,25,000
Displacement
1868cc
Transmission
6-Speed
Max Power(ps)
-NA-
Max Torque(Nm)
156.00
Mileage
-NA-
Hyosung ST7 2013 Full Spec
Price (Ex-Delhi)
Starts Rs 5,99,000
Displacement
678cc
Transmission
5-Speed
Max Power(ps)
62.50
Max Torque(Nm)
57.30
Mileage
18.00 Kmpl
Tags: motorcycle  |  hyosung st7  |  cruiser