Three lakh rupees. For roughly that kind of money, there's quite a few interesting motorcycles one can buy in India today. So far, the KTM 390 Duke has been the go-to choice for those looking for a fast street naked, offering an unmatched price-to-performance ratio. But for slightly less money, there's another street naked that has joined the party, the Honda CB300R. It may be down on engine displacement but has a lot of show and go, both. Plus it bears the venerable Honda badge. Can it hold a candle to the mighty KTM though? This is going to be close! 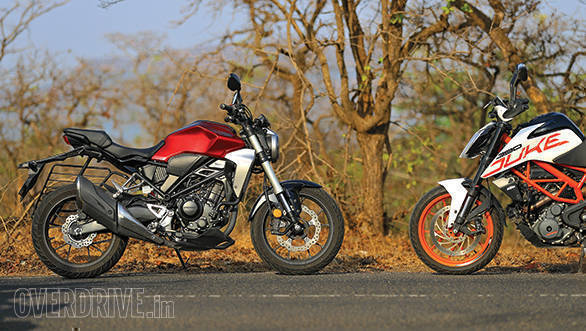 Design and build
The Honda CB300R' s cafe racer design is heavily inspired by its litre-class sibling, the Honda CB1000R. The round LED headlamp and silver finished, 41mm USD forks give the CB300R tons of road presence, despite what its size may suggest. It looks attractive and does so in a manner opposite to the borderline shouty 390 Duke. The latter is all about sharp body panels and exposed elements, such as the orange-hued trellis frame. 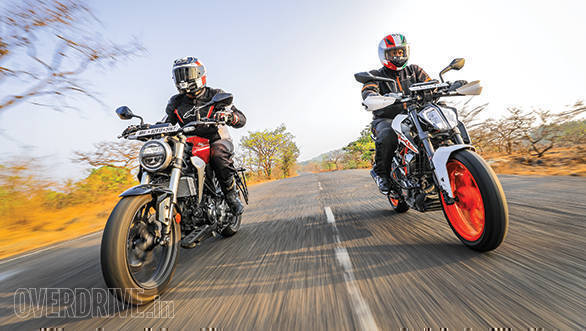 Its design is mean and aggressive, while the Honda is all about clean lines that are sure to appeal to wider audiences. I also feel the Honda looks much better in the flesh than what photos may suggest. Where the CB also gains a point is in the quality and fit-finish departments. The paint job, plastics and switchgear on the Honda are clearly a notch above the KTM.

Engines and performance
Both motorcycles use liquid-cooled, single cylinder engines with 4V, DOHC setups. But as is the case with the design, both engines have different characters. The Honda engine produces a shade over 30PS and 27.4Nm. But the KTM 390 Duke has a clear edge, on paper at least, with its 43.5 PS/37Nm motor. But contrary to what one might expect the difference in real world performance is barely anything, as the Honda CB300R lags behind by about a second only, in the 0-100kmph sprint. While the KTM clocked 5.8s the Honda did it in 6.7s.

That's a surprise, considering the KTM's significantly higher outputs. What helps the Honda is its 147kg kerb weight (lightest in class) which gives it a power-to-weight ratio which isn't too far from the KTM's. 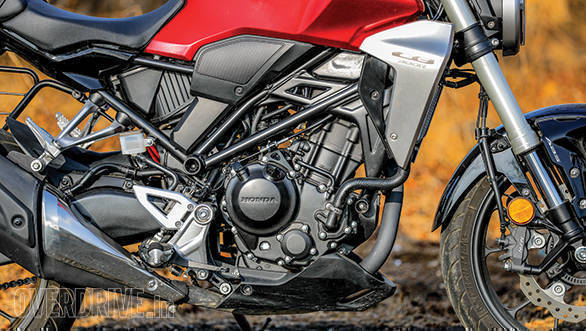 The Honda also feels at home while dealing with traffic. There are no overheating issues and it feels calm and composed unlike the Duke that grumbles at low speeds and protests to be let loose. 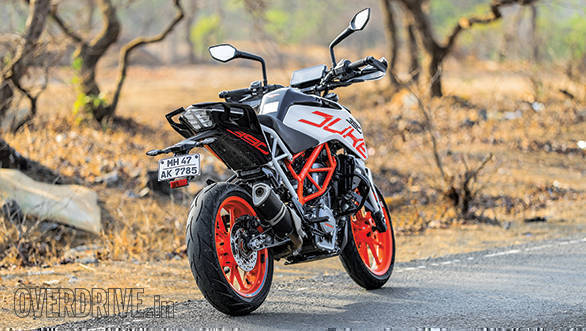 And when you do let it loose, the KTM reveals its enjoyable side. Its engine happily sings its way to the redline, and believe me when I say this, you can never have enough of revving the nuts off the Duke. In typical Honda fashion, the CB300R loves to be revved too and there's a strong surge once you get past the mid range. But purely in terms of engine character, the KTM feels more playful. Where the Honda delights more is at the fuel station, returning significantly better efficiency, if that's one of your considerations.

Ride and handling
The Honda CB300R's 41mm Showa USDs and adjustable rear monoshock are set up to offer just the right balance between ride and handling. At slow speeds, over bumps and potholes, the ride is a tad firm but not uncomfortable. On the flipside, this firmness results in a planted feel while attacking corners. The CB is surprisingly easy and nimble through twisties and even beginners will find its friendly nature confidence inspiring. 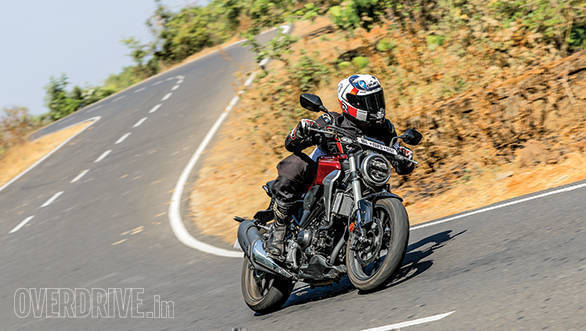 The only issue I have is with the Michelin Pilot Street tyres. They aren't lacking in grip, but fail to deliver feedback when you turn up the wick. It's as if the chassis and suspension are ready but the tyres just aren't up for some fun. Unlike the 390 Duke's Metzelers. Or, you could replace the Michelins with a set of Apollo Alpha H1s as they would work wonders in enhancing the ride experience. And that's where the KTM truly comes into its own. It was and is still a terrific motorcycle for corner carving. The grip from the sticky Metzelers coupled with the feedback from the chassis and 43mm WP USDs allow the rider to carry higher corner speeds and lean more. All this, while offering good ride quality too! 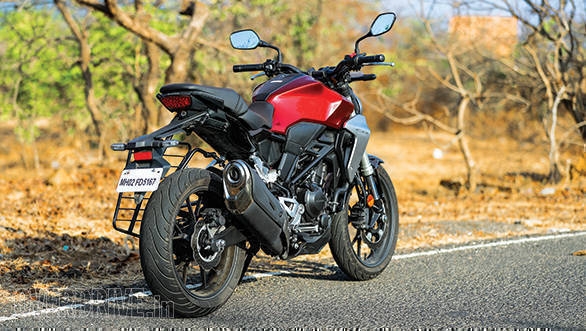 This comparison might have formed a forgone conclusion in the minds of many after reading the title. Yes, the KTM 390 Duke wins this test, but the margin by which it does is a lot narrower than what you'd expect. The Honda CB300R is genuinely impressive. It's quick, well built, looks good and has a sweet ride and handling set-up. It's also easier to live with in the city and if you are going to confine your riding to the concrete jungle, the CB300R is fantastic. It's surprisingly easy to flick your way through traffic and my bet is a lot of newbies or those returning to motorcycles will take to the CB like fish to water. But if you love the thrill that riding offers, with a dash of mischief, the 390 Duke fits the bill. Between the two, it'll be the one that'll leave you with a wider grin inside your helmet. 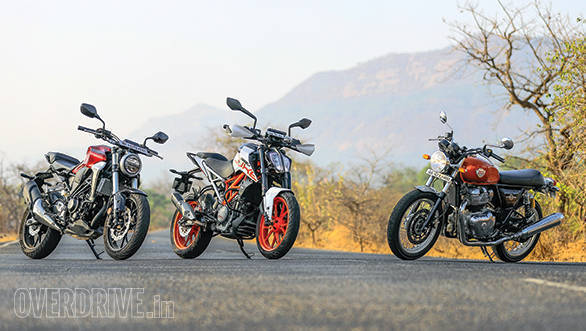 I know it's not a direct comparison, but the Royal Enfield Interceptor 650 simply cannot be ignored here. For a few thousands of rupees over the CB300R and 390 Duke, the Interceptor brings quite a lot to the table. The parallel-twin engine is a gem, the styling turns heads and then there's the Interceptor's charm that nothing in the vicinity possesses. Sure it can't match the suspension, quality and handling of the KTM and Honda, and yes, ride ergonomics are flawed but nothing beats the Interceptor for its sheer value. And that makes it worth a look.