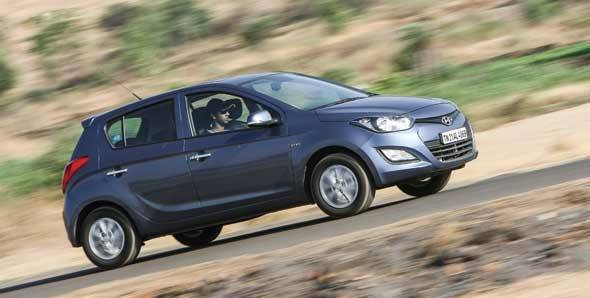 Here's the thing with updates in the automotive world. If the update involves only visual details, sooner or later people will figure out that there is not enough meat in the upgrade and the numbers will drop. If it involves only mechanical changes, people won't see anything different in the first place and the numbers will suffer. The key lies in getting the perfect balance of the visual and technological upgrades that will make automobile a more interesting option from among the competition. There are two things that make the new Hyundai i20 interesting to us. The first is purely cosmetic and the second is purely mechanical. The cosmetic part of course does not intrigue us as much as the mechanical though. So forgive me if I do not dwell too deeply on the former.

The new i20 has just done under Hyundai's 'fluidic' knife and has come out looking distinctly European. The front end looks a bit Scirocco-esque and features a glossy piano black front grille and new clear lens headlamps and fog lamps. The sides remain pretty much unchanged except for the rear view mirror mounted turn indicators. The rear gets a redesigned bumper and all new tail lights. The car also gets all new alloy wheels. Inside there is a new centre console and air con vents that look like the ones from the new Sonata. The dashboard layout remains unchanged but loses the airbag indicator it previously had. The clocks are better looking with the now standard blue lighting making an appearance again.  The multi function display includes a gearshift indicator but does not show range. The new cars gets Bluetooth connectivity, an armrest on the driver's side, reverse parking camera, parking sensors, automatic wipers and automatic headlights as well.

The most significant change in the new i20 is under the hood. When the car was first introduced it had a 1.2 litre Kappa series engine which made 80PS and 112Nm. The engine was the quickest 1.2 we have tested with a 0-100kmph time of 13.36 seconds. The same engine when it was used in the later i10s featured variable valve timing but only on the intake side. But this system (or VTVT as Hyundai calls it) did not make it to the i20. Now, the new i20 gets VTVT but not just on the intake, but also on the exhaust side.

It all sounds nice but what does it actually do? The internal combustion engine functions by igniting a mixture of fuel and air in the engine cylinder which drives the piston up and down. Now there are two things that are fundamental to this process. One - the fuel air mixture needs to be introduced into the cylinder. Two - the residual gases after combustion need to be expelled. These two actions are completed by a set of valves on the cylinder head, namely the intake and exhaust valves. These valves are controlled by a camshaft, whose profile controls for how long and how the valves open. Now, the basic characteristic of an engine (power output, fuel efficiency, emissions, etc) is a factor of the amount of time each of these valves remains open. If there is no overlap in the opening of the intake and exhaust valves, the engine will have a smoother idle but the top end performance will suffer. In the case of engines that do not have variable valve timing, the engine can either be super efficient or super powerful. Addition of variable valve timing gives the car the ability to vary the valve to either overlap or not overlap enabling the engine to produce high power in high load conditions and run more efficiently when stresses are minimal. Hyundai's VTVT, Hondas VTEC, Toyota's VVTi are all examples of this.

The absence of variable valve timing on the older i20 meant that the car had a single characteristic being very quick. The new engine produces 84PS at 6000rpm (4PS more) and 114Nm at 4000rpm (2Nm more). On paper this looks very good but the moment you drive it, the lack of power is evident. The car is sluggish and refuses to hurry even when revved all the way to the redline. As a result the car takes 15.6 seconds to get to 100kmph from a standstill, a whole 2.2 seconds slower than the previous i20. Coaxing any urgency out of the car, especially for overtaking requires two downshifts and if you're on an uphill there's no point even trying. Top speed is not that brilliant with the car maxing out at 159kmph (the old one did 164kmph). But the lack of performance is not a black mark on this car's resume when you look at the kind of economy it puts out. It gives 14.2kmpl in the city and 20.2kmpl on the highway resulting in an average of 15.7kmpl.

The suspension setup in the i20 is all too familiar. It has the same badly damped suspension like theVerna with the car all but bottoming out if you have the misfortune of hitting a bump at anything over 40kmph. Increasing the compression damping would have most likely have ironed this out, but whatever be the reason, Hyundai has opted not to. At highway speeds undulations on the road makes the car feel very unsettled and speeds above 125kmph is not very confidence inspiring, especially with that light steering. Another problem with the suspension is the bouncy ride. That and the generous amounts of body roll do not do much for the ride quality.

The i20 is great value for money package. It combines both a new visual package and technological innovation. According to the formula I suggested, it should be a sure success. But then, we at OVERDRIVE are not the aam aadmi. We like our cars to be quick, fast and handle like they're on rails. It is here that we have a problem with the i20. It does neither of the above. But where it does win is in offering a very attractive looking vehicle that will seat the passengers in comfort while they rush to work and back with an occasional weekend outing included. All this while not making even a small dent in their bank accounts. But whether the kid from Korea will fight back the stiff Japanese and European competition is question that will have to be answered another day in these very pages.