You know when you get invited to Finland to drive the new Taycan 4S, it is going to be an interesting experience. The cold is expected, what Porsche failed to mention is the just about two hours of daylight. Even those two hours aren't a sun shining in your face kind of day. There is a dull, cold, diffused light spread through the landscape. It comes in late in the day and goes out in a blink. Yet it provides enough of a window to drape the Taycan 4S in a gorgeous canvas. 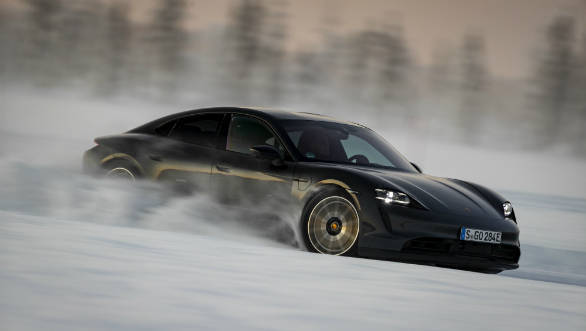 Porsche's all-new and first of its kind electric sports car was revealed earlier this year to much fanfare. The burning issue that the Taycan addresses is that it is not so much about being an EV as much as it is about being yet another Porsche. In that sense you approach this car like a damn fine sports car, that is as much Porsche as any other Porsche before it. The electric powertrain becomes secondary. 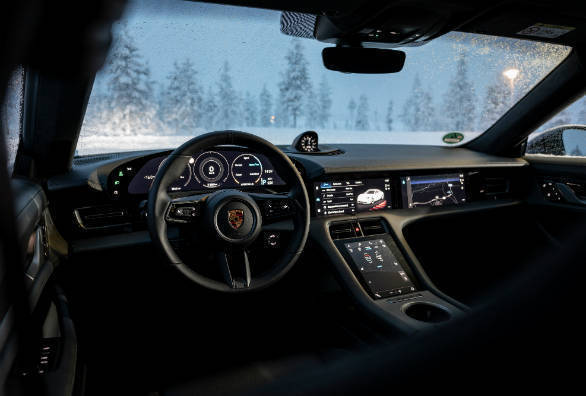 The Taycan 4S looks the part too, losing none of the details that are part of the Porsche gene pool. It is low-slung, is as slinky and curvy as Karlie Kloss stretched out on a settee, and it's got the interiors that scream Porsche in every fold, tuck, and stitch! It smoothly blends traditions with futurism. The interiors, for instance, are classic Porsche, the absolutely delightful round steering wheel sans paddle shifters, the vision of those raised fenders from the windscreen, and the Chrono on the dashboard. On the outside, the flap to access the charging point that slides up effortlessly when you touch the underside of the wedge just next to it or moving towards the rear of the Taycan 4S, that single thin LED strip running seamlessly from end to end are all as exciting as the future this car represents! 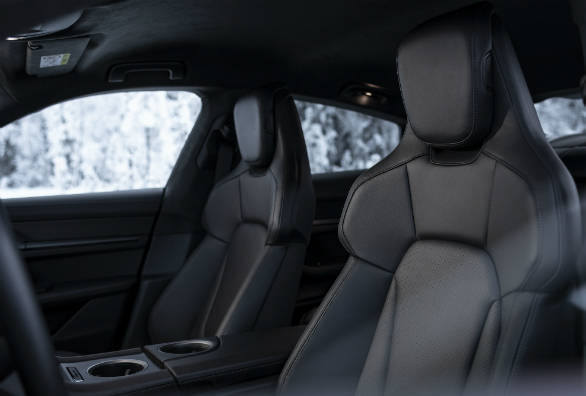 The Taycan 4S seats four, but access to the rear seats and the space available in there is a bit of a squeeze. While the rear roofline looks tallish, bear in mind that the Taycan stands no taller than four and a half feet. However, it has a wide track, 1,702mm at the front and 1,666mm at the rear. That ensures you don't just get a rock-steady footprint, you also get enormous shoulder room.
The 4S forms the start of the Taycan line-up, split into two variants distinguished by its battery size. At the base is the 79.2kWh, 435PS max power generating Performance Battery. Dialling that up to 490PS is the 93.4kWh Performance Battery Plus version that is also used by the Turbo and the Turbo S variants. With overboost, that power output gets bumped up to 530PS and 570PS respectively. Both variants are capable of hitting a 100kmph in 4.0 seconds, once power is delivered to two brushless electric motors, one for each axle. This gives it, its four-wheel drivetrain. Both variants hit the 100kmph mark in the same time, because the weight of the batteries is lesser in the base variant, raising its power to weight ratio, giving it comparable acceleration over short bursts. However, the difference lies in the sprint to 200kmph, where the Performance Battery Plus variant hits that mark in 12.9 secs, 0.4 seconds quicker than the base car. 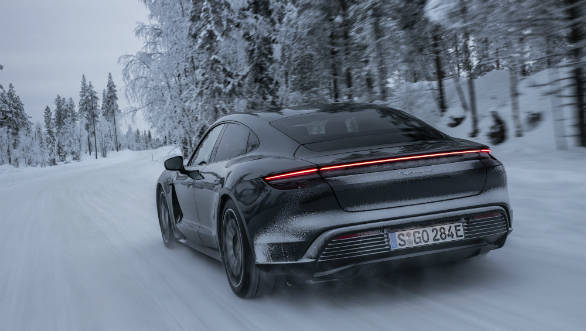 Porsche also innovated a unique gearbox for the Taycan that uses a two-step transmission. The first ratio is utilised for standing starts or during launch control. The second ratio is extremely tall, giving it a wide range between efficiency and power when required. Shifts are seamless, you just don't feel the shift from first to second. What is even more impressive is that regeneration, when you step off the throttle, is superbly fluid. You simply don't feel the negative G when you step off the throttle. 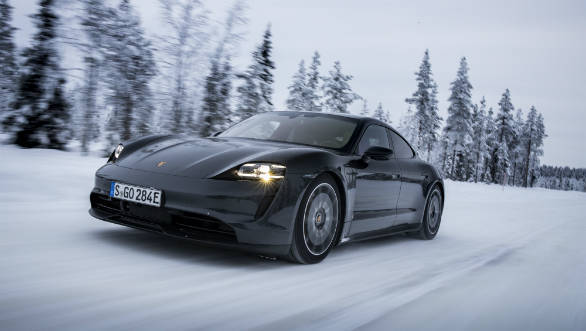 The 4S is a four-wheel drive sports sedan, but above all it's a Porsche. That means dynamics complementary to the other cars in the brand stables. To this end, the Taycan has a centrally controlled chassis system that controls all the chassis systems in real time. Adaptive air dampers using three-chamber technology with electronic damper control is standard fitment. 6-piston calipers at the front and 4-pot units at the rear clamp down on 360mm front discs and 358mm rear discs respectively. Braking also induces regenerative braking, maximum braking effort can generate up to 0.39G with recuperation of up to 265kWh. 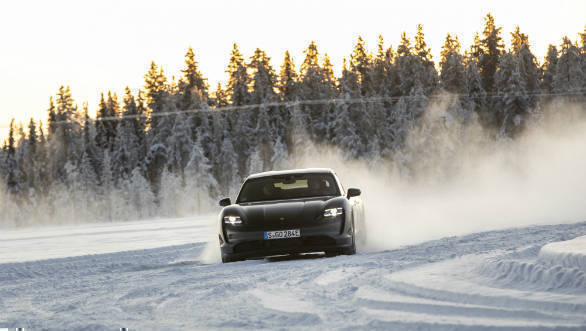 Driving the Taycan 4S on ice isn't an easy job. The base variant dishes out 640Nm of torque in an instant. On an icy surface like a massive lake bed that's frozen over, it is sheer joy. On icy windswept roads, you can have a moment. The safety nets fall into place instantly but not before you've stripped your pants. Still, the Taycan 4S feels precise, well-measured and intense. It's a heavy car, even the base variant is significantly heavier than an equivalent Panamera, thanks to those batteries. So if you thought taking out the prop shaft benefitted the massive engine and transmission, it's all negated by the weight of those batteries. Still, that massive battery stack sitting on the floorplan does give the Taycan a very low centre of gravity. So when you shift direction, the Taycan does it precisely and predictably. On ice that precision is highly appreciated, what did bother me however was the lack of noise and a tachometer, which for someone who is a bit amateurish in their efforts to drift on ice, an essential indicator of how much harder the throttle pedal needs to be depressed, would certainly help. In time, however, this is also one of many things you get over and start relying on that incredible chassis to give you a feel of what is happening at the tyres and what you need to do next. 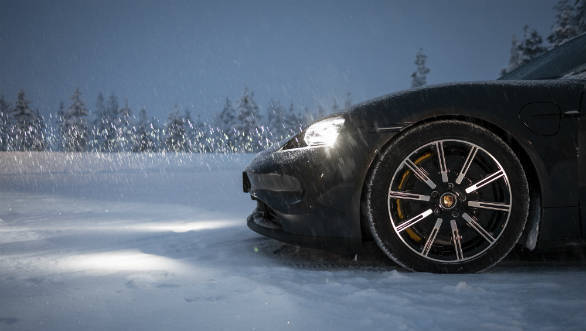 There is an immense amount of electronics at play in the Taycan 4S. From the steering and braking systems, the thermal management for the battery and the electric motors, the suspension and the chassis, the on-board entertainment and air-conditioning, it's all sapping power from either the main battery or the auxiliary battery. Which brings the battery management system into play (see box). Given the conditions we were driving in, the battery did see a significantly higher consumption than if it had to be driven in a warmer environment. So by the time we had completed an on-road driving circuit that was around 200km long and arrived at the drift circuit, the battery had lost more than half its state of charge. Charging takes around 22.5 minutes to get it from five per cent to an 80 per cent state of charge with a fast-charging station. The base variant, Porsche claims has a range between 333407km, whereas the larger Performance Battery Plus variant raises that to between 386463km. 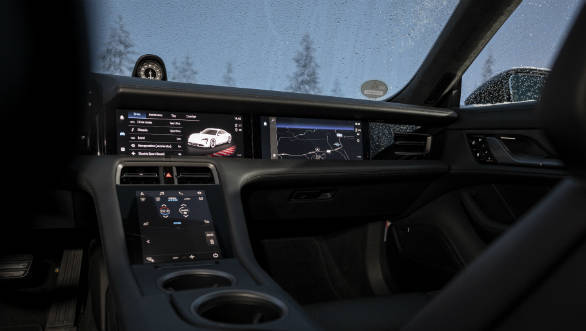 It would be very easy to ask Porsche to simply negate all the on-board electronics and to have made a more mechanical car. But that wouldn't allow the engineering teams to, wellengineer such a clever car. It's got some absolutely amazing bits. For instance the direction of the airflow from the air-con vents can only be programmed from the touchscreen, no controls on the vents. Or how a camera at the front end is used to alter the car's regenerative braking, or how it has got three infotainment screens that not just throw up tons of information and accessibility features, but how that passenger-side screen can detect when a passenger is actually in that seat! It is smart and more! 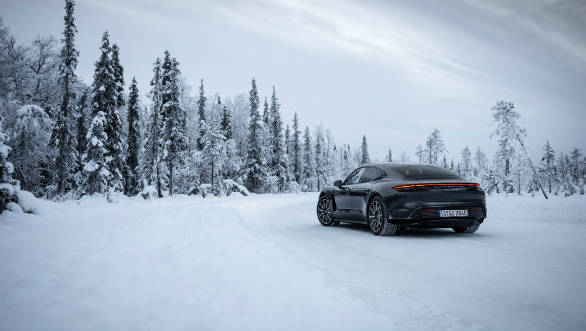 Overall then, the Taycan 4S maybe an entry point to Porsche's idea of an electric vehicle, but what an entry! It is a car that compels you to gloss over the fact that it's an EV, and concentrate more on the bits that scream Porsche. Because at the end of the day, you won't be acquiring this to save the planet or any of that jazz. You'd buy a Taycan simply because it carries on the tradition of great driving cars. 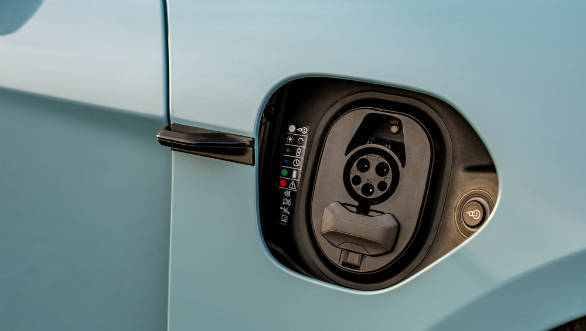 The Taycan is the first electric vehicle in the world that utilises a battery pack with a system voltage of 800 volts instead of the 400 volts used in conventional EVs. This allows it to be charged faster, reduces weight and installation space of the cabling. Each of the battery modules has an internal control unit that manages temperature and voltage. It's a pretty smart system.
The management system does some pretty clever stuff. It can, for instance, precondition the battery depending on the external conditions bringing the battery temperature up to optimal performance range when it's connected to a charging station.

The system also studies the power consumption of certain elements like the climate control system, and the condition of other components based on outside temperature, humidity and sunshine, and the selected driving program. The battery range is then calculated using these figures. So for instance when the route guidance is activated, if the management system detects that a destination can be reached with a low battery charge, the system will switch to a more energy-efficient program and a different climate control mode.

Porsche firmly in the EV race with the new Taycan

2020 Porsche Taycan EV to be priced between Panamera and Cayenne