A growing trend around the world shows that buyers are shying away from boring people carriers and preferring three-row SUVs instead. That's also one of the reasons why the new Innova borrows a Land Cruiser-inspired design and why the Hexa sheds its MPV form for a more butch, SUV design. But which one of the two is the better package overall? Let's find out. 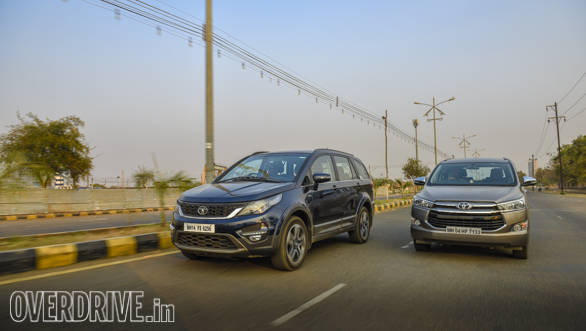 The Innova Crysta looks quite upmarket now with its clean lines, smooth contours and improved paint quality. It masks the people carrier form with beefy bodywork that is wider than the glasshouse, has sharp designs for its headlights and tail lights, and gets flared wheel arches with smart 16-inch rims. It employs LED headlamps with projector lens, a smart-looking two-slat grille and large bumpers that give it more muscle than its predecessor. But the lack of any skid plates, roof rails or protective cladding does take away from its ambitions of looking more SUV than people carrier, but overall the design is quite pleasing to the eye and does not look like a boring breadbox on wheels. 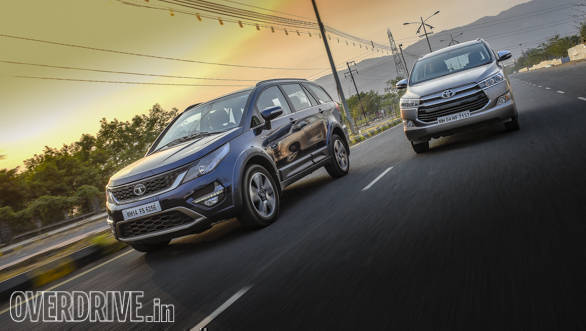 The Aria-derived Hexa looks a tad busy in comparison, but does a good job of shedding its previous MPV form and donning a more muscular stance. Contributing to that effect are the massive 19-inch wheels, the chunky bodywork, Land Rover-inspired bits, the wide grille, and the pulled-back headlights with their smoked finish and sinister-looking detailing. The horizontal tail lights and the wide chrome bar connecting them highlight its width. Speaking of which, the Hexa is wider, longer and almost as tall as the Crysta. It has no problem coming across as the more muscular car of the two, and if that is what you are looking for in your people carrier, the Hexa could appeal more to you.

Step in and you will also appreciate that the cabin has undergone a similar transformation. The dashboard looks smart despite its old-school design, and though the cabin is finished in all-black trim, the Hexa still comes across as a spacious car. What it lacks though is enough space for knick-knacks and that is a downer for a people carrier. As we highlighted in our previous reports, it also has some shortcomings with the tumble mechanism for the second row of seats in the 8-seater variant or the design of the centre armrest. 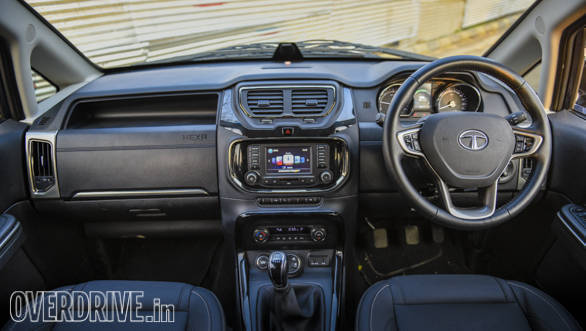 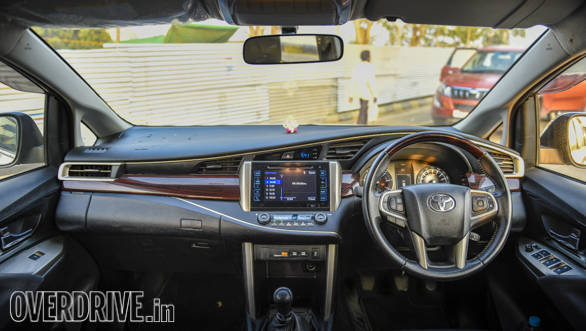 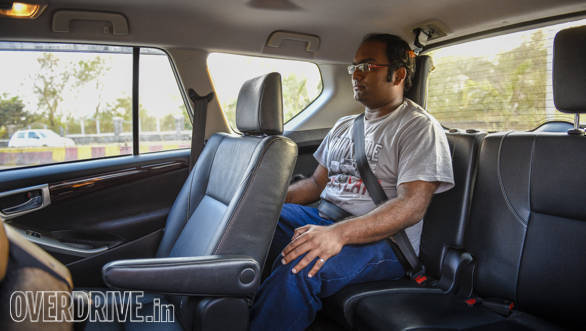 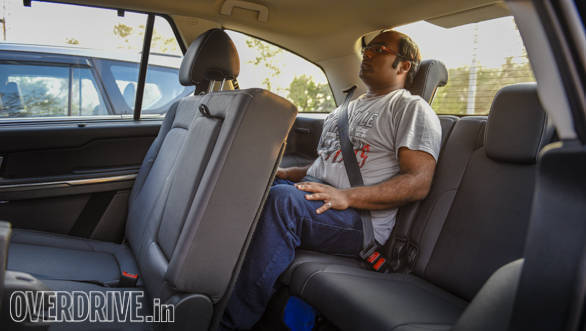 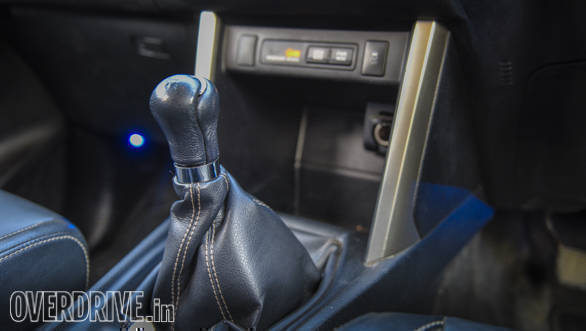 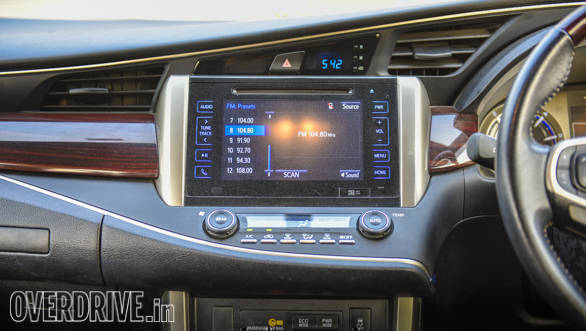 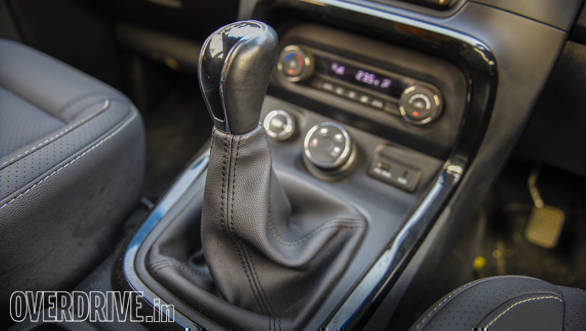 Both these cars can be had in 7- or 8-seater variants (depending on the trim you choose), but the Innova has better ergonomics and is also the easier one to get in and out of. Though a tad low on space than the Hexa, the seating in the second and third rows is more comfortable, thanks to the seats those are larger in size and have better cushioning and contouring. The Innova impresses even when you are traveling full house. The roof-mounted AC vents work better for overall air circulation than the Hexa's floor and B-pillar arrangement.

There are plenty of storage spaces for knick-knacks and water bottles. In fact, the Innova has so many of them that you might even forget what you stored where. It boasts of a larger infotainment screen, but the system isn't as feature rich as the Hexa's, which gets its own army of smartphone apps. Audio quality is comparable between the two.

Both the Innova and the Hexa offer a commanding driving position as compared to other 7-seaters like the BR-V or the Lodgy. They offer good all-round visibility too, but the Hexa edges ahead with its slimmer dashboard profile and broad bonnet which makes it easy to get a judgment of its corners and length. Neither of these gets a sunroof. Both the cars get ambient lighting, but the Hexa pips the Innova with more colour options. The Innova has the better kit though with features like powered seats, keyless entry and go, and LED headlamps. It also does a better job of spreading this equipment across multiple variants, unlike the Hexa, which packs all the goodies in only the range-topping trim.

The Innova Crysta offers a choice of one petrol and two diesel engines. As we concluded in our previous reviews, the diesels make more sense for the Innova, and the one that compares naturally against the Hexa is the 2.4l. It can be had only with a 5-speed manual transmission. With an output of 150PS and 343Nm, it certainly isn't as powerful as the unit in Hexa, but the performance figures suggest otherwise with quicker acceleration and roll-on figures even with a full house. The numbers are justified further as the engine feels more eager to rev and builds power and torque quite quickly for an MPV. The meat of power and torque comes in at a little over 2,000rpm. Pulling overtakes doesn't need much planning and you don't need too many gear shifts in the city environment either. Speaking of gear shifts, they feel a tad notchy. The clutch isn't too heavy but the pedal has a springy nature to it. Add to it a heavy steering and the Innova becomes quite a handful to drive in city conditions.

The Hexa comes with the choice of only the 2.2l Varicor diesel motor but lets you choose from two states of tune - 350Nm for the base spec and 400Nm for the mid and range-topping trims. The latter is the one we recommend for its performance benefits. Like the Innova, this one too comes with driving modes that let you alter engine response to suit urban or highway use. The engine, however, isn't as refined as the motor from Toyota, but gives you the choice of a manual as well as an automatic transmission.

As we mentioned in our previous report, the automatic is surprisingly good and on par with gearboxes from cars that are a segment higher. The manual, on the other hand, highlights the age of the Varicor drivetrain - the shifts are rubbery and the throws for the gear shifter are long. Add to it a heavy clutch and an even heavier steering, and you realise that the Hexa is as difficult in the city as the Innova.

We tested fuel economy for both the cars with seven people on-board, and the Innova came out on top, delivering 13.6kmpl overall, compared to the Hexa's 12.1kmpl. In our regular fuel economy tests comprising of a single passenger, the Innova was more fuel-efficient in the city, while the Hexa was more frugal on the highway.

The Innova Crysta continues to use a body-on-frame construction like its predecessor and employs a double wishbone with a torsion beam at the front and a 4-link set-up at the rear. While it takes on undulations and bad roads quite well, it does tend be a little bouncy under a light load. With a full house, the ride is much better. The Innova does feel stable at highway speeds, but over sharp bumps it tends to feel skittish. It feels quite taut around bends with relatively low vertical movement for a vehicle this tall. Handling isn't unnerving then. Braking is quite good too, under light as well as full load.

The Hexa also uses a body-on-frame construction which gives it the rigidity to go off the road without breaking a sweat. But despite that, it impresses as much around winding roads as it does at bump adsorption. The steering has a fair bit of kickback every time you hit a pothole. But out on the highway or around bends, you will appreciate its communicative nature.

The Hexa also remains composed irrespective of how many occupants you plonk into the cabin. On the highway, it remains quite stable at triple-digit speeds and maintains most of its composure even under heavy braking. The grip from its tyres is surprisingly good and the option of a 4x4 drivetrain on the top-spec trim only makes it better.

Both the Innova and the Hexa can get quite cumbersome to drive in the city with their heavy steering and clutch. Out of the two, the Hexa certainly offers a better ride quality, but the Innova is a more comfortable car to be in, thanks to the comfier seating.

Safety is paramount and more so when you are likely to travel together as a family. The Innova edges ahead the Hexa in this regarding by offering three airbags as standard and up to seven airbags on the top trim compared to the Hexa's six airbag set-up. It also gets ISOFIX points for safely securing child seats. While no crash test ratings were available during this test, we believe that the new-age Innova could offer better structural safety than the Aria-derived Hexa.

But the better features, comfort, safety, performance and reliability of the Innova Crysta certainly come at quite a premium - so much that you could easily buy yourself a top-end Hexa with either an automatic transmission or a 4x4 drivetrain and still have plenty left for accessories and personalisation. In that regard, the Hexa is easily the more value for money product and quite well packaged at that. But if the price difference doesn't pose a concern, then it's the Innova Crysta that wins my vote.