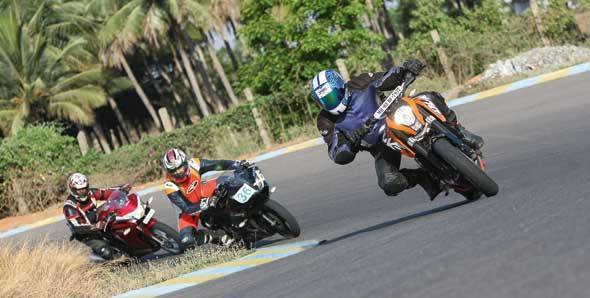 Can the KTM top the Yamaha YZF-R15 on the racetrack or not? That is the question left hanging from last street-based shoot out where the KTM showed what it's meant for and what capabilities it possesses. But then while heading out from Mumbai towards Coimbatore for this track test - based at Kari Motor Speedway during a Indimotard-OVERDRIVE TWO Track School - we decided the CBR should also come along. It wasn't the most successful motorcycle at the track test last year, but it did hold its own. And no matter what we said, its lap time was quicker than the R15 thanks to its extra displacement. Plus, it would a good send off for my long term CBR which is now supposed to head back to Honda.

So this test, then, is all about the track. This is where motorcycles show what they can and will not do. Where the more practical considerations of daily life - pillion seats, economy and what have you cease to matter. Where the battle is to eke out ever more speed. Where, as Anand likes to say, the bullshit stops. Price remains a consideration, mind you, because before you can race it, you have to buy it.

We could have brought along other motorcycles like for the test we did last time round but we consciously curtailed the numbers. We have already established that this is the top three and nothing has changed in the products since then. The Ninja 250R, of course, is a strong track motorcycle but at nearly three times the price of the KTM, it is hard to put into perspective here.

The obvious difference between the three motorcycles is seen at the end of the main straight. This is a place where the KTM loses some time because its short gearing brings up its top speed 133.26kmph (all measurements are based on Anand's laps) shortly before the pit lane exit and from then on, it's harshly banging off the redline till you start braking. The CBR is slower to gather speed in feel but is still accelerating when you brake, hitting 137.4kmph while a wildly optimistic speedometer on the R15 shows immense promise although the VBOX confirms that it's only going 129.04kmph.

But the very same short gearing helps the KTM immensely everywhere else on the racetrack. It allows the KTM to accelerate with force in every gear at almost any revs, and the numbers bear the story out, the Duke lapping the track in 1 minute, 23 seconds. The KTM is quicker in every section of the racetrack, about a second quicker than the CBR  Anand's fastest lap on the Honda being 1 minute and 24 seconds. The KTM is roughly three-four seconds ahead of the R15, the Yamaha managing a best lap time of 1 minute, 28.8 seconds in Anand's hands..

But Anand notes that this is not the whole picture. He says, "I rode the CBR last of the three on the timed laps and I had to ride it much harder to get that lap time. The KTM would be further ahead and the R15 closer."

He then explained, "While the Honda engine is a little rough at the bottom as well as near the redline, it does have good grunt. But the issue is the soft suspension which means even though you don't run out of ground clearance - which happens on both the other bikes - you do have to learn to trust the wallowing, squatting and hence unstable feeling chassis. Once you do, you have to work hard to go quick, but it is possible."

In both the chicanes, for instance, the CBR feels the heaviest to change direction, but the issue isn't the weight, it's the suspension movements that need a moment to settle before you can apply more throttle. In fact, we believe a CBR with a stiffer front fork alone would feel vastly superior at the track.

The R15 till now the superior tool for the track is, frankly, outgunned in the engine department and that brings the focus on to its chassis. The difference in corner speeds and lap times are far lower than you would expect given the displacement and power disadvantage. That is how good the motorcycle is. And it makes you wonder why Yamaha are still making us wait for the R25. If it were anything like the R15, it would simply blow the competition out of the water. The R15, as we have said over and over is friendly, happy, eager and responsive. Its accuracy and stability at lean is brilliant and were it not for its power disadvantage it would perhaps have won this test. However, in this company, for all its virtues, it loses time in every single corner exit and still more down the straight, a deficit it cannot make up with its chassis. A deficit that makes the price parity with the KTM very hard to ignore for a track-head. That said, this was also my first track outing with the R15 v2.0 and I believe the old one would be slower but would feel better than this one. The extra rubber and the more committed riding position promise a motorcycle that the engine cannot currently deliver. And this little intangible makes the new R15 less effervescent than the old one by just enough to make me want the old one again.

The KTM then is more than just the quickest motorcycle in this company. It's very odd to start with. That riding position is very aggressive for the street and properly weird for the track. To be fair, it is the only motorcycle here which has no obvious track cues except for the Ready to Race tag the brand wears. But then again, it really is ready to race. It feels racebike light, the engine has impressive grunt, and a sonorous, loud soundtrack as well as a sticky-tyred, wonderful chassis.

What it does is steadily and assuredly dismantle the challenge of the other two motorcycles here. It might feel a bit weak on the brakes into turn one, but flicks to full lean much quicker than the others, holds more corner speed everywhere on the track and powers impressively and urgently out of every single corner. So much so, that riders of much bigger machinery who borrowed our KTM (one of an impressive seven that turned up at the track) noted the sense of the rear tyre hooking up and driving forward.  A distinct big motorcycle sensation that you feel clearly on the Duke.

It does have one weak spot though - tentative riding. Abhay said, "It's not a chilled out motorcycle to ride. It wants to be ridden hard. As hard as you can and not one bit less. In the second chicane, for instance, it wants commitment. Be hesitant with the throttle and the KTM will cause the most amounts of trouble of the three. It will slide a bit as it passes the surface changes and the bumps. It will feel like it is laughing at you and that the suspension is too stiff. But throw away the worries and wring the throttle and it transforms into a wonderfully composed missile shooting hard and fast out of a very bumpy, difficult corner to get right."

This is an essential difference between the R15 and the KTM. You can take the R15 for a few laps and choose to back off from full pace and enjoy a smooth, quick but not flat out ride. This can be a lot of fun, and is a good way to recover focus and energy after a burst of fast laps. But the KTM doesn't like this trundling along one bit. It constantly urges you to go quicker, to commit more and up the pace.

The issue with the KTM is ergonomics. You can see they aren't designed for the track. Hang off and the tall, wide handlebars straighten the outside arm which feels plain weird. The rock hard seat and the rearset pegs feel right until the latter grind down hard and then you think a little further forward but higher would be nicer. The lack of useful heel plates is another niggle (I cannot live without heel plates so I got a friend to mount a set of R15 heel plates on mine).

You can and will eventually stop paying attention to these though. For the KTM goes where you point it, comes on the power hard whenever you want and the chassis is stiff, planted and confident. Anand also liked the tyres, "I think MRF have done a great job with the KTM's radial tyres. I think these are even better than the R15's MRF tyres, which I thought were the best until now. After two days at the track, where the R15 tyres get chewed up - though they didn't  start sliding around - the KTM tyres shows only minimal wear. And they are gripping, hooking up and working much harder than those. The Continentals do all right. They work hard but you sense that they are a harder compound and that grip levels, comparatively speaking, are a shade lower than the other two. That usually means longevity, but that isn't a track test consideration."

On the whole, after two days of riding, nearly a thousand kilometres worth of track time, the verdict was clear. The R15 has the best riding position and chassis balance but it doesn't have the engine to keep up. It is still a wonderful, wonderful motorcycle to ride, in general as well as at the racetrack but it isn't the best of the lot anymore. For a new rider coming to the track, it still is the learning-the-art tool of choice. But now it feels too expensive for what it is in this company.

The CBR has wonderful grunt and great brakes but the soft suspension hamstrings an otherwise neutral and trustworthy chassis. What makes the CBR a great highway motorcycle is exactly the thing that holds it up at the track. The less committed ergonomics you can live with, it never grinds any parts easily and the handling once suspension settles is stable. But as the most expensive motorcycle here, it also shows the greatest reluctance to being hustled at racetrack speeds.

And that means the unlikely king of the racetrack is the KTM 200 Duke. Which is supposed to be India's first purpose-built street bike, as it were. It doesn't have the biggest displacement, highest price or a fairing-clip-on type track orientation. But forceful engine, light weight, superb chassis and tyres and incredible one-unit feel elevate it well above its competition. It doesn't have the ergonomics to be instantly at home at the racetrack. But boy does it manage.