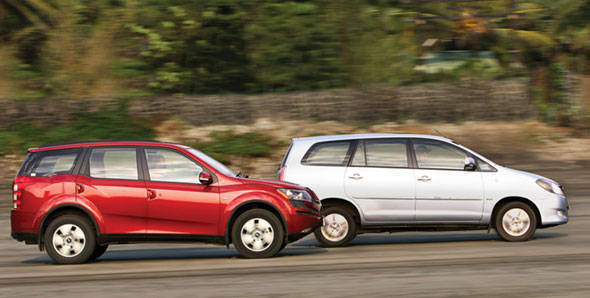 Seven years and it has yet to be bested. Seven years and still a waiting period. No discounts despite a facelifted one mere months away. The Toyota Innova has been an unqualified success appealing to individuals, corporate and taxis. It's unlikely the Mahindra XUV500 in India will wean the latter two of their Innova fixation but the XUV is sure to appeal to individuals, hence this comparo.

Cheetah and African inspired styling help the XUV sprint far ahead of the Innova, and the balance won't tilt much even with the facelifted Innova due at the Auto Expo. Customers definitely love it - 8000 bookings in just 10 days of its launch forcing Mahindra to close bookings is proof enough. You don't have to be obsessed by style to succumb to the lure of the XUV. Step inside though and you might consider the Innova's to be a bit plain compared to the XUV's highly stylised cabin. Lacking in equipment event compared to the XUV's mile-long feature list. However prod and poke and one thing becomes immediately apparent  materials, build, quality and finish is far better in the Innova. The Toyota is more commodious too with comfortable individual captain seats in the middle that slide on rails and a third row that can seat adults over long distances.

The XUV is built on a new monocoque platform while the Toyota Innova in India still continues with body-on-frame construction but such is Toyota's engineering nous that it is the Innova that feels more car-like. The ride quality of the Toyota is appreciably stiffer and more bumps are transmitted to the cabin but behind the wheel it is like a car to drive with better steering precision and feedback, more outright grip and more planted and sophisticated road manners. Despite which the XUV will show the Innova a clean pair of heels thanks to its engine. The Toyota 2.5-litre D4-D unit produces 102PS of maximum power and 200Nm of peak torque, way off the XUV's 140PS and 330Nm. As is to be expected the performance gap is huge, 15.95 seconds to 100kmph for the Innova to the XUV's 12.86 seconds. 159.4kmph top speed of the Innova to the XUV's 184kmph. The XUV even beats the Innova on fuel economy; the highway figures are almost identical but in the city the XUV betters the Innova's 9.8kmpl with 11.67kmpl. The result is also validated by the ARAI figures  15.1kmpl of the XUV to the Innova's 13.7kmpl.

So the winner? Well there isn't an out and out winner. If you want a spacious seven-seater with outstanding quality and reliability the Innova is untouchable; taxi fleets for one aren't going to switch to the Mahindra, that's for sure. But individuals who want a little more, err, individuality will be sorely tempted by the XUV's style, performance and far more competitive pricing. Without a doubt the XUV500 is going to rattle every manufacturer playing in this price band.