When a coveted performance brand like AMG lists an S-Class derivative as its flagship over a maniacal sportscar like the GT R, you need to understand that there is more to that car than what meets the eye. The S63 coupé is the top of line AMG that you can buy in India today and it isn't hard to see why it deserves that office with a commanding view of the entire office. 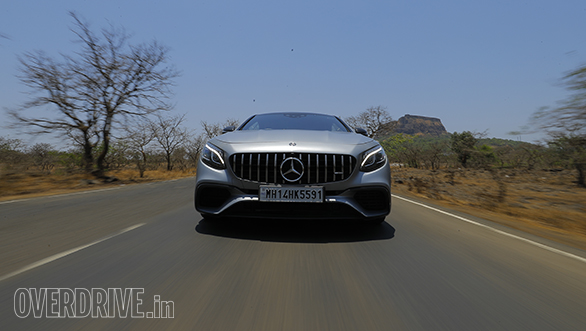 The heart of the matter

AMGs have traditionally built the go-faster versions of mainstream Mercedes-Benz cars and therefore, tagging them as dual-personality cars are quite cliched. The S63 coupé, however, is more than just an S-Class coupé with a big engine. Ironically, it has traded its massive 5.5l V8 for the smaller bi-turbo 4.0l V8. It belongs to the same bloodline of engines as the GT R, but this one wakes up in a more restrained, tamed manner than the snarling GT R. But it's just mannerism, for restrained it is not. Using its two turbochargers that reside in between the vee of the cylinder banks, the engine churns out a staggering 612PS and a colossal 900Nm! 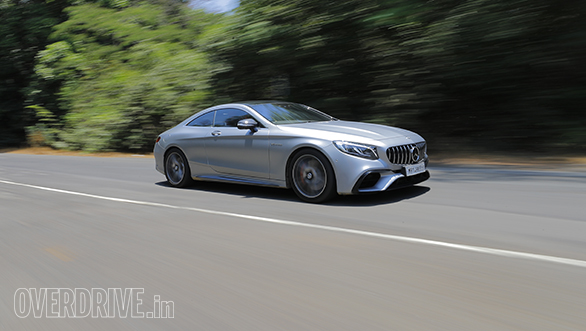 What you do with all that torque in this sports tourer literally boils down to what mode you are driving in. Leave it in the default Comfort mode and the car makes quick progress, moves up to higher gears and rides the torque to cruise effortlessly. Toggle into Sport+ mode and the engine become violent and the 900Nm of force will leave a trail of rubber and smoke every time you put your foot down, and race to the 7,000rpm redline. This is raw power that the traction control system can tame, but won't quite. And it's all in good humour. AMG humour. The kind that needs you to keep steering even when going straight! There is, of course, a Race Mode and launch control for tidier acceleration off the mark. Feed this system with 99 octane fuel and you will hit the ton from a standstill in around 3.5s. That is GT R territory and the S63 authoritatively intrudes into it even with its 2-tonne weight. 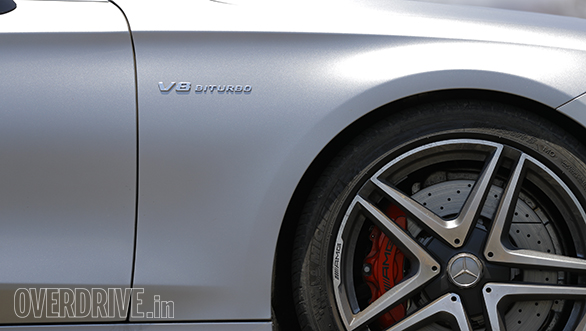 The S63 coupé is electronically restricted to 250kmph, but a paid unlock gets you a 300kmph tune. However, we are told that it is quite sensitive towards lower octane fuel. We went touring in this car for over 2,000kms, during which we observed that the S63 runs marginally hotter on the 93 octane fuel that is more readily available. The engine has plenty of crackles and pops as you would want, but it isn't as loud as its GT siblings. It has enjoyable hums and growls which is great music for sports touring. 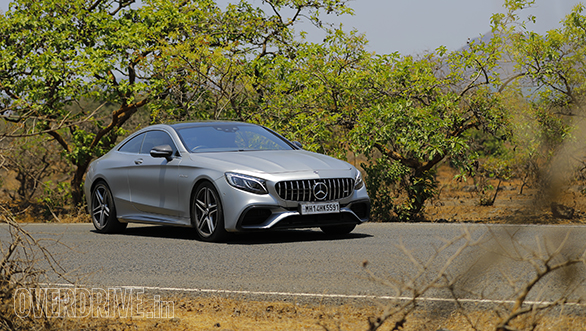 The engine is surprisingly fuel efficient and gives the S63 an excellent driving range, too. Our drive from Bengaluru to Mumbai averaged at ~11kmpl which is phenomenal for a 612PS V8! That also makes it more efficient than some of the lighter, smaller and less powerful sportscars that I have driven lately. It is down to the technology that the S63 packs in. Apart from the finely tuned turbochargers, the relatively smaller capacity of the engine and its ability of shut off four of the eight cylinders at cruising speeds, ensures exceptional efficiency and in turn, lower emissions. The cylinder deactivation works only in Comfort mode and between 1,800-3,250rpm, which is usually the range you will drive in on our highways. Even at speeds of around 150kmph, you don't get a sense of the pace and the S63 cruises at that speed at an effortless 1,500rpm! 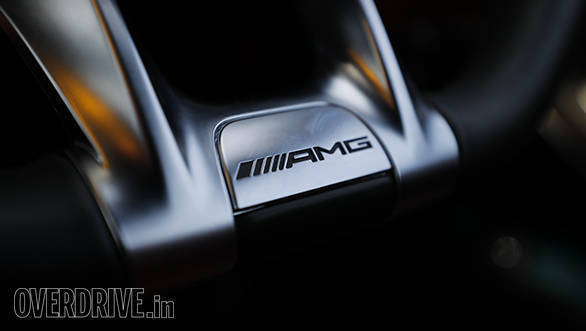 The nine-speed multi-clutch transmission works equally well too. It has faster responses than the seven-speed torque converter that was mated to the 5.5l V8. It can sometimes act confused in Comfort mode, but the Sport and Race mode keep it adept. For majority of our driving time in the S63, we found the Sport mode to be the perfect balance for speed and handling. 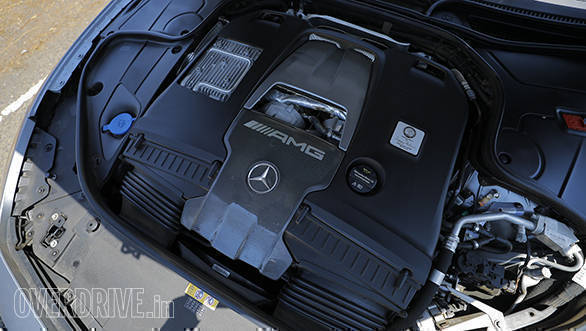 The S63 coupé is a fairly large car and it makes that mass evident when you hit winding roads. It's far from being unnerving, what with its electronic aids, adaptive dampers, telepathic suspension and impressive mechanical grip. But you do need to work a bit to get it pointed in the direction you want, especially at speed. But it's oddly satisfying too: imagine tearing through a twisty mountain road, tailing a traditional sports car that's trying hard to lose you, and being pampered in your seat as the bolsters turn left and right to hold you in place, while the rest of the seat massages your shoulders and back. There are other cars that may offer similar functions, but none in my memory do it with the swag of the S63 AMG. 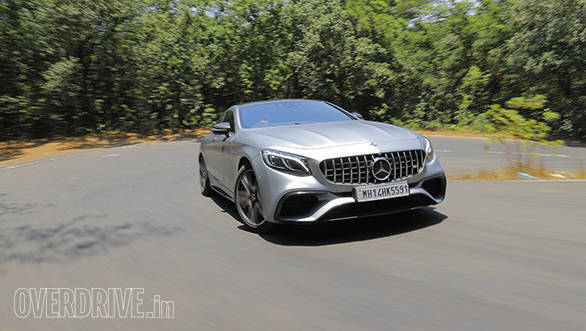 The ride quality is exceptional for a sports car of this calibre. It's not every day that you decide to take on 2,000kms the fabled Indian roads is an AMG, but the S63 left us impressed. From the broken roads of Hampi to the tall speed humps of Mumbai, the S63 did not scrape its underbelly or kerb it's wheels anywhere. If need be, it can happily raise its height and tackle its way forward.

Alongside the usual safety net of airbags all around and electronic aids, the S63 AMG also comes with radar guided cruise control and automated braking. We found the latter to be quite intrusive for the Indian driving conditions, but it was only a matter of getting used to (or switching it off). At highway speeds though, it is a great system to have and works fairly well even with the inconsistent road markings. 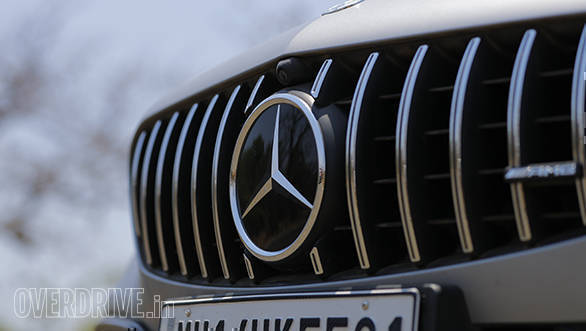 We were presented with our test car at a supercar rally in Bengaluru and in the gathering of other Germans, Italians and a crowd of G AMGs, the S63 claimed its own corner spot, looking remarkable and managing to make the other sports cars appear like they were a part of a herd. Don't get me wrong, they all look great. But while most new sports cars with their aggressive wings and large dams seem to be designed by science, the S63's simple coupé form stands out like a graceful piece of art. It has a monolithic form, and the silhouette arcs a seamless flow from the nose to the tail. That simplicity makes the side profile the best angle for the S63 and it looks it's best in the golden light of a sunrise. 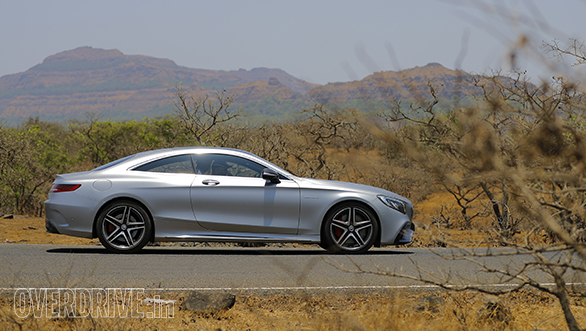 The bling of the diamond grille and the Swarovski crystals of the previous S AMGs is replaced with the simplicity and poise of the Panamerica grille. It has a great legacy with its 300 SL roots and its modern day translation is that of immense power, thanks to the likes of the AMG GT line up. It looks equally charming on the S63 too and stops onlookers in their tracks in an instant. They get an equally rewarding sight as the S63 moves past them - thanks in part to the OLED taillights that manage to look simple and yet very sophisticated. With their wafer thin design, the OLED elements look like the scales of a fish, and at night they come to life with a lovely animation. Such theatrics are the future of taillights and they will only get more interesting from here on. 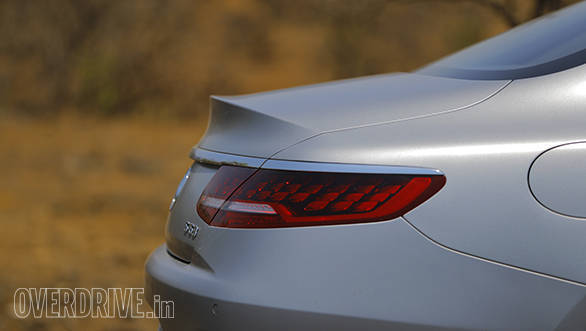 The headlights on the S63 are also one of the best functional interpretation of adaptive multi-beam lights that I have used in India. From drawing patterns on the road to avoid dazzling other road users, to specifically highlighting road signs and obstacles - these do their job as expected. The only thing I would probably want differently is a better running-light signature. The one seen here is very C-Class. 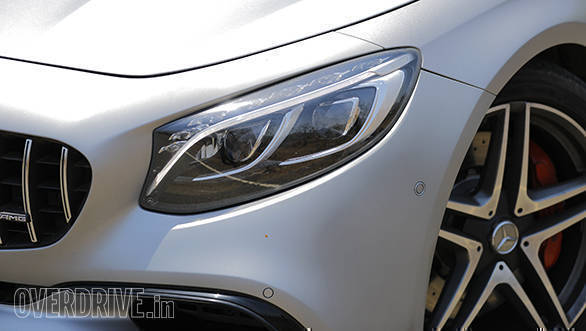 The cabin of the S63 coupé is a beautiful place. I have been wowed by it ever since I first saw it and the deep red leather trim is the one you want to choose! I was so consumed by it that I even bought a matching leather strap for my watch before starting the road trip - talk about indulgence! Our car was also specified with gloss carbonfibre inlays and a 23-speaker Burnester audio unit. The latter deserves a mention because the detailed design of the speaker housings adds further oomph to the cabin. The cabin also has a photoelectric glass roof that can go from transparent to a tinted opaque at the touch of a button. It's a party piece, just like the seatbelt butler. 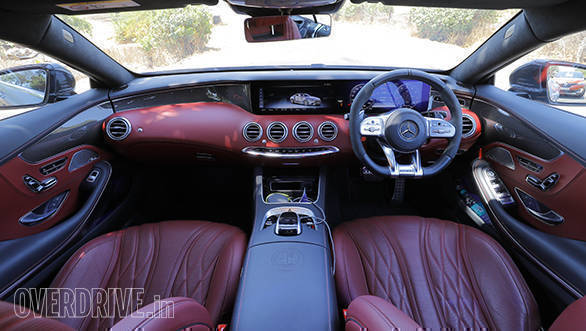 The coupé glasshouse seems narrow, but the absence of a B-pillar ensures great visibility for the rear seat passengers too. The rear bench is fairly comfortable even for adults and wide door openings ensure easy ingress and egress. The front seats get massaging and ventilation along with a host of adjustability. The touring capability of the S63 is complemented further by a fair amount of storage spaces in the cabin, and a fairly large boot that can swallow two large suitcases if you leave out the space saver spare. 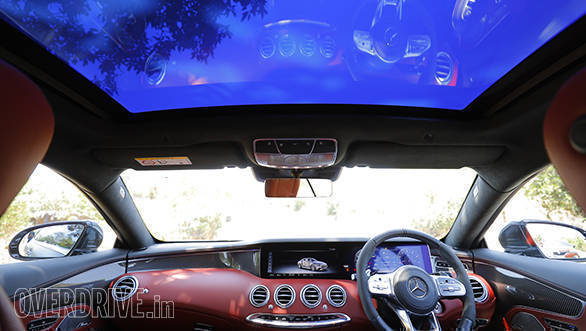 The ride quality is above par and more often than not, the S63 AMG feels just has cushy as a regular Mercedes-Benz sedan. The S-Class connection is highlighted further with how silent the cabin is, cutting out the sounds of the urban chaos and only letting the sweet soundtrack of the V8 filter in. 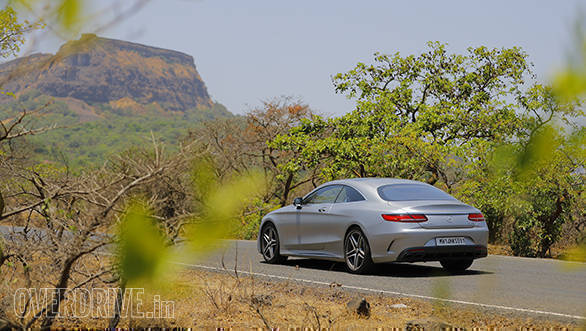 There are sports coupés and then there is the S63 AMG coupé. From the form to the pace, it has every thing you expect of a car that rolls out of Affalterbach, while at the same time ensuring the attention to detail, the finesse of craftsmanship and and level of comfort is worthy of the S-Class badge. Our road trip gave us a chance to live with the car and experience it across varied road conditions and every bit of it felt rewarding in more ways than one. 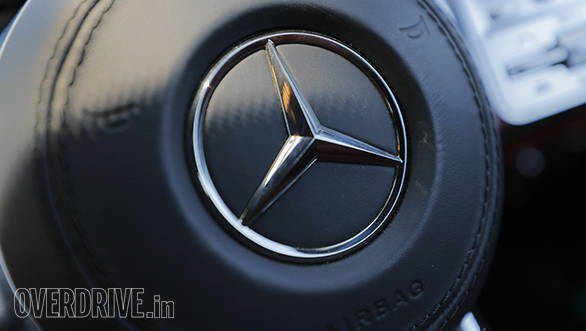 When the S63 is in its element, there is drama on the outside with the smoking tyres and the growling exhausts, but on the inside there is a sense of calm, opulence and elegance. Now that's not dual personality, but just an AMG S-Class being itself!