The idea of grand touring is one that all automobile enthusiasts can relate to -- an escape from the dull monotony of everyday life in a comfortable, sporty and practical vehicle. Add the option of lowering the roof and you have the ultimate grand touring experience. Except, a lot of the convertibles in the market are neither comfortable nor practical. But things, at least from appearance, are looking different with the new Mercedes-Benz C300 Cabriolet. 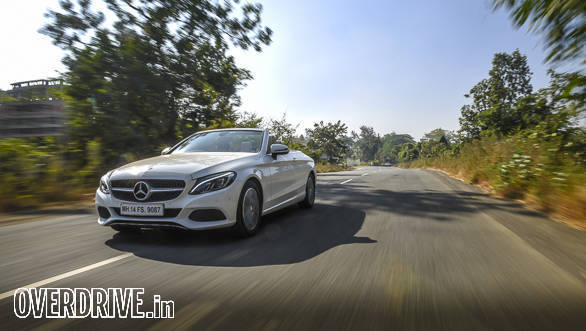 It's based on the C-Class sedan and takes cues from the Mercedes S-Cabrio. The C-Class has been regarded as a very practical and comfortable sedan, especially in Indian driving conditions. The S-Class Cabriolet, on the other hand, is as opulent and as gorgeous as convertibles can get.

So have both their better qualities come together in the C-Cabrio to make for a successful grand touring formula?

When you look at the C-Cabrio from the front, you struggle to find any differences from the standard sedan. That's because there aren't any except for the single-slat studded grille. Not that it's a bad thing, it's just that it looks too similar to be noticed at first glance. But that's about all the similarities you'll find with the standard sedan on the outside. The side and rear profiles -- which are easily the best angles of the car with its two-door set-up, fabric roof and S-Cabrio-inspired rear -- catch a lot of eyes. 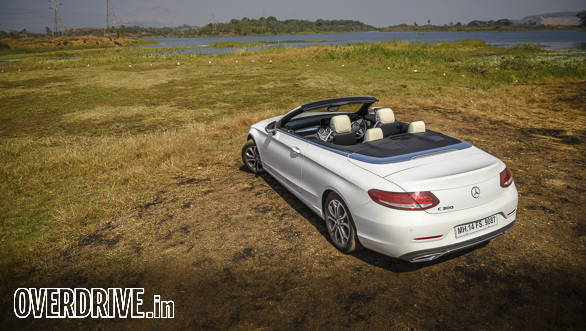 Of course, with the roof down, it's a whole other story as people will start following you around and taking photographs of you and selfies with you. True story! The fabric roof, which can be ordered in a shade of black, dark brown, dark blue and dark red, can be raised or lowered within 20 seconds at speeds of up to 50kmph. When you're going faster with the roof lowered, the C-Cabrio features Mercedes-Benz's button-activated Aircap system. It deploys an air deflector located on the pillar above the windshield, and a screen behind the rear-seat headrests. To be honest, I found that it didn't make a very noticeable difference at the front seat  there wasn't too much turbulence even with the Aircap system deactivated. 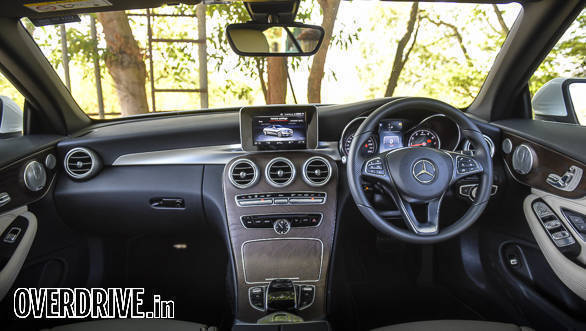 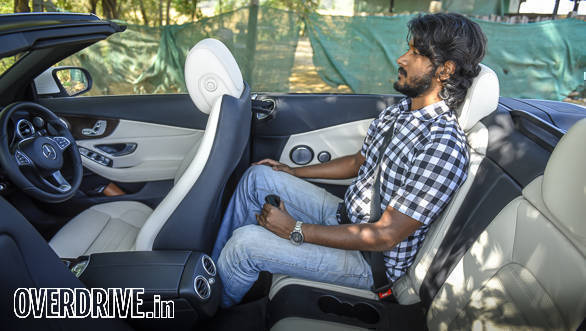 The C-Cabrio's centre console and dashboard layout is identical to the C-Class sedan and the GLC. But that's not necessarily a bad thing, is it? It looks very modern and premium with close attention to detail. Build quality, as you'd expect, is impeccable. All the seats, however, are new. There's also a decent amount of rear legroom to seat two adults comfortably. And with the front seat pushed forward all the way and the roof folded away, there's enough space for the rear passengers to simply stand up and step out of the car gracefully instead of having to squeeze out. But ironically, while there's enough room for four people, there isn't enough space in the boot to hold their luggage. I couldn't help but laugh at the sight of the space saver occupying almost all the space there is in the already tiny boot.

Another issue I have with the C-Cabrio, and it's probably something most people face with convertibles, is the poor NVH levels. You can hear so much from the outside that I found myself eavesdropping on a conversation between an auto driver and his passenger. Then, of course, there are the few tiny squeaks and rattles from the interior that you're not used to hearing from a Mercedes-Benz. But we'll explain why later.

The C300 Cabriolet runs the same 2.0-litre turbocharged petrol engine seen in the standard C-Class and GLC. Like in the GLC, this engine makes 245PS of power at 5,500rpm and 370Nm of torque right from 1,300rpm to 4,000rpm. Power delivery is therefore immediate but also very linear. It managed to get from 0-100kmph in 7.1 seconds. The free-revving engine is quiet and refined in the lower rev range, but once it gets past the 3,500rpm mark, it makes an enjoyable raspy note. It gets a bit louder in Sport and Sport+ modes too.

Apart from that, these modes also alter throttle and steering sensitivity, engine response and the transmission's shift points. The 9-speed automatic is very responsive to throttle inputs and you don't really have to use the paddle shifters for a quick gear change. But I used them anyway, because what else are they there for, right? 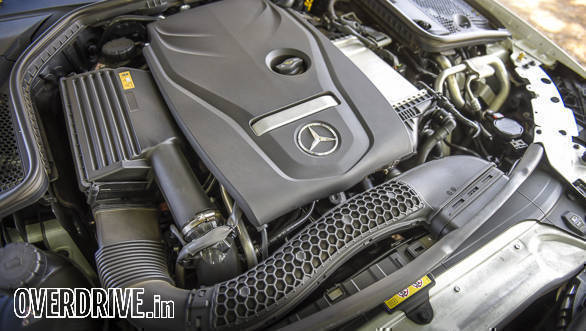 In Eco and Comfort mode, the car is easy to drive around the city with milder throttle sensitivity and a lighter steering. In Eco mode, it even manages to be reasonably efficient for a 2.0-litre turbo petrol. It returned 7.39kmpl in the city and 12.68kmpl on the highway. But let's be honest, driving in those modes can get a bit drab after a while, especially on the open roads. Switch to Sport mode and you'll have a thoroughly entertaining drive with a sharper response from the gearbox and engine. On the other hand, Sport+ can be quite a handful to deal with in our everyday driving conditions. With the throttle getting very sensitive, the car feels uncomfortably twitchy while dealing with the traffic and constantly dodging potholes. Although, I'm guessing this would be great on a track, or an empty winding road.

The C-Cabrio is neither a sportscar, nor is it a luxury sedan. And that's exactly how it behaves. Ride quality isn't as stiff as the C 63S, but it isn't as comfortable as the standard C-Class sedan either. The C-Cabrio is quite supple over the patches of broken tarmac and smaller potholes which you find in the city. But anything more and it will loudly protest with thuds. This constant bashing from the stiff suspension is what causes all the squeaks and rattles I spoke about earlier. 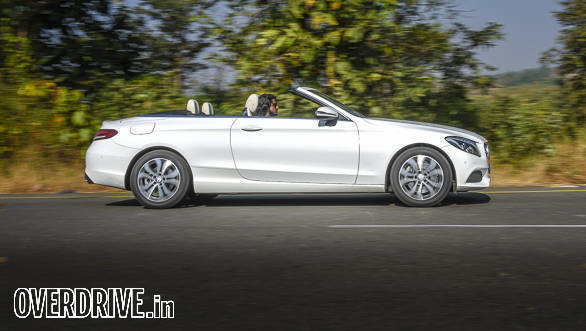 Speed breakers can be quite tricky too. It gets past most of them without any trouble -- just long enough to get you confident and a bit careless. And at the next speed breaker, you won't slow down enough and you'll find yourself grimacing at the painful scrape of the underbody. This makes driving the C300 Cabriolet a tiring affair, especially in Indian conditions. With your mind constantly scanning the road for potholes and speed breakers, the constant acceleration and deceleration to avoid them leaves you quite exhausted at the end your drive. 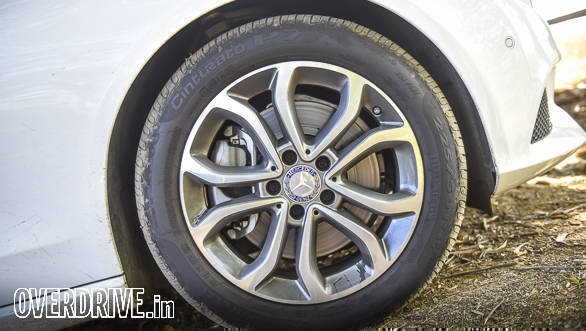 However, give the car some smooth winding roads, as rare as they may be, and you'll forget all about how much work it can be. Change in direction is sharp and precise, while cornering grip is quite confidence inspiring. The 17-inch wheels are shod in 225/50 Pirelli Cinturato P7s which are more efficiency focussed than performance oriented. Still, they do a pretty good job of keeping the car in place around corners. Due credit must be given to Mercedes for giving us sensibly sized tyres, without which ride quality would have been worse.

Apart from the cool idea of owning a convertible, the C300 Cabriolet also sells you exclusivity. At Rs 78.65 lakh (on-road, Mumbai), not every Tom, Dick and Harry will be flocking the Mercedes dealerships to own one. If you buy one, you can be sure you won't find too many in your vicinity. However, is all that worth the money? Not for me.

The C-Cabrio isn't the kind of car you'll be able to use on a day-to-day basis, simply because of how tiring it can get to drive around. Unfortunately, it isn't the kind of car you can take out on a long weekend road trip either because of the lack of luggage space. What it is, is a sporty convertible that can accommodate a family of four comfortably for the occasional day trip to a nearby destination. Not many convertibles in the market today offer as much rear-seat comfort, as this one, and that's its biggest stronghold. The C Cabriolet bridges the gap between the exciting experience of a sportscar and the practicality of a luxury sedan quite well, but the lack of storage space and the low ground clearance prevent it from being the proper grand tourer we had hoped it would be.