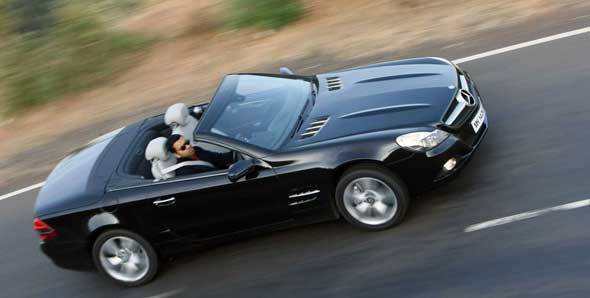 I heard god for the first time in an SL, and he was shouting. Loudly.  Very loudly. So much so that the whole of Rajasthan woke up.

Picture the scene: the arrow straight roads around Jaisalmer; a fleet of AMGs, the first batch to land on our shores; C63, CLS63, S65, nothing in the fleet costing less than a crore of rupees; and the car I'd just taken the roof off of - the SL63 AMG. God's own sound box. And boy did we exercise his vocal cords that day.

I described it as Moses shouting out the 11th commandment. It was the sound of thunder, except even more terrifying. If there was an ocean it would have parted; the desert sands picked up their skirts and scurried for the border. The border was on high alert.

For a petrol head the day you put your foot down in an SL63AMG - make your own thunder - is the day you've made your bones.

That scene was set five years ago. Since then the SL received a mid-life facelift, the runny egg headlamps first seen in 2003 morphed into the aggro mean look you see here. And we took a sinister black example to the Chennai race track and absolutely demolished the rear tyres in a fog of tyre smoke. In two hours we ran out of gas. Before that we ran out of tyres. And the cars parked in the pitlane soiled themselves in fear. One refused to start!

That was three years ago. Pay attention to those dates for what you see is a car that's almost a decade old. That's a long, long time even for the SL, each generation of which has had an exceptionally long life span. In over half a century since the original 1954 300 SL (based on that glorious Le Mans, Mille Miglia, Nurburgring and Carrera Panamericana winning gullwing 300SL race car) there have only been five generations of this capable, elegant and lavishly engineered two-seater. And next year we will get the sixth generation that was unveiled at the Detroit show this January.

In a way this is a farewell piece to a good friend, the last of the R230 generation, and weirdly this is the first SL I've driven that doesn't sport an AMG badge stuck on its butt or eight cylinders under the hood.

What the SL350 gets is a V6 petrol engine closely related to that in the E-Class that makes 316PS and 360Nm, not really worthy of the SL tag that stands for Sporty and Light. Light? At 1825kg neither is it that; in fact apart from the very first generation none of the SLs were what you'd call light.

Performance then. 0-100kmph in 8.07 seconds is quick of course but have a quick look at our car and bike buyer's guide and you will notice the diesel Merc E-Class hits 100kmph in under seven seconds. Err...

Step on it and what I miss more than even a rapid turn of speed is the noise. The SL, to me, will always be about noise - an exhaust note to make babies cry - which the SL350 just does not have. Strain your ear and you might pick out a faint note of sportiness but it's not going to stir anything in the trouser area.

Being the base variant the SL350 doesn't get air suspension, making do with steel springs instead. The ride then isn't impervious to road conditions and it is unsettled over anything less than utterly smooth tarmac sections. Sure it is a sporty car and by extension requires to be firmly sprung but one of the defining features of SLs have always been a ride that can be genuinely called luxurious; they've been among the best grand tourers money can buy. The SL350 with steel springs isn't in that league. To be fair it doesn't re-arrange your spine or rattle your fillings loose either; it isn't uncomfortable. But even the 6 Series in comfort mode outclasses it.

As for handling again her age shows through and it isn't as eager to dive into corners nor does it grip like a leech. The stiffness in the suspension sees undulating corners throw her off line far too easily but when the going gets smooth, like some of those fabulous sections on the Mumbai-Goa highway the SL comes alive. The SL350 revels in fast, flowing and smooth sweepers where it can carry a rather serious pace. And it does this while still looking the business.

It might be a decade old but it still is every bit a striking and desirable automobile. It has those classic proportions - long, low, a never ending bonnet, a cigar-shaped profile. It is beautiful. Unreservedly beautiful. Plus that nose has all the aggression you'd possibly want. On the catwalk it gives nothing away to newer rivals like the BMW 6 Series; to my eyes it is a classically more beautiful design. And though I have only seen it in pictures I think this SL is better looking than the sixth generation.

Fold away that metal roof - to dropped jaws from by-standers - and revealed is a cabin that is luxurious, beautifully built and indestructible. One benefit of being so old is the SL skipped that entire generation where Mercs were less than bomb proof. Leave aside the infotainment system that is showing its age, the rest of the cabin is hard to fault. It is lovely, as a car costing Rs 99.5 lakh ex-showroom in Delhi ought to be.

And therein lies its biggest problem. A crore of rupees! Moses thundering out the 11th commandment will be nothing compared to the screams of your CFO/accountant.