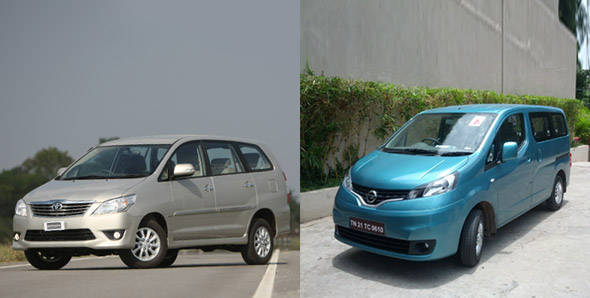 Here are the answers to some of the questions you've had about Nissan's new Evalia and how it holds up against the Toyota Innova.

Which has more space?

The Evalia definitely scores big here. It has plenty of headroom and knee room in the middle row. There's enough space for a couple of large suitcases at the back even with the third row up. We haven't actually measured the car yet but it appears to offer more space than the Innova in every respect perhaps with the exception of the third row knee room. The large sliding doors make for easy ingress but the windows that only open a crack will be an issue.

How are the engines?

The Evalia is down on the Innova when it comes to powerplants. The Innova uses a 2.5-litre diesel engine good for 102PS and 200Nm of torque. The Evalia on the other hand uses the 1.5-litre K9k diesel engine that makes 85PS of torque and a similar 200Nm. However the Nissan's power deficit should be balanced out by the fact that its monocoque chassis makes it considerably lighter than the ladder frame Innova.

Which is more efficient?

Fuel efficiency makes for a big part of the buying decision in this segment. The Innova returned an overall efficiency of 11.8kmpl in our tests. Nissan however claims the Evalia goes upto 19.3kmpl on a litre of diesel. That's significantly higher than any of its competition but we can only confirm how efficient the Nissan is after we put it through our tests.

What does the Evalia do better?

So why would you chose the Evalia over the Innova? Well the Nissan is very spacious and promises to be quite frugal. It's a practical and easy to drive vehicle that doesn't feel as large as the pictures suggest. It's also quite a dramatically styled car that's going to turn a few more heads than the Innova. Better looking though? I'm not so sure.

How are the dealer networks?

Nissan is the newer brand in our market but they've been working round the clock to set up a comprehensive dealership network. As of now they have a respectable (considering they set up in 2008) 64 dealerships. Toyota however has nearly three times more with a total of 178 dealerships across the country, so if after sales service is important to you the Toyota is a bit of a no brainer.

What about the prices?

The Innova range starts at Rs 9.5 lakhs and goes upto to 15 lakhs (on- road Mumbai). It is without doubt an expensive vehicle. We expect the Nissan to be considerably cheaper with prices ranging from Rs 7 to 9 lakhs. If the Evalia is priced well it should give the Innova an honest run for its money. How much of a run? Find out next month.