For years we've been talking about electric motorcycles and also dreading their arrival as they sound the death knell for internal combustion engined ones. But the future as we know is electric. And the country is finally getting its first electric motorcycle in the form of the Revolt RV400, from the Delhi-based start-up Revolt Intellicorp. Quite a name for an electric motorcycle, no?

Quite a looker too...

Unlike the quirkily designed electric scooters (most of which come straight from China!) the Revolt RV400 looks interesting and has all the cues of a compact, sporty motorcycle. Revolt has equipped it with a projector beam headlamp along with LED strips on either side that function as DRLs, making for an aggressive looking face akin to a streetfighter, albeit a compact one. Heck, the RV400 is even suspended on upside down forks and a monoshock! The 'tank' and its extensions add to the sporty appearance, as does the scooped seat. That said, the bike's ultra-compact dimensions mean it is just about as large as a 100cc commuter and as the images here might suggest, the RV400 is better suited to smaller riders rather than ones with a large frame like mine. 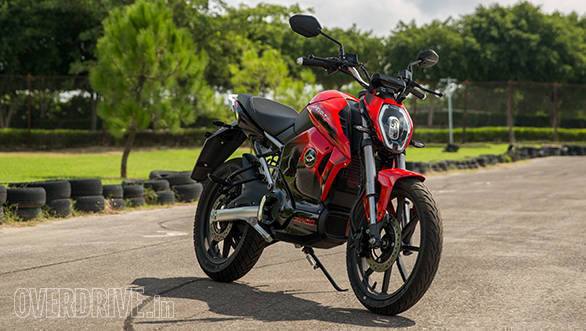 The Revolt RV400 is the first electric motorcycle to go on sale in the country and has been styled interestingly, in a bid to attract enthusiasts as well 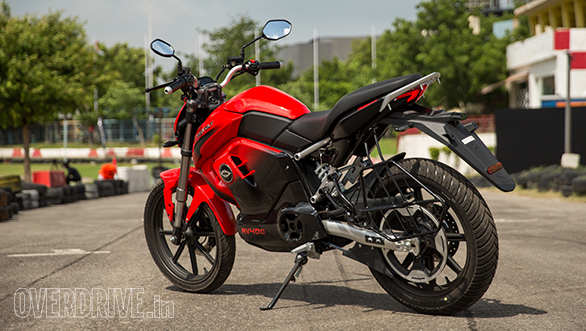 The 'fuel tank' houses the removable battery pack  removable batteries make charging batteries very convenient, as you can pull the battery out, carry it home and charge easily unlike fixed batteries that require you to search for a plug point while having to ensure your charging cable is long enough. Removal of the battery is convenient in the RV400's case but the catch is the battery's 19kg weight. That's not exactly light unless you work out at a gym regularly! To make life easier, Revolt is also offering a charging cable, along with the option of ordering a fully-charged battery through its smartphone app and getting it delivered to a location of your choice.
The most unique feature though has to be the bike's soundtrack. The RV400 has an onboard speaker that can emit different sounds and effectively you can have the bike sound like an inline-four cylinder engine every time you blip the throttle. You can change the sound through the app and there's a kill switch on the handlebar to mute it too. Revolt says the feature has been incorporated keeping the target audience in mind and we cannot disagree. The RV400 also gets three riding modes that can be changed via a toggle switch. Each mode alters throttle response and top speed, which is restricted to 45kmph, 65kmph and 85kmph in modes one, two and three respectively. 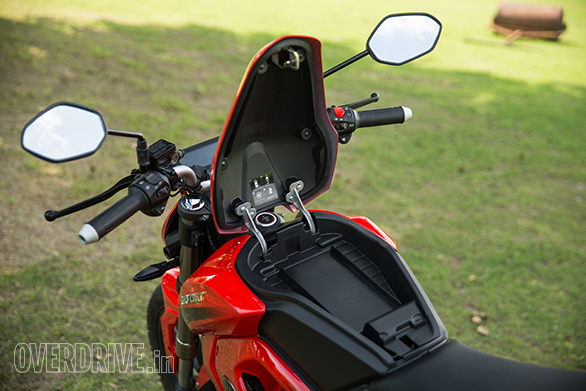 The Revolt RV400's battery packs sits where the fuel tank is on conventional motorcycles, the cover for which can be flipped open to take the battery out for charging remotely 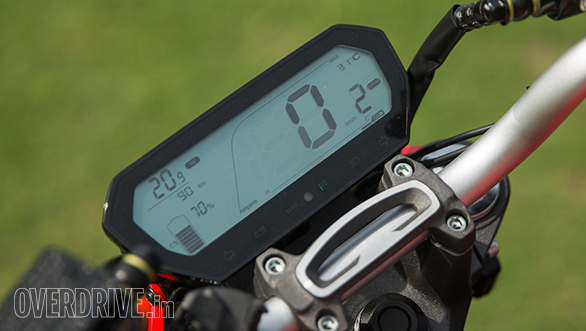 The instrument cluster on the Revolt RV400 is a monochrome LCD display that offers lots of useful information on the go including charge status, riding mode chosen, distance to empty readout and also has a tachometer styled ampere meter to tell you how much juice is being consumed with each twist of the throttle

The RV400 uses a box-section aluminium swingarm along with a bolt-on subframe and is shod with MRF Zapper tyres. Braking duties are taken care of by 240mm single discs at both ends. Oddly, the RV400 gets combined braking but no ABS for now which is glaring, and Revolt tells us it will add ABS at a later date. Build quality is good and the bike looks well-finished, though some of the edges could have been finished better. 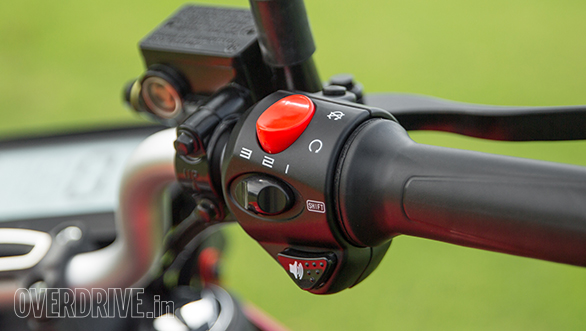 Ridjng modes on the Revolt RV400 can be changed via a toggle switch on the right side handlebar. Below the toggle switch is a button that lets you turn the sounds from the onboard speaker on or off

What about the powertrain?

A Lithium-Ion battery provides juice to a 3kW motor. Revolt is importing the cells for the battery pack from China, though the battery pack itself is assembled at its production facility in Manesar where the bike is manufactured. The battery takes four and half hours for a full charge. The RV400 boasts an ARAI certified range of 156km and it should be interesting to see the range it will offer in the real world.

So how is it to ride?

At 108kg kerb, the RV400 weighs as much as a Honda Activa. There's an eerie silence when taking off from standstill (I muted the 'sound' right at the start!), except for a little motor whine. The bike shows an eagerness to roll ahead as soon as you open the throttle and I also like how linear the acceleration is. The RV400 is quick, though only a proper acceleration test will tell us how quick though acceleration should be comparable to 125cc commuters roughly. The throttle is either on or off like a light bulb sans any modulation though, which is disappointing. The RV400 has what Revolt calls RBS or Regenerative Braking System and like most electrics these days the system is programmed to recharge the batteries when you brake, while cutting off the power going to the wheel. 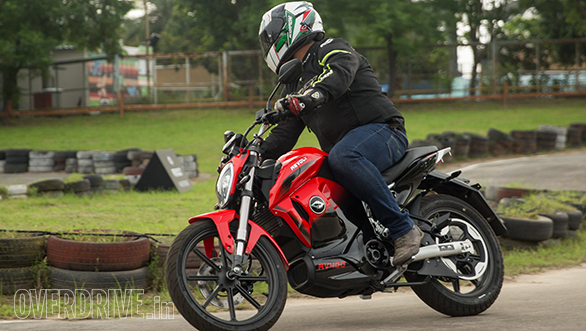 The Revolt RV400 is engaging to ride, but the fact that the throttle is cut even with the slightest pressure on either brake lever can get irritating around corners

Even slight pressure on the brake lever causes cuts the throttle though, which gets irritating when trail-braking into corners. The RV400 impresses in terms of handling around corners though. The suspension offers a confident feel, though the tyres did not offer the kind of confidence I was looking for. The suspension feels firm, as I discovered around the solitary speed bump 'placed' on track. Oddly enough the bump had been placed at a corner exit so I had to hit it while accelerating which transferred some of the shock to the bike. Stopping power from the brakes is good and the RV400 also felt stable even when braking hard, with brakes at either end offering good bite, in a progressive manner. 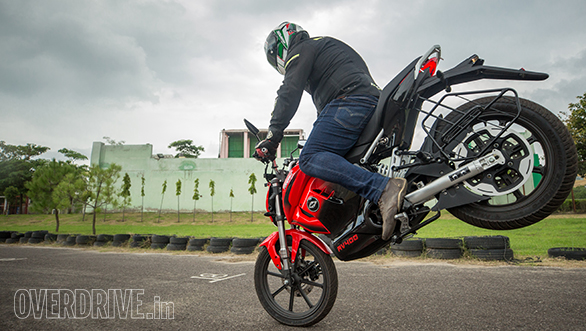 The Revolt RV400 only gets combined braking but not ABS, which means you can pull stoppies on it, but the fact that the bike does have ABS at launch is a glaring omission, especially since everything else on the motorcycle is technologically advanced. Revolt says it will add ABS in the near future though

We are yet to ride the RV400 in the real world, with the biggest question being the range on a single charge, apart from questions about charging infrastructure and battery on demand service. Revolt has received over 3,000 bookings already which goes to show the how much interest the RV400 has garnered, being the country's first all-electric motorcycle. It impresses as a package as everything seems in order with what one would expect from an electric motorcycle pegged as a commuting tool. The biggest question of course is the price. And Revolt has sprung a surprise on this front...

Revolt Motors has introduced a new, disruptive pricing strategy for the RV400 wherein there is NO ex-showroom price and NO on-road price for the motorcycle. The motorcycle can be 'bought' via monthly subscription plans only, which are valid for 37 months. At launch, Revolt has introduced three models - the RV300, RV400 Base and RV400 Premium (the exact same spec as the RV400 base but includes a free tyre change at the end of the three year subscription). The RV300 is essentially the same motorcycle with a lower motor rating. Pricing, or rather ownership plans begin from Rs 2,999 per month for the RV300, Rs 3,499 for the RV400 Base and Rs 3,999 per month for the RV400 Premium. Revolt has made it clear that these are not lease plans and the bike will belong to the buyer from day one itself. 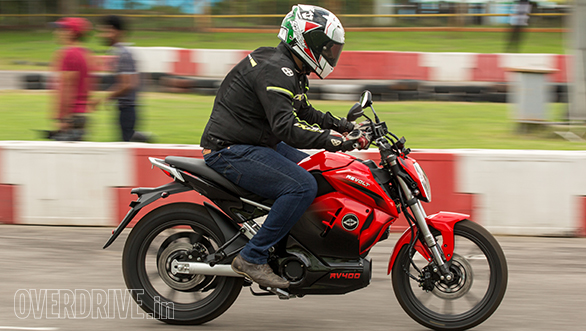 As a product and as a strategy, the Revolt RV400 is a great recipe for success and it should be interesting to see how the market reacts

More importantly, the aforementioned prices cover all costs of ownership including service, consumables and pretty much everything else. In fact, even Revolt's battery on demand service, called the Revolt Switch is free till December 31, 2019! So, on the face of it, the above mentioned charges are all you pay for three years to own the motorcycle, which isn't just innoavative but disruptive as well and certainly something a lot of manufacturers will keep a close watch on. As a product and as a strategy, the RV400 thus has potential to become successful and set precedents for manufacturers eyeing the electric motorcycle space not just with its mechanicals, but the smartphone app connectivity, charging options and infrastructure, artificial intelligence and a lot more as well.