The Tata Tiago is the new talk of the town. And as expected, most of the talk you'll hear about is how much Tata has improved from the previous car and how it could be the best Tata yet. Sure, Tata has certainly has come a long way from the legendary Indica. But is it good enough to pose a sizeable threat to its competition?

The first and most important thing about the Tiago's design is that Tata has finally let go of the Indica's design theme after a good 18 years. It bears no resemblance to that car and it's good to see Tata start with a clean sheet. 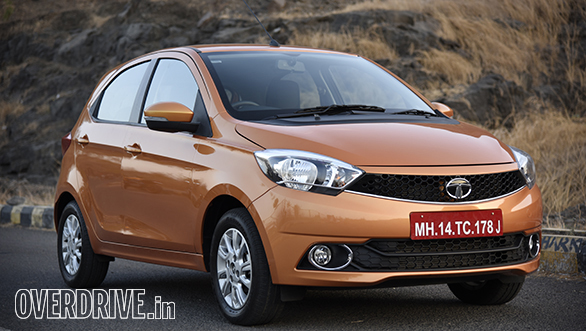 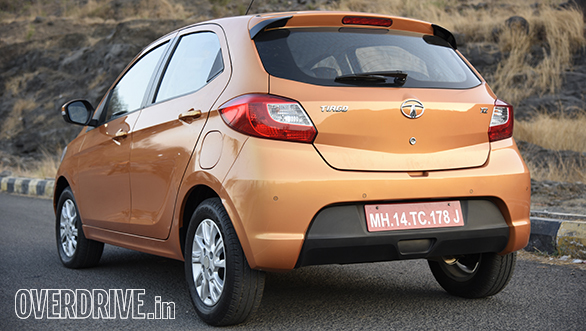 On the outside, the Tata Tiago really does look quite fetching with its strong character lines running all around the car. These, along with the slightly protruding front-end make the car appear larger than it actually is. There is also just the right amount of chrome on the outside which you'll find around the front fog lamps, along the piano black grille and inside the headlamp enclosure. 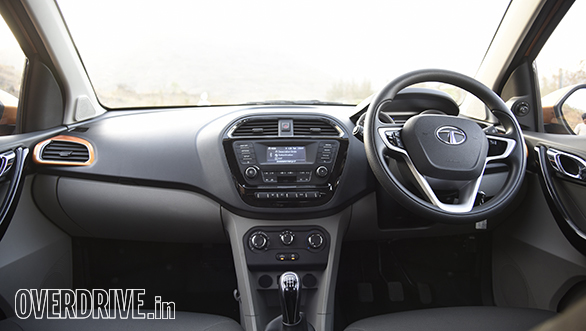 Step inside the car and you'll be quite confused, because the first thing you'll notice is this top half of the dashboard which looks quite premium with the black dashboard, good plastics and a nice Harman infotainment system. Then your eyes will move to the lower half of the dash, and that's when you'll notice the very obvious cost-cutting measures. The plastics and finish of the bottom half are so different from the top half that, it almost seems like two different cars. 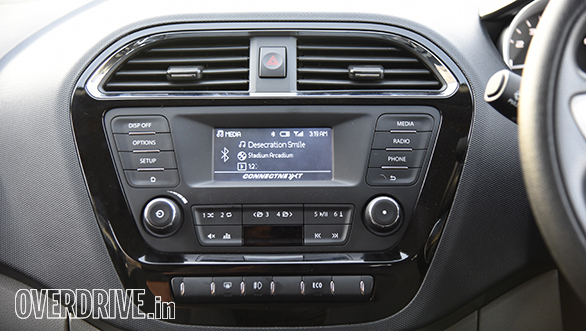 However, if you're willing to look past that, the Tiago's interior is a pretty nice place to be in. The better half of the dash is very neatly laid out with easily accessible buttons, piano black trims, chrome garnishes and a really good eight-speaker Harman system, which is easily the best in segment. The dials are very simple and easy to read, although, I do wish the plastic bezels around the cluster looked a little more upmarket. Another element, which I personally didn't like too much were the body coloured accents around the AC vents, especially in this colour. Of course, this hue of orange looks great on the outside, but it was a little too bright to fit into the sober looking interior. 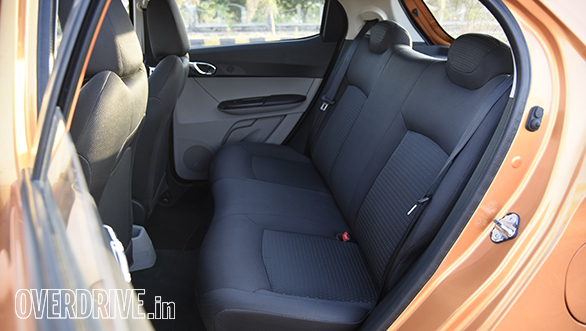 The amount of seating space meanwhile, is quite surprising. Although the Tata Tiago will ideally seat four, I managed to transport five people for around 100km with hardly any complaints. There's a fairly good amount of leg room too thanks to the 2,400mm wheelbase, while the headroom can feel a little crammed for taller passengers. The bootspace meanwhile, is quite reasonable at 242 litres, but the loading lip is a bit high and the bay is a little narrow.

The three cylinder 1.2-litre Revotron engine, which was developed just for the Tiago, puts out 85PS at 6,000rpm and 114Nm at 3,500rpm. It's quite a revvy engine and power delivery is very linear making it a very nice car to drive around town. On the highway, the car feels most comfortable at around the 120kmph mark, although I did see it eventually hit close to 150kmph. However, the engine isn't very refined and there's a fair bit of vibration that creeps into the cabin at idle. 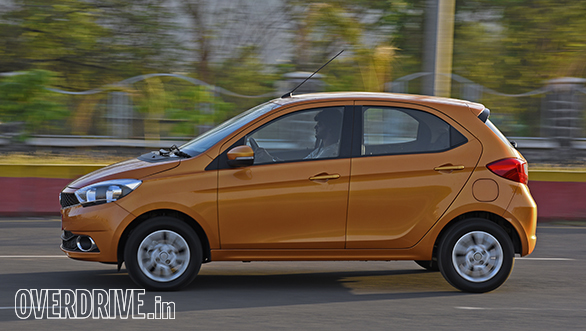 The Tata Tiago manages a 0-100kmph time of 14.5 seconds which, although isn't the best in the segment, is still quite respectable. The 5-speed gearbox meanwhile, feels quite nice to use although it could have been a bit more precise. The clutch initially felt a little too light and a bit odd because it isn't very progressive and disengages only towards the end of the pedal's travel. But that's something I got used to in no time at all. What I didn't get used to on our test car however, was the slight smell of a burning clutch that crept in during our 0-100kmph test runs. This could be due to a number of reasons which include an improperly tuned clutch, a low-grade clutch plate or even a clutch which was ruined by the previous driver of the car. We've asked Tata for another car to test, and we'll update this report as and when that happens. 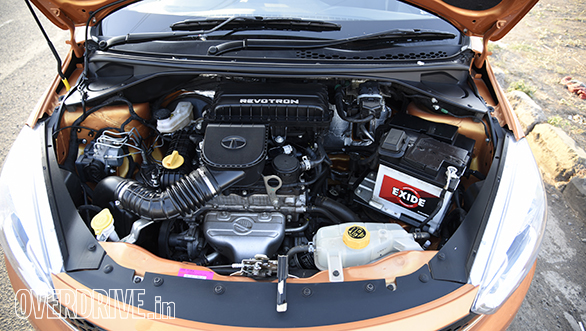 The highlight of the Tata Tiago petrol however, has to be its efficiency. It managed to return a respectable 13.8kmpl in the city with some sensible driving, while on the highway, we managed 20.58kmpl. I was quite taken aback when I drove around 200km in moderate traffic, and not a single bar on the fuel gauge dropped. And that's on City mode, the less efficient of the two available driving modes. On Eco mode, the car does seem to lose a bit of its life as the throttle sensitivity decreases and the power is limited.

I found the Tata Tiago's suspension to be set up very well for our Indian roads. The car's ride quality in the city is quite impressive as the suspension soaks up almost any rut and pot hole with no complaints at all. Now on most cars, this would make for a bouncy and unstable ride at higher speeds over undulations on the highway. But the Tiago manages to hold its own at speeds of up to 140kmph. It's not too bad around the bends either. While it isn't as steady as a car that's sprung stiffer, it certainly doesn't have an unsettling amount of body roll. 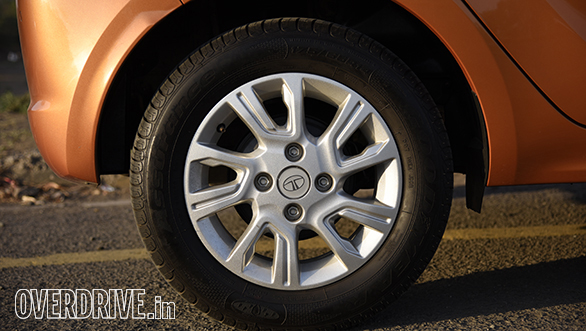 The steering however isn't the best in the market. It's an electric power assisted units, and like many other units of its kind, it feels dead and provides no feedback. At really low speeds on broken roads, the steering picks up the smallest deflections from rocks, and this isn't a very nice feeling at the hands. That said, it is still the best steering in the segment. It's quite easy to use in town, while at higher speeds, the artificial weighting kicks in and improves confidence.

The Tata Tiago is sold in five variants  XB, XE, XM, XT and the top-spec XZ. All variants are offered with body coloured bumpers, an integrated spoiler and a dual tone interior. The XZ variant is the only one to get the 14-inch alloy wheels, the 8-speaker Harman system and ABS with EBD. Although the XT variant does get the Harman infotainment unit, it gets just four speakers. On the safety front, driver and passenger airbags as well as seatbelt pre-tensioners are optional on all variants except the base XB, while the XZ gets it as standard. Another thing the XB variant loses out on is an air conditioning unit. It gets just a blower, which is rather strange in today's day and age where almost every car gets air conditioning as standard. 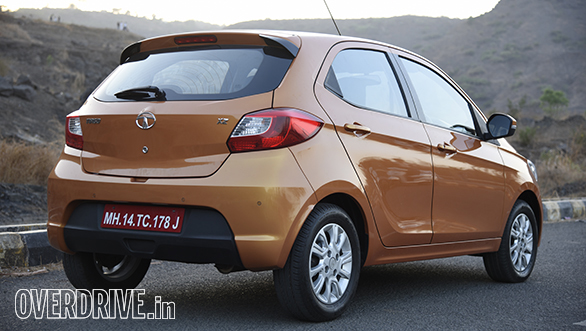 The Tata Tiago XZ petrol costs Rs 4.75 lakh (ex-Delhi), while the XT (O), which is one trim below with the optional airbags and seatbelt pre-tensioners included, costs Rs 4.38 lakh (ex-Delhi). For Rs 37,000 more, you get the eight speaker Harman system with steering mounted controls, ABS with EBD , fog lamps and a cooled glove box among a couple of other things. If your mind is made up on buying the Tiago, we suggest that you spend that extra Rs 37,000 just for the additional safety from the ABS with EBD.

Like I said, the Tiago is a clear sign of progress for Tata in terms of design and technology. One question that still remains unanswered with the Tiago is the longevity of the car. While we can't answer that right now, we'll keep you posted as soon our long-term car arrives. Until then, what is certain with the Tiago is that Tata seems to be heading in the right direction towards making a great car.