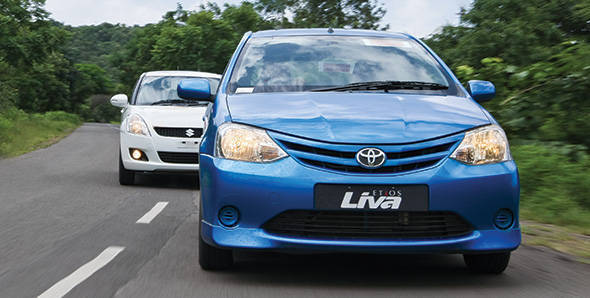 Objectivity, above all else, is the hardest part of my job. Let me put it in perspective. In my case the Swift was the first enthusiast's car I'd ever driven. The first time I'd experienced fluent steering communication on the twisties, the first time I felt the rear get loose and control it on opposite lock. The Swift diesel was my first taste of a car with a delicious kick in the power band. The list goes on but in essence, it was a car of many firsts for me and if you haven't realized yet, I should be up front. I quite like the Maruti Suzuki Swift.

It's a pure matter of opinion and it's entirely up to you to decide what looks best. Nevertheless both look good. The Swift carries over its predecessor's handsome lines with many a subtle change. The whole car has been stretched and is longer by 90 mm with a noticeably longer bonnet. The rear end gets even swoopier tail lights and the whole effect is a positive step ahead. The only downside is the exaggerated ride height; the car looks like it's on stilts. Even the 15-inch alloy-shod ZDi look inadequate.

The Liva on the other hand is quite a looker with that blue paintwork and bodykit. The stubby nose looks far better on the hatchback than the Etios. The line that runs from the headlight all the way to the tail above the door handles defines the side profile and makes for an interesting focal point. Especially as it runs into the taillight. Changes to the exterior are few and the only differences being the body coloured grille losing the chrome bar from the petrol, the lack of foglamps and 14-inch steel wheels with plastic covers instead of 15-inch alloys like on the petrol.

Put them together and it's chalk and cheese. The Swift is modern and chic in its approach with its swept back headlights, floating roof and highly styled rear end. The Liva on the other hand is an honest old school Jap design whose straightforward simplicity appeals to me. If the Swift instantly grabs your attention the Liva gradually grows on you. It's a flavour that constantly improves the longer you swill it.

Take an existing engine and knock off all the unnecessary bits or get rid of an entire cylinder altogether. That's the unspoken rule for today's manufacturers when designing engines for their smaller solutions. Toyota have gone with the first option for the Liva. It's a simple recipe. Take one four pot 1364cc D-4D engine from the Altis diesel, chop  the variable geometry turbo and replace with a more cost effective fixed geometry unit. Stir well.

The 8-valve SOHC unit produces 68PS of power at 3800 rpm and 170Nm of torque from 1800-2400rpm which looks pretty paltry on paper. But Toyota is very proud of its flat torque curve and it should be. The engine has a nice linear power delivery and a very flat torque curve which is fairly difficult to achieve with a turbocharged oil burner. What this translates into is great drivability.

Driving in start stop conditions is a breeze. Just get off the clutch and she pulls ahead cleanly. The problems only start to arise when you floor it. The engine runs out of steam as the revs rise and feels very strained at the limit. Not a car to be driven in anger then.

The figures reiterate this. The Liva is a whole two seconds slower than the Swift to the ton, taking a leisurely 17.36 seconds. Keep her in the sweet torquey zone though and the Liva makes for a friendly, easy car to drive. Efficiency is expectedly high with the Liva returning 17.88kmpl over all.

If you're in the mood for some Nicholas Cagery the Swift is the diesel car for you. The now legendary 1248cc Fiat sourced multijet diesel engine is carried over. The engine is the same 16 valve four cylinder affair that we have all grown to love over the years. Maruti claim to have made some tweaks and quote a six percent rise in efficiency. Power and torque figures though are the same 75PS at 4000rpm and 190Nm at 2000rpm.

The first Swift diesels had a spike in the delivery akin to getting punched in the kidneys by a five year old. Not hard enough to be dangerous but you damn well felt it. The new car feels toned down, smoother, kindof like a lovable jab from your girlfriend when you give her a compliment, thickly veiled in sarcasm.The Swift is an entirely different driving experience to the Liva. It's far more eager and ready for action. Lag below 2000rpm means she doesn't like getting stuck in traffic but the lovely wave of torque above it ensures she enjoys being manhandled up a winding road. Here's proof of the pudding, the Swift hits 100kmph from a standstill in just 15.15 seconds. Efficiency figures are a slightly lower at 16.68kmpl. NVH levels in the Liva are surprisingly high for a Toyota and the engine actually sounds louder in the cabin than on the outside. The Swift gets pretty vocal as well but it's more of a growl compared with the Liva's clatter. And the engine seems to get smoother as the revs rise as well. Nevertheless both cars are noisy driving environments.

The diesel engine adds a significant 60kg  to the Liva taking the kerb weight up to a total of 980kg. The biggest consequence of this is a slightly nose heavy feel and even more roll than the petrol. The steering retains the direct feel that lets you plant the car exactly where you like. However there are moments of inconsistency where you feel like the feedback has reduced through some corners but it makes a quick return. Throw her into a corner and she leans over significantly, but grip is plenty. Once used to the feeling you can drive through the rolling motion. Passengers will not be pleased mind you.

Low speed comfort is what we've gotten used to with all Toyotas and is very good. The softly sprung nature really shines here. The Liva handles all but the most evil of potholes with a muffled thump and isolates most of the impact from the occupants. However as the speeds increase she does start getting slightly skittish on bad roads and the damping just can't keep up with continuous bad roads.

We've harped on enough about the Swift's handling pedigree so I won't go very far into the details. In essence the Swift is stiffly sprung. There's some new found suppleness to it but it's nowhere as soft as the Liva. While this means she's slightly less comfortable than the Liva it also means she's a far more capable handler. The ride improves as speeds go up and the Swift is far more adept at handling high speed bumps without getting unsettled. There's still body roll around corners but the car remains fairly flat and grips through corners beautifully thanks to the excellent new MRF rubber. Couple that with wonderfully direct and talkative steering and you have an honestly enjoyable car to drive. Both cars shed speed with confidence. The Swift stoppers feel sharper, more potent but the figures say otherwise. In our tests the Liva came to a standstill from 100kmph in just 42.52 meters in 3.05 seconds while the Swift took a considerably longer 50.66 meters and 3.58 seconds.

The GD model is the sole Liva diesel variant currently and is priced at Rs 5.85 (ex-Delhi) including the optional safety package that adds a pair of airbags and a driver seatbelt warning system to the standard ABS. Now that puts it bang in between the Swift VDi and ZDi (at Rs 5.61 lakh and Rs 6.38 lakh ex showroom Delhi respectively). In terms of kit, the Liva takes the Etios' cabin to new levels of sparseness. What you get is an aircon, power windows, and a cooled glovebox but that's about it. There's no audio system in either but the Swift cabin is much more pleasing to look at. The centre console is miles ahead with a rev counter and a trip computer that gives you info like real time fuel consumption, distance to empty, and more.

It's the small things like the lane change indicator, auto down driver's window, headlight on warning system, etc make the Swift so much more likeable. There are small irritants however like the unnecessarily bright high beam indicator in the centre console that constantly distracts. But then again that may just be Maruti's way of telling you not to be an inconsiderate arse at night. The one (big) downside however is that you cannot get ABS or airbags in the Swift unless you go for the top of the line ZDi

The Liva's biggest advantages are its low speed ride quality and comfort. And that amazingly spacious cabin (a near flat floor and best rear knee room in the class). The Swift concedes in these two major areas but makes up for it with a better engine, better dynamics, better looking/feeling interiors and an overall better driving experience.

The Swift VDi costs slightly more than the Liva GD but doesn't offer ABS or airbags even as an option. Nevertheless, all said and done, the Swift emerges as the better car. It's a better engineered product that will serve your purpose while putting a smile on your face. And that's the objective truth.