The Suzuki GSX-R1000 is the pinnacle of Suzuki's performance motorcycles. But let's be honest, Suzuki have been tardy about updating it in the recent past. The last full model change was 2009! That's, wow, I think they made motorcycles in black and white back then! But let's sweep all that under the table, because the 2017 Suzuki GSX-R1000 is all-new. Almost every single part you touch, feel or use without seeing is new and it's the motorcycle that is expected to take the fight to the other litre-four sportsbikes. The Kawasaki ZX-10R and RR have been updated this year. The Honda Fireblade and its SP version are brand new as well. Yamaha are currently content to update their other-worldly YZF-R1 and R1M. Of course, there is the matter of the altogether very different Ducati Panigale - new V4 sportsbike is coming soon. The Aprilia RSV4 which received minor, but reportedly effective updates this year too. Like all of the top sportsbike today, the GSX-R has also evolved into a multi-motorcycle range. The base model is the Rs 19 lakh (ex-showroom) Suzuki GSX-R1000A and the top model is the Rs 22 lakh (ex-showroom) Suzuki GSX-R1000R! So what's new? 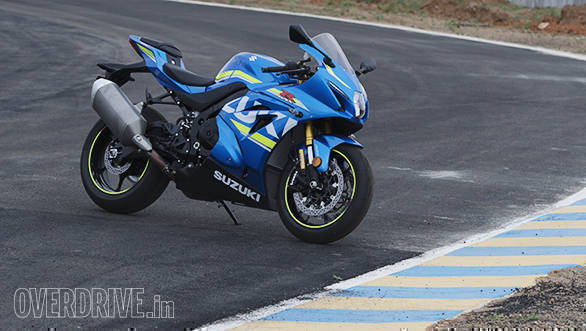 While we do have a detailed article on the technical details of the new Suzuki GSX-R1000, here's a quick summary. The 999.8cc engine is all-new featuring lighter, bigger pistons, bigger valves and smaller changes to make the engine more compact. Suzuki adds their MotoGP-based (switches post 10,000rpm, approximately) variable valve timing system that allows the 202PS engine to offer serious mid-range torque also. 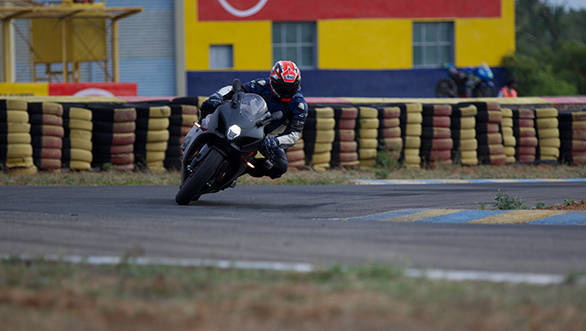 The black bike in this story is the 2017 Suzuki GSX-R1000A model, priced at Rs 19 lakh ex-showroom (India). The big difference to the R model is the suspension specification and the standard bi-directional quick shifter on the R

This engine is hung off a lighter, narrower new twin-spar frame that sits on a slightly longer wheelbase. But Suzuki has managed to increase the length of the double-braced swingarm while reducing the front axle-engine distance for more feel and more mechanical traction. Also new are 10mm larger Brembo brakes with monobloc calipers. ABS is standard and so is cornering ABS. 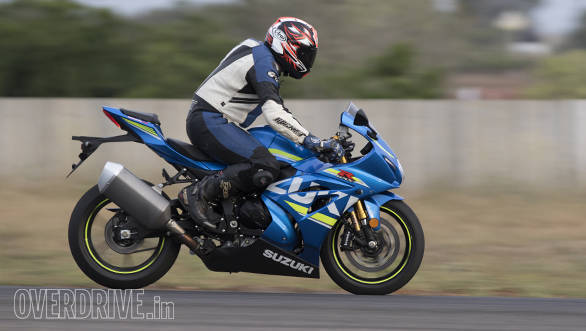 While the 2017 Suzuki GSX-R1000R and the A model cannot be faulted in terms of the feel and power of the 320mm Brembo rotors and monobloc callipers, the rubber hoses bring fade

Showa supplies fully adjustable suspension for both the GSX-R1000 models but the R gets the top of the line Balance Free units front and rear. Finally, the IMU-equipped Suzuki has a 10-step traction control system, launch control (R only) and riding modes. But when you're braking from 215-230kmph (not sure, I wasn't looking) all this spec sheet-ing doesn't work. You're looking for the turn-in point, bracing against the incredible force that modern brakes generate at will... it's a busy moment. Except that the only obvious flaw in the Suzuki GSX-R1000 are the rubber hoses because mysteriously enough, the Japanese boffins have decided that a streetbike doesn't need braided hoses. The fear in my heart and the sweat on brow combines with the fact that the brake lever is all the way in says otherwise. 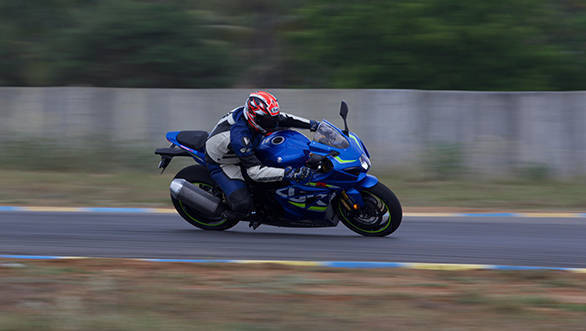 I pump the brakes once and the pressure comes back. Then you cannot fault the new 320mm Brembo rotors and monobloc callipers. The bite is sweet without lacking power, brake force builds rapidly and while these aren't quite two finger brakes as stock, that's just a braided hose away, honest. The base bike has ABS and both bikes get the Suzuki Motion Track Braking system - which means they can sense the trajectory and lean angle and work how out to maximise braking while keeping line and preventing a fall.

But the moment passes and you shortly realise just how easy a litre-class sportsbike the GSX-R1000 is. It's a busy ride but not frantic. Turn is beautiful and both the bikes, the A and the R tip into turns naturally, not too quick but without any latency.  The R's Balance Free Showa magic makes itself felt loud and clear. Your sense of the contact patch at the front as well as rear is stronger and clearer on the R and that should, to a serious track rider, be worth its weight in gold. On a bumpy track like this one, it also makes the A feel considerably more unsettled than the R. Albeit, I have to add that both the Suzukis wear excellent suspension. It never felt stiff and unabsorbent like a sportsbike is expected to. That makes either A or R a huge promissory note for a great street and highway ride experience though the latter will outperform the former to be sure. 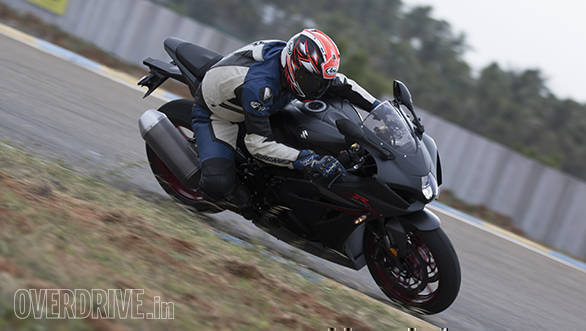 The 2017 Suzuki GSX-R1000A and the GSX-R1000R models only differ in three areas. The R gets higher specification of suspension, a standard quick shifter and LED running lights.

What I loved about the Gixxer, more for the R and only a bit less for the A, is that they felt grippy, stable and secure. Kari Motor Speedway isn't the friendliest of tracks and the Suzuki, technically a large motorcycle by class, should be hard work. And I did sweat from the sheer physicality of riding a 202PS machine around this slow, tight circuit. But the fact is that it feels more like a friendly argument than a war you're fighting with the machine. 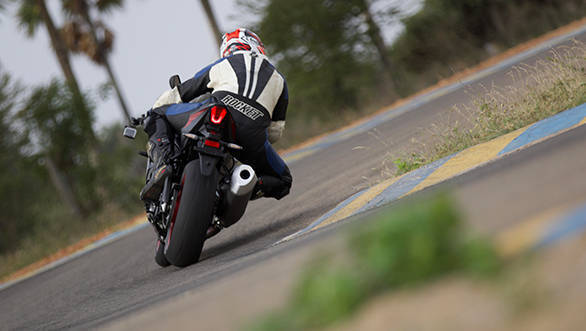 The 2017 Suzuki GSX-R1000 is equipped with an IMU and while the traction control light was on almost constantly on my laps, I never, ever felt its intervention which is how, in my opinion, chassis electronics should work

On the corner exits, you do need the electronics on your side. We were riding in the top A riding mode with traction control at 5, roughly halfway, where 1 is the most permissive. I noticed that the low gears (first and second for the chicanes) meant my corner exits were marked by the flashing yellow TC light on the dash. But holy bow wow, I never ever felt the intervention as a cut in power or a change in the engine note. That is seriously impressive.  So you can essentially trust this wonderful Suzuki to handle its end of the task as you flick-flack way through the chicane in first or second gear without any snatches or jerks to trip you up. That is smooth. Very, very smooth.

So good is the traction control system, in fact, that the Suzuki don't actually have engine brake control (to control how much chassis attitude is affected by a closed throttle) or wheelie control (because the IMU understands and traction control solves wheelies). Yeah, blah, blah, blah, I thought.  But it's true. The last complex of corners at Kari Motor Speedway are totally ruined in surface right now and that means you have to pussy-foot through it. Which in turn turns a second or third gear exit on to the main straight into a high revs in first sort of exit. So as you come back hard on the gas and immediately the 202PS make the front go light. On the A, this happens multiple times in each gear. And you will notice the extra force that comes sometime after 10,000rpm when the Suzuki Racing Variable Valve Timing system turns on the fireworks show. Another little wheelie if you find a crest. Each time, the traction control eases the front back down. The R feels calmer because the suspension absorbs the change in chassis pitch slightly better than the A's Showa units. 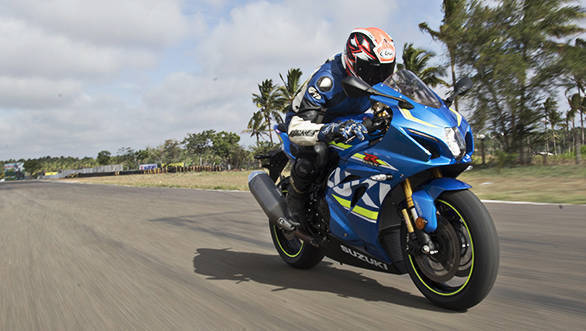 On the move, the The 2017 Suzuki GSX-R1000R feels smooth and easy and the power builds up nicely before you feel a small step up in ferocity past 10,000rpm

So fast is the Suzuki that it absolutely tears down the straight screaming in fury and happiness while the digital speedo shows ever larger numbers which a near-unreadable urgency.
Oh I could go on and on. But the fact is the Suzuki has gone and made a tremendous little GSX-R1000. Yes, little. The new motorcycle looks and feel tiny and it really does beggar belief that a package this small packs over 200PS and so much technology. But at the end of the day, it works. You keep thinking that the weight, performance, intent and size should produce more drama. But the Suzuki is on point about what it intends to do - and that is produce a calm, even soothing, but fast-fast-fast motorcycle that allows you ride it as hard as you like. Indeed, one journalist remarked, "I stuck to third gear for more or less the whole lap and it worked very nicely!" That, my friends, is a flexible, friendly motor. 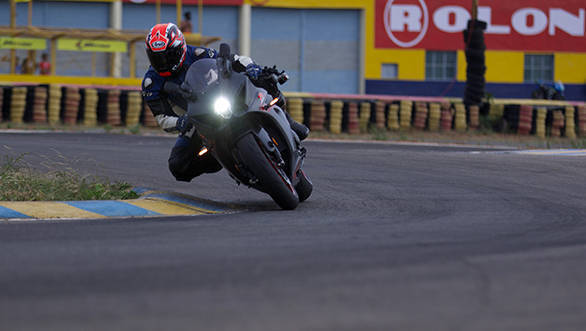 In sum, the Suzuki GSX-R1000 is a return to form for the little Japanese motorcycle maker. My quick turn at the track says it's fast, deadly accurate, very slick and the electronics are nearly invisible. But riding it slower and watching the suspension do its thing shows it's a flexible engine with great grunt, not just a fierce top-end and the suspension isn't rock hard track only either. That's a huge promise for riding around in the countryside. The best bit is that when I climbed off after each of the two stints, my wrists weren't hurting - the ergonomics allow you to sit comfortably. You will need core and leg strength as sportsbikes tend to demand but it won't kill your wrists. Well, at least not immediately.

The 2017 Suzuki GSX-R1000A, the base model, is priced at ?19 lakh ex-showroom and it's a solid entry into the sportsbike space. The Kawasaki ZX-10R, the 2015 model was similarly street-friendly and track-fierce but the subsequent models have focussed on Tom Sykes a little too much and not regular use patterns. And that's where the GSX-R1000 will fit it. A sleek, small, comfortable, fast litre-four sportsbike.

If you have the money and do trackdays, do consider spending the additional ?3 lakh on the Suzuki GSX-R1000R model, though. The quickshifter works well though downshifts could feel more positive. The Showa Balance Free suspension is really a dramatic upgrade on the excellent Big Piston stuff on the A model and it makes the R more settled, more versatile in the Indian context, and more fearsome at the track. It's the motorcycle I would pick in the litre-class sportsbike space right now.

Image gallery of the new Suzuki GSX-R1000 and R