I have never been a fan of choppers. I've found them to be a completely pointless exercise. For me, form always comes as a result of function. Hence, the obsession with café racers, street trackers and other purpose-built machinery. But every once in a while a motorcycle comes along that you just have to appreciate even if you're not a fan and even if it is solely the aesthetics. The Vardenchi Valoroso is one such motorcycle.

Whether you're a fan of the chopper culture or not, this is one motorcycle that you just have to look at and admire for a few minutes at least. And if you're the type who has a slight bend towards the two -wheeled kind, you'll want to have a closer look. And it is this closer look that will reveal how much attention has gone into the minor details on this motorcycle. For example, you will not notice the carbon fiber finish on the tank and fenders unless you take a closer look. You might even miss that the little stalk that the mirror is mounted on at the end of the handlebar is actually the turn indicator. 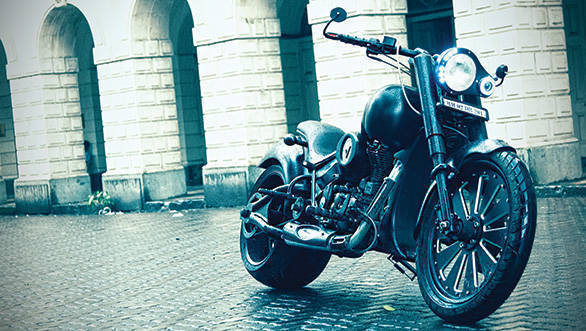 The Valoroso is powered by a fuel-injected, twin-spark, 500cc Royal Enfield motor

The Valoroso is powered by a fuel-injected, twin-spark, 500cc Royal Enfield motor and uses a Royal Enfield frame as well - at least the front half of it. The motor, frame and brakes are the only things that come off an RE though. Even the rear half of the frame has been modified extensively to accommodate the 300 section rear tyre and the custom fabricated tubular swingarm. That's right, this bike uses a 300 section rear tyre. Just big enough to give some lorries a serious inferiority complex.

The front end is all custom made with projector headlamps, LED's et al. Being a chopper, extreme rake angles are a must. But thankfully the Valoroso is not as extreme as some of the other jobs we've seen. The wide handlebar is mounted on a custom-made riser that features a very nice brushed edge. This brushed finish can be seen on the wheels as well and adds a nice visual bonus to the otherwise completely black motorcycle.

Personally, I feel the best angle to view the bike from is the rear. My favourite bit is the tail light that has been integrated into the rear fender and looks like it came straight out of the Knight Rider. 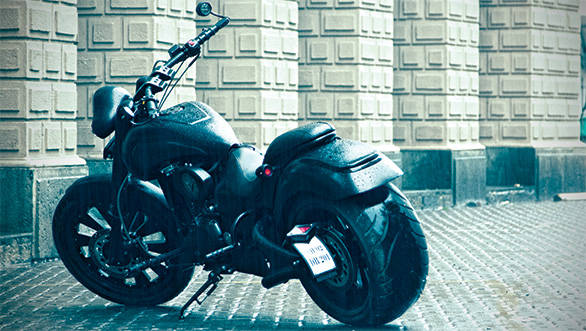 Best angle to view the bike from is the rear

The finish levels on the bike are among the best that we have seen on custom-made numbers. All the materials seem to be of good quality and even the matte black paint seems flawless. Everything used on the bike, in fact,  is pretty much premium. For example, the brake lines are all braided steel. The tyres are from Avon. The Vardenchi monogram on the fuel filler cap is laser etched. It all screams top notch. 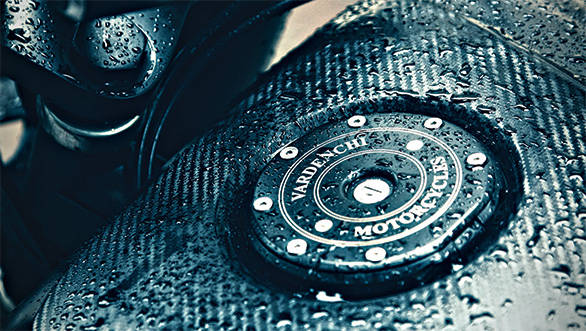 The Vardenchi monogram on the fuel filler cap is laser-etched

That being said, the Valoroso is not the easiest bike to ride. The downside to that massive rear tyre is that cornering ability and agility is compromised. So this is not one for the twisties. And it is not a motorcycle that likes tight spaces either. So you can pretty much forget about riding it in rush hour. This is a motorcycle you ride to the nightclub and park it outside so everyone can gawk at the beautiful metalwork that has gone into it. But, all that metalwork does make it a heavy motorcycle to wheel around. And if you have to walk it anywhere, well, I suggest you don't. It would be much easier to thumb that starter and ride it wherever you want it to go. And when you do start her up, you'd be surprised. Because this one while loud, will not make your neighbours hate you. It will simply tell them that you have arrived in a very authoritative voice. 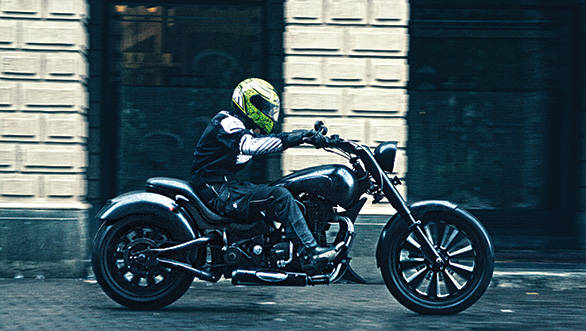 And a statement is exactly what this motorcycle is. It simply says that you like motorcycles but wouldn't want something that comes off an assembly line. Just Google Vardenchi. You'd be surprised at what you will find. Mostly raked-out choppers. But then you might even chance upon a cafe racer and a motorcycle that looks a lot like the one Nicholas Cage rode as a skull on fire in the Hollywood movie, Ghost Rider.