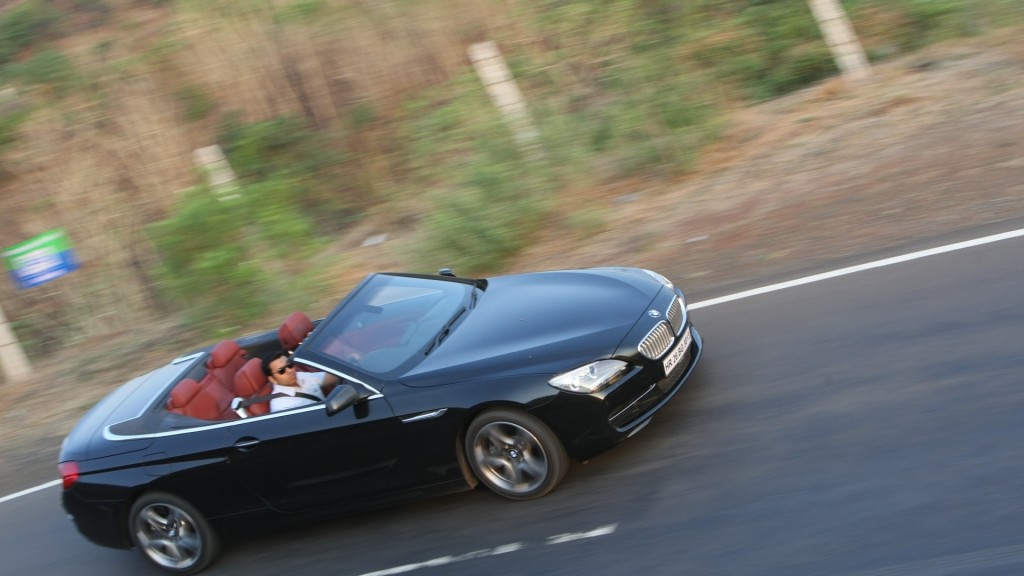 Zen And The Art Of Motorcycle Maintenance is a fantastic novel. This Robert M Pirsig masterpiece is the reason why, like many others, I have embraced motorcycling as a way of life. For those who've read the book the reasons are obvious - among other things the author says cars are a cage that move your body while failing to move your soul. He says looking out of a car is like watching the scenery go by on television. That cars fail to invoke the sense of freedom and the oneness with nature's elements as you drive along.

I agreed completely, until now. Until I stepped into this beast of a car, which has rewritten every feeling, every emotion, everything I had in my head about cars. Pirsig, evidently, never experienced the thrill of belting round twisties in a convertible. Had he, he'd never have bothered with the book at all. I could ramble forever about the joy of driving a convertible but it's something best experienced first hand. I feel the rush of the wind in your hair as the speedo swings east and determinedly inches south. The noise, the wind, the whole experience is something that, even in our business, is a rarity.

Coincidentally, the last time I drove a convertible was the outgoing 6 Series so it's a sweet homecoming for me. There is no better way to experience the cutting edge that European car makers operate at than by sampling their flagship GT cars. This is where they apply all their engineering nous to ensure the flagship reflects the ethos of the brand.

So let's start with the basics. The platform is the highly versatile L6 that debuted on the 7 Series and since then has seen duty on the 5 Series, 5 GT and even the baby Rolls, the Ghost. Evidently a very sophisticated platform which also gets Active Steering (Rs 2.25 lakh option on the 6) and is bound to raise the bar with regard to dynamics by a couple of notches. It sits 5mm lower, 39mm wider and 74mm longer than its predecessor. The major part of that increase is in the wheelbase (75mm longer) which goes into liberating more space inside the cabin. However, don't call on your mates for a ride just yet. The rear seats are still tight (though not as ridiculously tight as the earlier car) and cannot accommodate anyone more than four feet tall and thicker than a matchstick.

BMW has gone all out in using lightweight materials on the new 6. The bonnet, doors and the front suspension mounts are all made from aluminium while the boot, roof storage cover and the front quarter panels are all made of a glass fibre composite material to keep the weight down. Despite all this though the weight has gone up by 113kg to a distinctly heavy 2390kg. The roof remains a canvas job; a folding hard top like on the Z4 would have added too much weight while robbing the boot of space.

In keeping with BMW's new design language under Adrian van Hooydonk, the styling of the 6 Series has been completely revamped and that brings us to one of the biggest debates in the automotive world, BMW's new design philosophy. I for one am a fan of the Bangle BMWs in general and the outgoing 6 Series in particular, the weirdness (of which there was plenty) only added to the appeal of the car in my eyes. It also merits mention that the old 6 was penned by Hooydonk, then working under design head Chris Bangle, but if you're looking for much in common between the two 6s you'll be hunting for a long time.

Flame surfacing has gone, the Bangle butt has gone and the lines are cleaner, crisper and less fussy. The biggest change is the prominent, thrusting kidney grille which earlier looked more like an afterthought. Like the 7 Series and 5 Series, the car has been visually stretched (in the horizontal plane) and lowered while the flanks are tightly pinched and sharply creased, details that add to the sleekness of the car. Unlike the 7 and 5, the headlamp eyebrows don't stake centre-stage; instead it's back to the menacing twin corona rings which give it a properly sinister appeal when the sun goes down. That's what BMWs do, intimidate other road users, and this one does it properly, particularly in this shade of black.

The most remarkable departure from the last car is at the rear which flows and blends with the rest of the car and looks normal. No longer do BMWs polarise opinion and ask questions about the designer's drinking habits  this is a properly desirable car in a normal, properly desirable sort of way. And with the top down she's thoroughly wow-inducing. The soft-top with its flared C-pillars is one of the few major carry-over items and takes 29 seconds to fully retract and can be activated at speeds of up to 40kmph. There's also a receding glass rear window which cuts wind turbulence in the cabin.

The cabin is particularly special  as it should be for a car that demands to be driven with the roof stowed away. There is quality and then there is quality and the quality on the 6 Series is nothing less than exemplary. This is a flagship GT and it shows. The two-tone black and red leather with red stitching looks sensational (leather finish on the instrument panel is a Rs 2 lakh option while contrast stitching is Rs 30,000) and the red leather seats scream for attention. Every knob, dial and switch is crafted to the highest standards and no matter where and what you touch, you feel the value of this car. The leathers are also of a particularly hard-wearing material to handle lots of exposure to the sun and other elements. It is of course a familiar place to be in (if you've been intimate with a 7 or 5 Series) but we're not complaining, especially since our car gets the ceramics package (a Rs 1 lakh option) which sees all iDrive controller and other knobs kitted out in a black chrome sort of material that looks and feels lavish. The only piece we felt looked incongruous was the iDrive screen sticking out in the middle of the dash almost like an afterthought though BMW designers claim it was deliberate, inspired by a flat-screen TV. The screen is a smaller 7-inch affair, not the larger 10.2-inch display but for Rs 2.9 lakh integrated navigation can be specified. Head up display is a further Rs 1.6 lakh while night vision is Rs 2.8 lakh.

If space is a concern for those at the back, it definitely isn't for the ones lucky enough to be in the front. There's ample room to move around, the seats are low, delivering a very sporty driving position, are amazingly comfortable and sportily supportive and the optional coolers and butt massagers are brilliant. Of course the heated, cooled and massaged seats aren't cheap  the comfort package option costing Rs 5.5 lakh.

The crowning achievement of the car though is the engine under the hood. It's still a V8 petrol but has been downsized to 4.4 litres. But with petrol direct injection, light-weight aluminium construction and a turbocharger for each bank of cylinders, there's more horsepower to play with, 400PS (up from 360PS) available low down in the rev range from 5000 to 6400rpm and more torque, 610Nm (up from 488Nm) twisting up from 1750rpm all the way to 4500rpm. That's a seriously astonishing number that shames even diesel engines. The better diesel engines these days make 500Nm and we call them torque monsters. This is unbelievable, and as you can imagine makes any drive in the 650i thoroughly memorable.

Let's start by motoring at a sedate pace, top down, wind in your hair. The exhaust emanates a nice throaty burble, never intrusive, always pleasing. The 8-speed gearbox eases its way to the top ratios, the engine feels extremely relaxed and you'll struggle to imagine better ways to spend the day. Breathe on the throttle and without any effort, without any sense of turbo lag, the 6 builds up speed. Look down and you realise, it's serious speed on the clock.

Then you get into the mood. Mash the throttle and the 6 rears its head. The gearbox barrels down a couple of gears, the turbos gulp in the clouds, the exhaust note hardens and before you know it you've overtaken the horizon. Seriously quick would be an understatement  on our acceleration runs with all the electronic nannies switched off, the 6 spun its rear tyres all the way in first and almost the entire way in second gear, requiring a constant half turn of opposite lock to keep her pointing straight. And we're talking 275/35 19-inch sticky tyres. Of course that didn't deliver the fastest acceleration time. On less loony runs the 650i thundered to 100kmph in 5.43 seconds, 200kmph in 19.73 seconds and the electronic speed limiter chimed in at 250kmph. This is a seriously quick car but one which requires no effort when pottering at a leisurely pace.

Like the 7 Series, the 6 too gets Dynamic Drive with damper control (Rs 5 lakh option) which switches the chassis from comfort to sport mode, hardening, sharpening and quickening throttle responses, gearbox shift patterns, chassis compliance, engine responsiveness and progressively reducing the level of electronic interference till in Sport+ mode the car allows some heroic slides till ESP cuts in when it senses the driver is running out of talent. The electronics can be switched off entirely, allowing loony tyre-shredding slides provided you have the talent. And of course grip, in any of the modes, is plentiful and tenacious.

But all this is a given in a BMW. What came as a surprise were the comfort levels. This is a luxurious GT car and it does luxurious grand touring rather well, far better than what the 35-profile 19-inch runflats would have you believe. Sure, there is a certain firmness to the suspension; there has to be to maintain a semblance of sportiness, but it's not so stiff as to shake your fillings loose or for mid corner bumps to kick the car off the mountain. And if you want an even more comfortable ride, 18-inch wheels with higher profile tyres are a no-cost option.

At the end of the day though the 6 Series, or any convertible for that matter, is about posing and the 6 ticks all the boxes. When the wraps were taken off the car, on the banks of the Pichola Lake in Udaipur, surrounded by a bevy of models, the entire Indian automotive community took notice. I put down my copy of 'Zen And The Art Of Motorcycle Maintenance' and pondered for a while. Even though it is a lovely car, the question that begs asking is whether India is ready for convertibles. Do we have the weather? Or the roads? For all the joy that I had in the 6 Series, I'm now two shades darker, had a mild bout of sunstroke, was felt up by street kids at almost every traffic light, was blinded by dust going into my contacts, had buckets of black soot dumped into my face while passing trucks and drove in constant fear of a streak of red paan juice streaking out of the window of a state transport bus. And Rs 95 lakh (ex-showroom in Delhi, not counting the options) is a lot of money to pay to be spat on.