Starting the new year on a note of hope, we have an in-depth look at the problem of air pollution in our country, and what change we can expect to see with the implementation of BSVI norms. Of course, an exhaustive list of every single new car and motorcycle heading to a showroom near you could fire up your hopes in other ways! 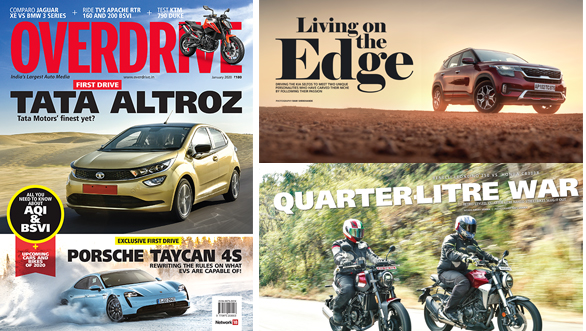 We also have an India exclusive first drive review of the most accessible all-electric Taycan from Porsche, the 4S. And we've driven, and drifted it, in the most hostile, icy conditions one can imagine. On the other end of the spectrum, we've driven Tata's best car yet, the Altroz hatch in the deserts of Rajasthan.

And with 2020 shaping up to be the year of EVs, we've got a drive report of the MG ZS EV, and how it fares in Delhi traffic and on the highway. All the details on the new Tata Nexon EV and Hyundai Aura, two sub-4m cars in very different segments, are in the issue as well.

As for detailed comparisons, we've pit the sportiest luxury sedans money can buy against each other - the refreshed Jaguar XE and the BMW 3 Series, for the title of 'Best Driver's Car'. On two wheels, it's the Benelli Leoncino 250 against the Honda CB300R. We also have a road test of the KTM 790 Duke, including the all-important performance and fuel efficiency figures, apart from ride impressions of the BSVI-compliant Honda Activa 125.

In our Motorsport section, we look into the phenomenon of Marc Marquez's career so far, we speak to India's top rally driver, Gaurav Gill, on moving onwards and upwards, as well a roundup of the action from the debut season of the X1Racing League