The 2018 edition of the Volkswagen Ameo Cup began in earnest on Saturday, June 23, with the first race at the Kari Motor Speedway in Coimbatore. The race saw 19 cars take to the grid, including two women drivers and an international entrant from Bangladesh. 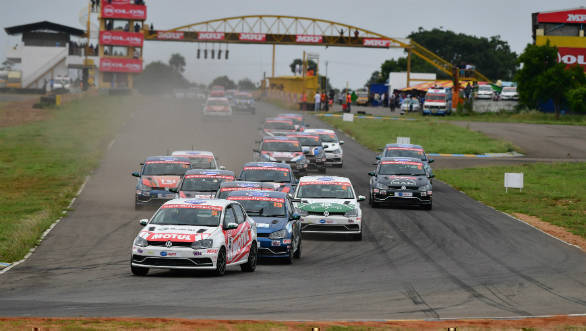 Jeet Jhabakh leading the pack on the first corner

The 15-lap race was won by Dhruv Mohite from Kolhapur. Second-placed Jeet Jhabakh got the initial lead by way of him being on the faster side of the track. But a fightback from Dhruv saw him regain the lead on lap 5. He maintained the lead from then onwards, right up to the end. 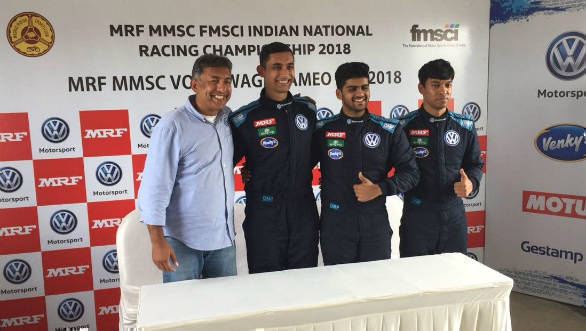 Head of Volkswagen Motorsport India with Jeet, Dhruv and Saurav

Saurav Bandyopadhyay from Thane finished third. He had initially lost his place at the beginning to Pratik Sonawane. Saurav managed to counter Pratik's better with a gritty fightback and regained the last podium place on lap 9. The technical, narrow circuit also caught out a few of the newer entrants, with them suffering punctures. Dhruv, however, used his previous experience in karting and Formula BMW to hold on to his winning position. 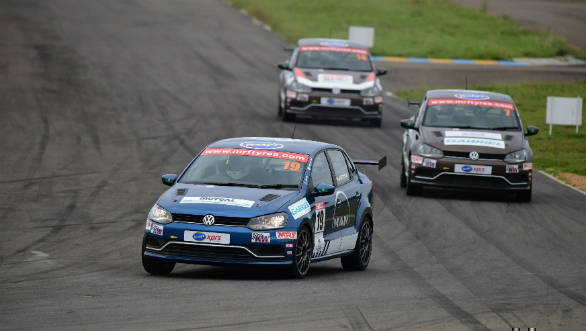 The 2018 Ameo Cup cars haven't seen drastic changes over last year. The only difference is new damping settings and new tyres developed in conjunction with MRF. Driver found the car to be accessible, which reflects the qualifying timings between 18 drivers being under 4 seconds. As stated, the qualifying positions and eventual finishing positions of the top 3 drivers remained unchanged.