Round 1 of the 2017 JK Tyre FMSCI National Racing Championship continued at the Kari Motor Speedway today. It was an exciting fight in the Euro JK 17 championship, the premier class of the series, with Vishnu Prasad dominating the category, having already won yesterday's opening race. In Race 2, Vishnu started the race in sixth position, behind rivals Nayan Chatterjee and Anindith Reddy, who were fifth and fourth respectively. It was Vikash Anand who started on pole. As soon as the red lights went out and the race was underway, Vishnu was determined to close the gap as well as make his way past the racers in front of him. After a close chase, he did get past Vikash and then maintained his lead over the pack, eventually taking the win. 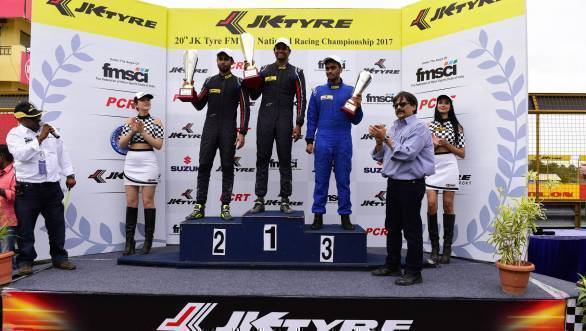 Podium for Race 3 of the Euro 17 series: Race winner Vishnu Prasad on the top step of the podium, flanked by Anindith Reddy in second place and Nayan Chatterjee in third place.

This paid off in the second Euro JK 17 race, wherein he started from pole. Vishnu was on the throttle and calmly maintained his position when the race began. He also happened to clock the fastest lap of 1min 01.246sec, bettering Anindith Reddy's lap times at the track. Anindith too didn't give up and put up a fight to finally settle for the second position. And following him was Nayan Chatterjee who made it to the third place on the podium on the podium. 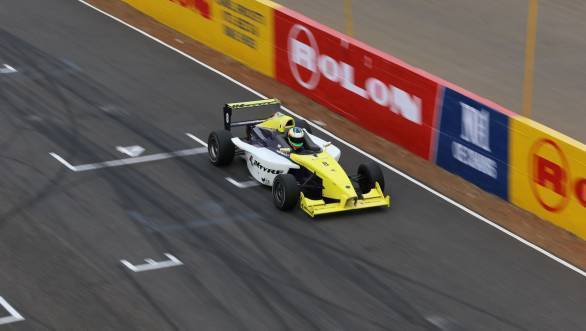 Vishnu Prasad dominated the Euro 17 class at the opening round of the2017 JK Tyre FMSCI NRC, taking three wins of three races

The focus had been on Prasad earlier in the day too, with the driver also competing in the Formula LGB4 races. The race started with Vishnu and Chittesh locking horns for the race lead, aggressively battling each other. There was also an unfortunate collision elsewhere, which led to a restart of the race. In addition, Yash Aradhya's car flipped, which led to a second restart. While Vishnu and Chittesh were involved in a battle to win the top spot, Chennai-based Saran Vikram managed to get quite close the two racers ahead of him. However it all ended with Chittesh crossing the chequered flag first, Vishnu second, and Saran in third. For the second LGB4 race of the day, all three drivers making it to the podium in the exact same order. 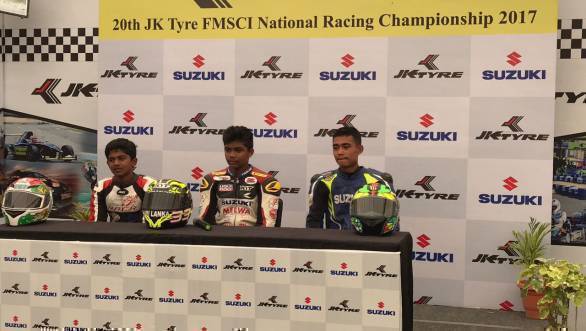 There was action aplenty in the two-wheeler races too. The 15-year old Sri Lankan racer, Jaden Gunawardena, who won the Red Bull Road to Rookie Cup race on Day 1, continued his winning streak on Day 2 as well. Yesterday's podium finishers, Lalhruaizela and Lalnunsanga faced heat from the Chennai-based Varoon S, who finally finished second on the podium. Lalhruaizela finished third while Lalnunsanga was pushed to fourth. 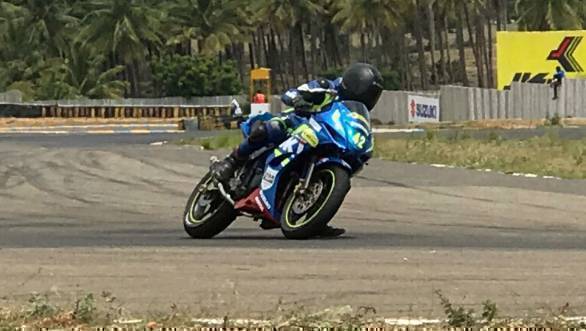 In the Suzuki Gixxer Cup, Joseph Mathew continued to win on Day 2 as well. Lalmawipuia finished third on the podium. While Sanjeev Mhatre was second yesterday, it was Malsawmdawngliana who took the second position on the podium today.