Lexus has now released a teaser video of the facelifted Lexus ES sedan before its international debut at the Beijing auto show on April 25. This comes after the spy images revealed changes to the car's face.
Most prominently, the spindle grille now has vertical slats replacing the earlier horizontal ones while also being more pronounced, following the design of the flagship LS sedan. The front headlights have been slightly reworked with new LED elements while the lower portion of the more sculpted bumper now has chrome inserts for the fog lamp housings and around the new grille. The interiors will most likely be tweaked slightly with the most prominent addition being the updated Lexus infotainment system, as seen on the LS and NX cars. The rear of the car is sharper as well with new three-dimensional LED tail lamp, a prominent spoiler on the boot lid and a more sculpted rear bumper. 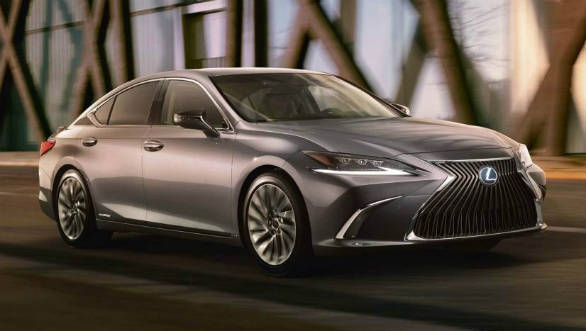 The car won't see any mechanical changes and will continue to be based on Toyota's global TNGA platform, which the ES shares with the Camry. The engine options will be carried over unchanged which means a 2.5 litre four cylinder petrol mated to an electric motor providing a combined output of 205PS and 213Nm. This will be mated to a 5-speed CVT.

In India the ES competes with the Mercedes Benz E-class, BMW 5-Series, Audi A6 and Jaguar XF but being a CBU is priced slightly higher at Rs 55.27 lakh (ex-showroom Delhi). Lexus has recently completed a year of operations in India and will be hoping this new car makes it more visible in the Indian market.

See the teaser video below: