The Volvo XC40 has been my automotive unobtanium. It debuted in India around the same time I found myself in this job and has been in OVERDRIVE' hands a fair few times since. In all this time I've been edging to have a go at it, and as luck would have it, haven't been too successful. 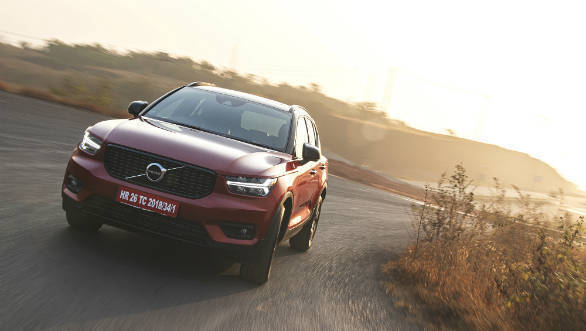 It's just another small luxury SUV you may say. But I've always felt that maybe this one was a bit different, maybe it was doing somethings the others weren't. Everyone else who's driven it around me seems to say this too. The first-ever premium-segment ICOTY award also says this. So when I got assigned to this story, I was more than happy to oblige.
This opportunity comes in the shape of the Volvo XC40 T4 petrol. This is the first SUV in Volvo Cars India line-up that is BSVI compliant and its first purely petrol motor in this generation of cars. The XC40's diesel version has now been discontinued, although the brand promises that BSVI diesel engines will be available on its larger SUVs for the time being. The company has decided to move away from diesel globally, and no new engines will be developed after this generation. 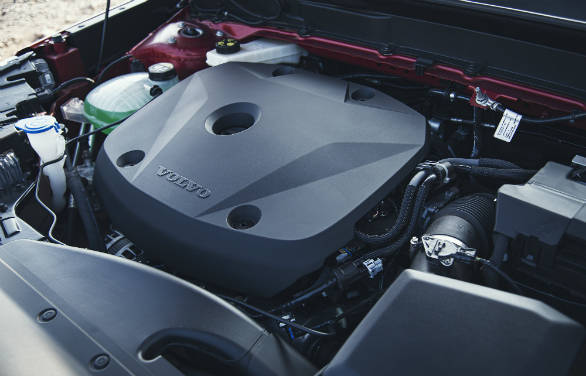 At the heart of the XC40 T4 is a 1,969cc four-cylinder turbo petrol that makes 190PS at 4,000 rpm and 300 Nm at 1,750rpm. These outputs are typical of this segment and this motor performs as so. It will handle pretty much everything you ask of it in regular use. Power is available through the range and only tapers off beyond 4,000 rpm. In practice, this means that pottering around in the city or at highway speeds the engine does its own thing and will always have a reserve of power available. The only drawback is the NVH levels, the motor is audible in the cabin over 3,000 rpm. This is especially noticeable because there isn't much tyre or wind noise to drown this out. 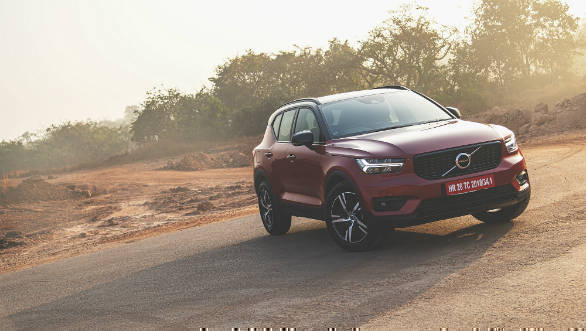 Much of the engine's easy demeanour is down to the Aisin eight-speed automatic that it pairs with. This is the same unit as in other Volvos and gives you one or two ratios more than the XC40's competitors. Like the engine, the gearbox is competent, and more often than not finds itself in the correct ratio. It's no BMW-tuned ZF, but in situations where the XC40 is at its happiest, the gearbox is a good companion. Reaction times could have been a touch better, especially around medium speed part-throttle applications but its never intrusive to the car's progress. Another oddity we noticed was the 'box's overzealousness at dropping down a gear around these speeds even when it's not really needed. The causes the motor to surge ahead but you aren't really going any faster for it. But all of these minor niggles can be solved by using the nice-feeling rubberised paddle shifters, where the gearbox will let you rev all the way to the redline.

Drivers can choose from four drive modes, we found Comfort to be the best suited to the XC40's calming demeanour. This SUV is best enjoyed at six or seven-tenths of its capability, and the Comfort mode is just fine. There's the right amount of heft to the steering and some of the gearbox's part-throttle fallacies are better controlled. We also liked the Eco mode, it's not overly conservative and can be a mode you drive in all the time. An Off-Road mode is available at low speeds, but given that this version loses out on AWD, is expected to have limited effectiveness. 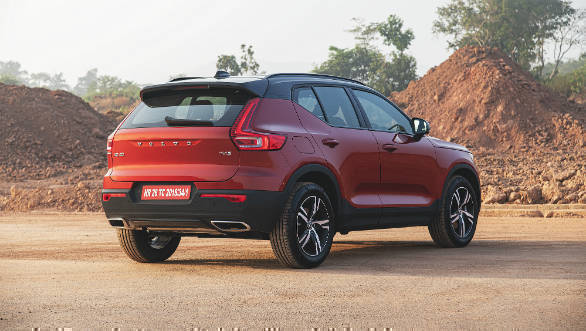 Over smooth roads, the SUV is rock steady with no real discomfort but put it through a scarred and potholed patch, and more imperfections are passed into the cabin. Larger potholes are met with a loud thud and the standard steel springs pass much of the impact into the cabin. Mind you, all of these movements are very well controlled, but most luxury car makers in India have managed to make sure that you feel very little of it, to begin with. Drive the XC40 spiritedly and its CMA platform's inherent balance is clearly evident, it seems to have carried this trait over from the larger SPA platform it is derived from. There is lean around a corner, but nothing beyond what you would expect from something with 210 mm ground clearance. The snag here is the protective traction control system. It intervenes early, seemingly to compensate for the absence of the added grip of an AWD system. This is true even in Sport mode, which means that if its corner-carving capability you want, look towards the BMW X1. 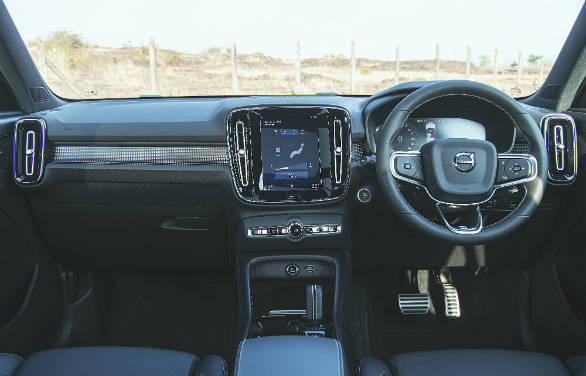 The Volvo XC40 was never such an award-winning package for its drivetrain, and with this petrol version, Volvo has done well to not mess with the bits that are most appealing about this SUV. The T4 is currently available in the sporty-themed R-Design mid-spec variant, but handily beats cars from even a segment higher in features and cabin ambience. The nine-inch Sensus infotainment screen, the digital instrument cluster and the overall theme of the cabin are all from much more expensive Volvos. Feature highlights are the wireless charging, the panoramic sunroof, the 14-speaker Harman-Kardon sound system, and the infinitely adjustable front chairs with lumbar support and extendable squabs. 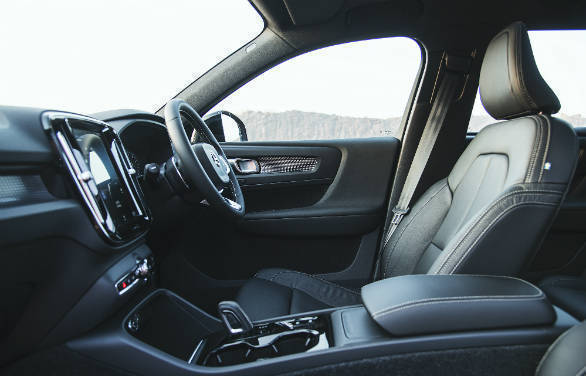 The 2,702mm wheelbase is the longest in this class, and this has been put to good use in the cabin. There's loads of legroom for rear passengers and even with the full black cabin, there is a lightness anywhere you sit. This time around, the orange highlights have been given a miss, but the thoughtful use of materials and textures mean that the cabin never feels one-dimensional. Only the plastic quality in the lower half of the dash could have been better, it seems a grade or two below the rest of the car. Other minor inconveniences are the small viewing range of the rear camera and a rear seat that could have come with more under-thigh support and softer cushioning. 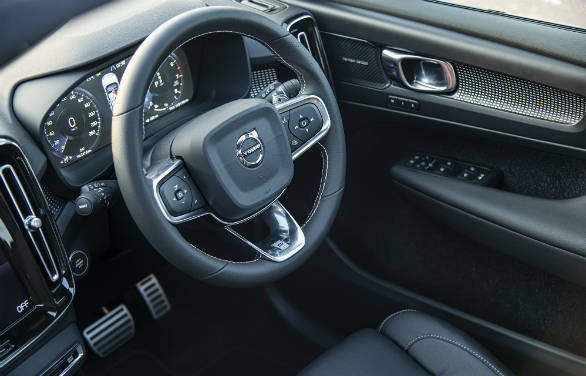 Other carmakers might have caught up with Volvo's safety credentials in recent memory but with the XC40 the Swedish brand is far ahead of the curve again. You get lane-keeping assistance, lane departure mitigation and adaptive cruise control, aside from airbags for all occupants. Most of these segment firsts. The XC40 also has a five-star Global NCAP rating

The XC40 T4's flaws are minor, but at Rs 39.90 lakh ex-showroom, easily forgivable given the competitive pricing. It looks the most striking, in a segment where its competitors all have a whiff of the hatchback about them. The unending comfort and safety features alone are a deal-maker in our books, but you also get the best cabin in this segment. 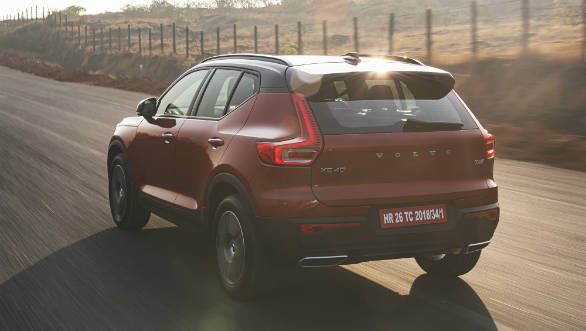 But XC40's biggest strength seems to be how honest it is. In a market where SUVs all seem to be somewhat apologetic of their inherent weaknesses, the XC40 has no sense of pretence. It's calming demeanour, and focus on genuine luxury means that it's easily likeable. As I finish writing this, I'm not left underwhelmed. The anticipation doesn't feel unwarranted. But then maybe the XC40 was never unobtanium, it's just how an SUV is meant to be.