The original Toyota Fortuner was an enormous, powerful machine that made all manner of cars humbly move out of its way. The automotive equivalent of the mighty elephant, other cars gave it a respectfully wide berth and no one messed around. Now though, the handsome brute has had a makeover that has taken it from rough and wild to suave and polished. Think of it as Sylvester Stallone finishing up a gruelling day of killing commies on the sets of Rambo and then cleaning up to attend the Oscars. Sure, he looks all smart and sophisticated, but you know damn well that lurking under that sleek tuxedo is a mass of pure muscle that will crush you up like a paper ball without breaking a sweat.

In that sense, the new Fortuner still gets the same respectful distance in traffic, but it is preceded by something new - people now stare and point. Those sleek and flashy lights along with the huge chrome grille and pinched rear window line really do stand out. It may look different but it's still massive, even bigger than the old Fortuner in length, width and height, while wheelbase remains the same. Those who like to be seen will love what this Toyota can do for their image. I like it too, but there are some things I'm not completely fond of. The giant vertical chrome bars on either side of the grille seem out of place, and I'm worried that these fresh metrosexual looks take away from the Fortuner's rugged intent. For example, I'm not sure how a heavy-duty Ironman style metal bumper, winch and snorkel would look on this face 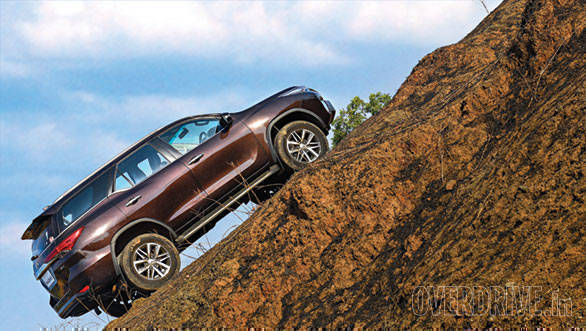 Of course, there are some off-road focused features on the outside like the solid-feeling running board that short people will appreciate while climbing into the cabin. Once in, the first thing you notice is the driving position. We auto journalists love to use the words, 'commanding driving position', but the Fortuner actually forces you to think deeply about what it means. You sit so high up in the electrically adjustable chair, it conjures up images of a high and mighty king being carried around on an oppressively heavy throne by his many slaves. Pardon my overactive imagination; the fact is that the Fortuner has a supremely commanding driving position! The cabin itself has received a big overhaul and while it isn't exactly royal, it's a big step-up. In typical Toyota fashion, the cabin isn't a revolutionary or stunning design but simply feels very well put-together and built to last. The leather and faux metal trim on the centre console add some class, but the simple digital clock and climate control panel could have easily come off a car from the last decade. Below the single-zone climate control unit lie big, chunky buttons for ESP, hill hold and a new rotary knob for the four-wheel drive system. While the old Fortuner was a full-time four-wheel drive, this one gives you the choice to shift from the standard two-wheel drive to four-wheel drive. There's also a four-wheel drive low ratio for when you get into very sticky situations.

As you would expect, space within the cabin is very generous. Middle-row passengers have ample room, and the seats slide forward and back to liberate space for third-row passengers. The third row is acceptable, but it is interesting to note that a Honda BR-V offers both more space and better ingress for third-row passengers. The last row also feels a little closed off thanks to the reduced rear window line. Middle and rear passengers are kept comfortable by a roof-mounted AC and there is a charging port in every row. The Fortuner has an electric-opening tailgate and an auto up-down feature for all windows. Both are nice features but it also lacks in some areas - there's no sunroof, the outside mirrors don't auto-fold and the inside mirror doesn't auto-dim at night. 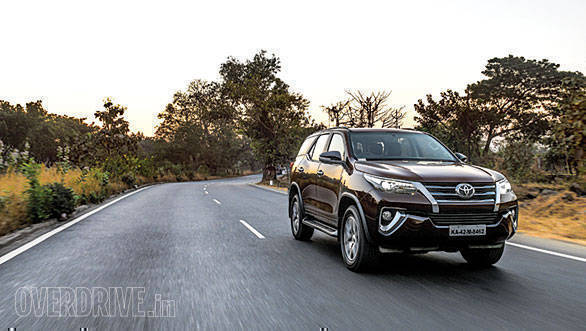 The Fortuner runs the same 2.8-litre turbo diesel from the Innova Crysta, and it provides strong performance. The motor feels more modern than the outgoing 3.0-litre D4d diesel engine in almost every way. The engine is more rev happy and provides more eager performance. At 177PS, it also makes 6PS more than before, but torque has shot up substantially, from 343Nm to 450Nm on the automatic (the manual version gets 420Nm). The engine is quite refined with both roughness and the typical diesel clatter well controlled, but it does have a rather loud note. The Fortuner gets a 6-speed automatic gearbox with the choice to manually shift gears either through the shift lever or by steering-mounted paddles. Strangely, whenever manual mode is selected, the digital screen in the instrument cluster indicates that the car is in 4th gear, even if you're crawling in what is obviously first gear traffic. Changing gears after this causes in change in the number displayed but it isn't always accurate.

The Fortuner offers an Eco mode that reduces throttle response and sets early gear shift point. There's also a Power mode that makes the car feel noticeably quicker with sharper responses and allows the gearbox to hold onto gears for longer. Despite its bulk, the Fortuner isn't too much of a slouch taking 12.3s from 0-100kmph and with plenty of surge available on demand for quick overtakes. Likewise, braking is impressive as well  the Fortuner coming to a dead stop from 100kmph in 3.2s and 43.8m. 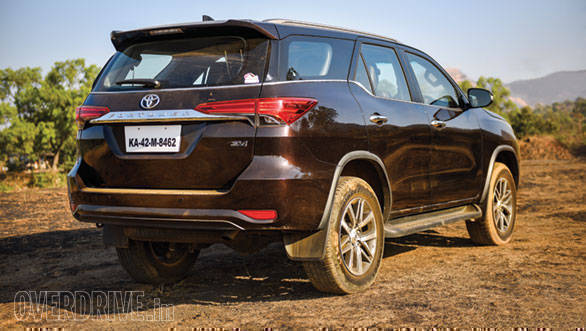 For such a large vehicle, the Fortuner returns decent fuel efficiency  11.9kmpl in the city and 17kmpl on the highway  resulting in an overall 13.2kmpl.

Ride quality is the one area where the new Fortuner both surprises and disappoints. The surprise is in the fact that this vehicle is not as soft and squishy as you would expect. Body roll in corners isn't excessive, and there isn't much nosedive under braking as well. In that sense, this is a big improvement over the old Fortuner, and while it is far from a sharp handler, it is definitely a step ahead. The disappointment comes in the subtle but constant jiggle that creeps through the suspension at all speeds. The Fortuner never settles into a smooth cruise and constantly produces a slight judder. At first I thought it was due to our rough concrete roads, but even on the Bandra-Worli Sea Link, Mumbai's smoothest tarmac road, the Fortuner still displayed the same behaviour, albeit more subdued. You soon get used to it, but it never truly feels comfortable. 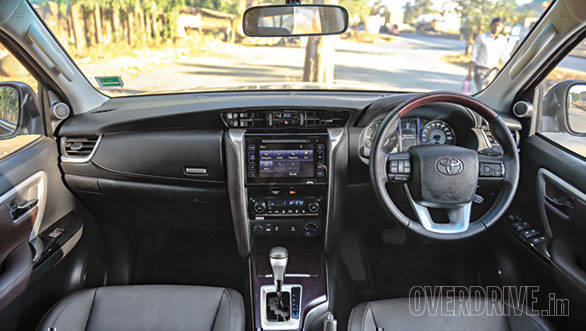 No Fortuner test would be complete without taking the vehicle off-road, and this is where it really shines. It may look all up-market and fancy on the outside but make no mistake, this is still a hard-core SUV! I'm no off-road expert but I was really impressed with the Fortuner's ability to find traction and climb almost any obstacle I pointed it at. When the wheels eventually started to spin, the selectable low-ratio mode helped it put the power down and extract itself out of some serious terrain. The 225mm ground clearance is plentiful, approach and departure angles are generous and there is impressive wheel articulation. Best of all, the Fortuner has a rugged, impervious feel off-road, and there's no fear that you might break something. I really hope owners get to experience this side of their machines; it's the Fortuner's biggest virtue. 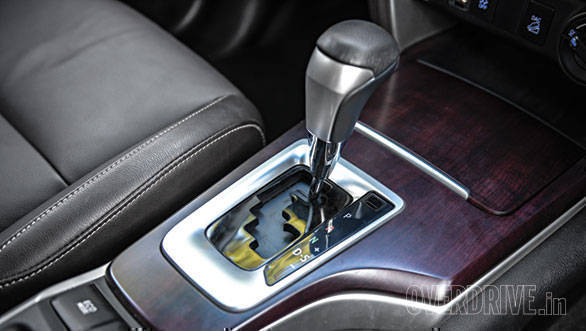 Like every car out there, the Fortuner prices have risen rapidly over the last few years, and the vehicle is now priced between Rs 35-39.7 lakh on-road in Mumbai. That's a lot of money, and I'd advise those looking for a chauffeur-driven vehicle primarily for road use to consider other options, perhaps like this one. As far as rugged full-sized SUVs go, there isn't really much choice apart from this and our SUV of the year, the Ford Endeavor. As to which is better, hold on for a little longer; we have a very interesting story planned! 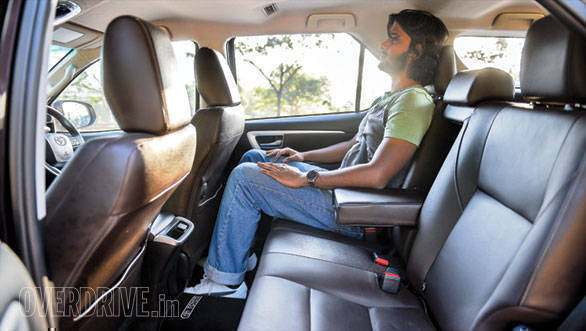 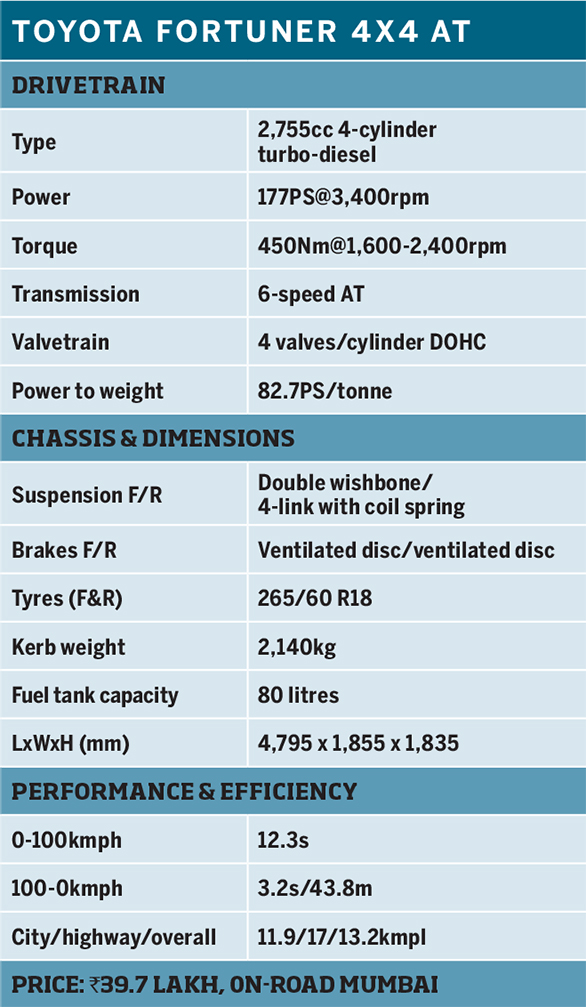